Home 设为首页 | News & Events | U.S. Statement to the 61st Session of the Commission on Narcotic Drugs 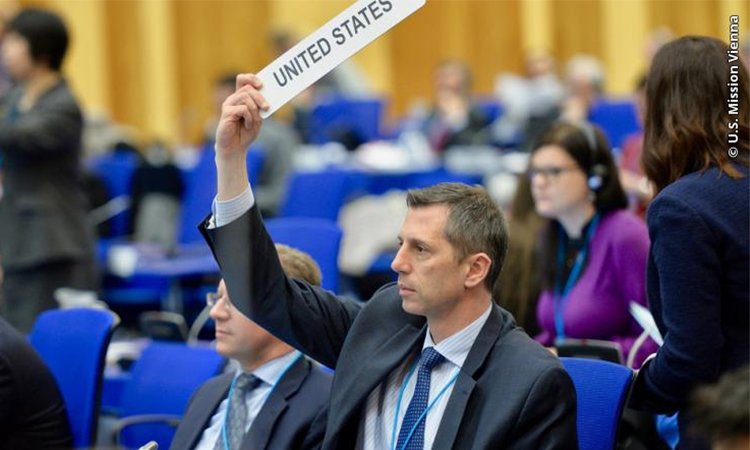 Thank you, Madam Chairman, for the opportunity to deliver remarks at the 61st session of the CND. Thank you also to the Secretariat for its tremendous work in preparing our conference. The United States expresses its appreciation for the partnership, investment, and fellowship within this body to address the complex and ever-evolving challenges presented by the world drug problem.

Now more than ever, our work in the Commission is vital to protecting the health and security of all our citizens. The world drug problem is ever-evolving and changing. Today, we are in the midst of a new drug trafficking paradigm where international criminal organizations trafficking in drugs are evading international controls by creating synthetic drugs – new psychoactive substances (or NPS) – that are mirror images of controlled substances. The UN Office on Drugs and Crime’s Global Synthetics: Monitoring, Analysis, Reporting, and Trends (SMART) program March 2018 update reports that these criminal organizations are producing at least one of these new substances every week, with SMART identifying 70 new substances in 2016 alone.

In this new paradigm, traffickers are also exploiting the online market through open and dark net sites, and then trafficking these substances through the international mail and express consignment shipments. What’s more is that these substances are shipped in small quantities – a couple milligrams for example – making these packages difficult for law enforcement and regulatory officials to identify and intercept.

The dramatic increase in the misuse of synthetic drugs, particularly synthetic opioids – like carfentanil – is plaguing many of our countries. According to UNODC’s 2017 World Drug Report, opioid misuse remains high in Southwest Asia and Eastern Europe, and has been expanding in Western Europe and others parts of North America. An estimated 190,000 deaths globally are attributed to drug use disorders, mostly among people using opioids.

Fighting this plague is also exacting a grisly human toll among many of our law enforcement colleagues. In 2015 and 2016, Colombia lost 290 Ministry of Defense forces and over 3,000 wounded. 2017 was one of the bloodiest years on record in Mexico with over 29,000 murders, including many valiant members of Mexico’s security services battling transnational criminal organizations.

Clearly, this international problem requires a smart, strategic, and coordinated international response, and our decisions here at the CND matter. We must work as an international community to curb this new paradigm in drug trafficking – lives depend upon it. We must work together to identify innovative options to curb the rapid proliferation of these new synthetic drugs. Some of the most dangerous substances in this category are synthetic opioids. Synthetic opioids are fueling thousands of deaths in many of our countries because they are incredibly lethal and difficult to detect.

One of the most dangerous synthetic opioids being trafficked in international criminal markets is carfentanil, which is 10,000 times more potent than morphine. It is an elephant tranquilizer, not approved for use in humans, that has made its way into the illicit drug market, and is being used, sometimes unknowingly. To hinder criminal access to carfentanil and reduce its presence in the illicit drug market, the United States requested that it be controlled under the UN Single Convention on Narcotic Drugs – the 1961 Convention. The World Health Organization’s (WHO) Expert Committee on Drug Dependence (ECDD) reviewed this request and concluded that carfentanil should be controlled under Schedules I and IV and we urge the Commission to vote in favor of this request this week. Broader controls of synthetic drugs is one way we can work together as a community to address this problem.

The United States has also sponsored a resolution this week aimed at enhancing international cooperation to address the threats presented by synthetic drugs, particularly these deadly synthetic opioids. The resolution promotes and amplifies existing tools within UNODC and the INCB to increase information sharing and data collection and analysis that can facilitate real-time cooperation among experts in the field to disrupt the illicit supply of synthetic drugs, and the chemicals used to produce them. The information derived through these efforts can then be used by the WHO to accelerate reviews of substances for international control. Currently, the international community is controlling these substances at a rate of about ten a year. We have to do better. The ideas offered in this resolution – increased information sharing and international cooperation – present options for us to more aggressively attack this threat together. We look forward to discussing the text with you this week, and hope we can mobilize a strategic and coordinated response to this challenge.

Another option to curb this threat is to generate a better understanding of the new drug trafficking pattern whereby synthetic drugs are being sold online and trafficked through express consignment shipments and the mail. To explore this new pattern, the United States sponsored a side event on “New Methods of Synthetic Drug Trafficking” with expert panel presentations on challenges and experiences related to synthetic drugs being sold and trafficked through this method. Through this event, we highlighted the new paradigm, whereby dangerous and deadly synthetic drugs, such as carfentanil, can easily arrive anywhere with an internet connection and international delivery services. With synthetic drugs being so potent, a small amount can be easily shipped and often has higher profit margins than other narcotics.

When you combine these new modalities with a large supply of heroin being trafficked into your country by sophisticated transnational criminal organizations, along with an increase in demand fueled by an excess of prescriptions pills, you have a crisis; a crisis where thousands of my fellow Americans are dying annually. In 2016, nearly 64,000 people died from drug overdoses in the United States. Of these 64,000, over two-thirds, died from overdoses involving prescription or illicit opioids, including fentanyl. And we are not alone here.

This new trafficking pattern shows that we are all vulnerable. Anyone with an internet connection and access to international mail can be next. So the world must be vigilant and respond to this new threat. Whether it is fentanyl or tramadol, or another a new synthetic concocted by a rogue chemist, it is imperative that we work together to get ahead of this problem; we must be proactive, not reactive.

In thinking proactively, we should prioritize life-saving efforts to address this international crisis beyond the 2019 High-Level Ministerial Segment of the 62nd CND. The “beyond 2019” drug-policy trajectory must focus on this “new reality.” In the 2016 outcome document from the UN General Assembly Special Session on the World Drug Problem (UNGASS), we highlighted the rapid proliferation of synthetic drugs, or NPS, as one of these new realities to be prioritized. The outcome document represents the latest international consensus that reaffirms the Commission’s primary role in international drug policy. On the road to 2019 and beyond, we want the Commission implementing the operational recommendations in the outcome document to promote a society free of drug abuse, with an acute focus on working together to address the new realities of “today’s” world drug problem.

Again, I am very excited to be here to work through these issues. Thank you.