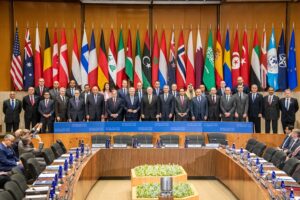 On November 18, 2019, , the United States sanctioned nine individuals and organizations who were providing material support to the terrorist group ISIS in the Middle East and South Asia.  ISIS remains a threat to global security and stability, and the United States continues to work closely with the countries of the Global Coalition to Defeat ISIS (D-ISIS) to ensure we are protecting our people from this heinous terrorist group.

On November 14, 2019, the United States hosted a D-ISIS Small Group Ministerial to reaffirm our unity and common purpose in securing ISIS’ enduring defeat.  The work of the D-ISIS Coalition remains vitally important to these efforts and the ministerial exemplifies our commitment to maintaining pressure on ISIS, to destroying its remnants in Iraq and Syria, and to thwarting its global ambitions.

The United States has made significant progress in disrupting ISIS’ financial networks, and it will continue to adapt as ISIS looks for new ways to generate and move funds.  We will also work with our partners in the Counter ISIS Finance Group and the United Nations to nominate additional ISIS targets to the UN ISIL (Da’esh) and Al-Qa’ida Sanctions List.

For additional information, please refer to the Department of the Treasury:  https://home.treasury.gov/news/press-releases/sm831