The U.S China relationship is marked not only by political milestones but also by deep personal connections between the people of our two countries. Prior to being sworn in, many of our Ambassadors have had deep rooted connections to China. Some were students in China, studying Mandarin in Beijing; some were born in different provinces of China. 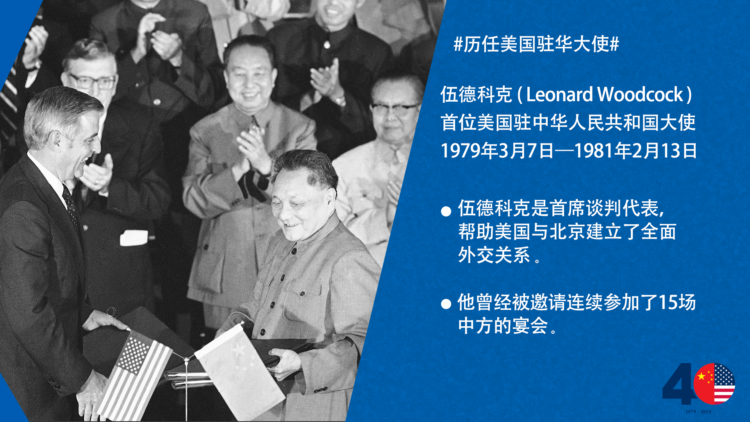 Leonard Freel Woodcock (February 15, 1911 – January 16, 2001) was an American labor union leader and the president of the United Automobile Workers (UAW) from 1970 to 1977. In 1977 he retired from the UAW and was named head of the U.S. liaison mission in the People’s Republic of China by U.S. President Jimmy Carter. Woodcock played a pivotal role in negotiating the establishment of full diplomatic relations between the U.S. and China during the Carter administration; was appointed the U.S. Ambassador to the People’s Republic of China in 1979; and helped open the U.S. Embassy in Beijing. He was the United States’ first ambassador to China since World War II, and served in that capacity until 1981. Woodcock later taught political science at the University of Michigan. 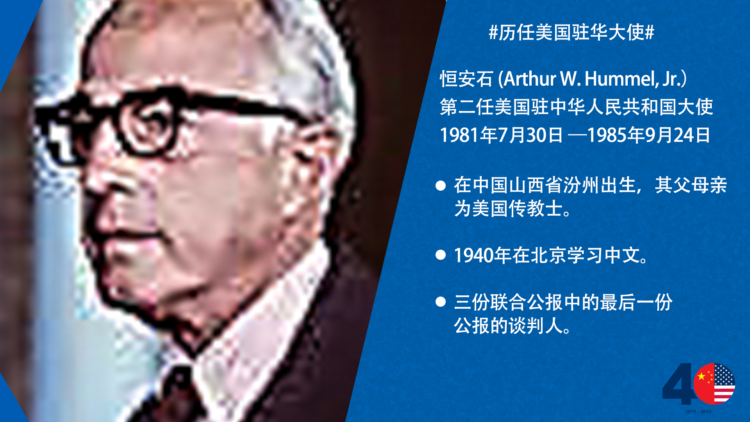 Hummel earned a master’s degree in Chinese studies from the University of Chicago, then joined the Department of State in 1950. In the course of his long career, he served as Assistant Secretary of State for East Asian and Pacific Affairs and had a number of ambassadorial stints, including Burma, Ethiopia and Pakistan. The highlight of his career came with his assignment from 1981-1985 as Ambassador to the People’s Republic of China. Ambassador Hummel was Chief negotiator of the US-China Joint Communiqué on US Arms Sales to Taiwan in 1982, under which the United States stated its intention to reduce arms sales to Taiwan gradually and reaffirmed its view that ”there is but one China.” After his retirement, Hummel served as chairman of an advisory council at the Johns Hopkins University-Nanjing University Center for Chinese and American Studies, based in Washington.

Winston Lord was the principal architect of the 1972 Shanghai Communique which opened relations with China.

His wife is Bette Bao Lord, who was born in China and the author of the novel ‘Spring moon.’ 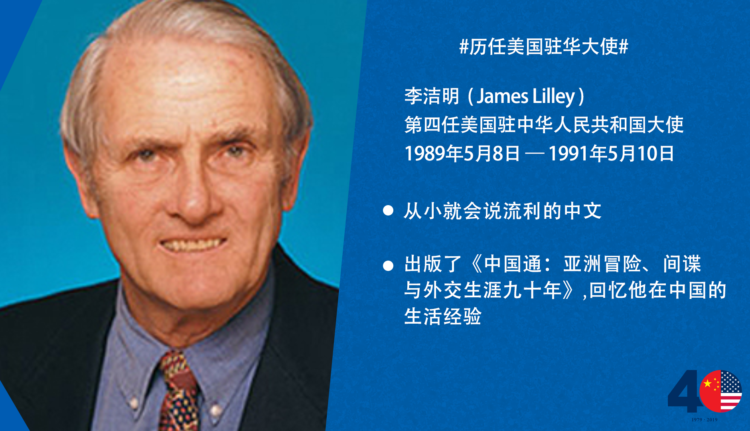 James R. Lilley was born in Qingdao, China on January 15, 1928. He was the Director of the American Institute in Taiwan from 1981 to 1984; was appointed Deputy Assistant Secretary of State for East Asian Affairs in 1985; was also the U.S. ambassador to the Republic of Korea from 1986 to 1989; and to the People’s Republic of China from 1989 to 1991. Ambassador Lilley is the only American to have served as head of U.S. missions in both China and Taiwan.

James R. Lilley earned his M.A. in international relations at George Washington University and his B.A. at Yale University. Prior to his career with the State Department, Lilley served with the CIA in Laos, Tokyo, Hong Kong, and Taiwan. In 2004 he published a memoir titled “China Hands: Nine Decades of Adventure, Espionage and Diplomacy in Asia.”

He spent much of his career in East Asia, where his assignments included Bangkok, Hong Kong, Taipei, Beijing, Singapore, and Jakarta. A three time ambassador, he acted as the top U.S. envoy in Singapore (1984-1986), the People’s Republic of China (1991-1995), and Indonesia (1996-1999) and in 1996 he was promoted to the rank of Career Ambassador, the highest rank in the Foreign Service. Ambassador Roy’s final post with the State Department was as assistant secretary for Intelligence and Research, retiring from the Foreign Service in January 2001 after serving the U.S. Department of State for 45 years. After his retirement, Ambassador Roy joined Kissinger Associates, Inc., a strategic consulting firm, as Managing Director in 2001. 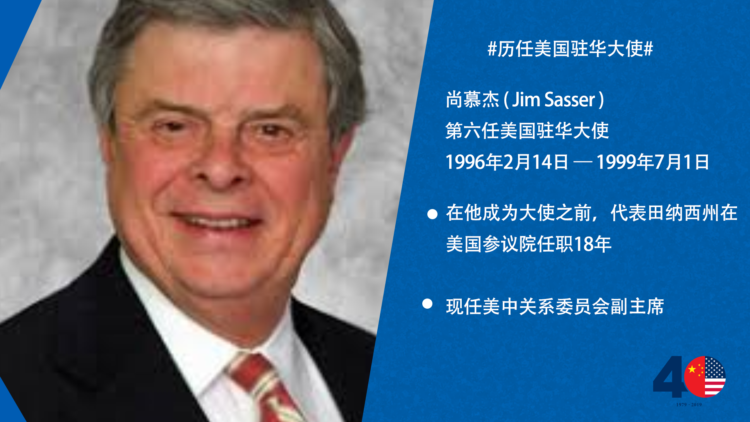 James Ralph Sasser (born in 1936) was an attorney with the Nashville law firm of Goodpasture, Carpenter, Woods, and Sasser from 1961-1977. He served eighteen consecutive years from 1977-1995 as the junior and later the senior Senator in the U.S. Senate. After leaving the Senate, Sasser became a Fellow in the Kennedy School of Government, Harvard University in 1995. He was appointed ambassador to the People’s Republic of China by President Clinton in September 1995 and served until 1999.

Joseph W. Prueher (born in 1942) served as the U.S. Ambassador to the People’s Republic of China from November 1999 to May 2001.Prior to assuming duties in China he served as a Consulting Professor and Senior Advisor to the Stanford-Harvard Preventive Defense Program and a Senior Fellow at the Center for Naval Analysis. Admiral Prueher completed 35 years of service in the United States Navy in May 1999, and was Commander-in-Chief of the U.S. Pacific Command from 1996 until his retirement from the Navy.

Clark T. Randt, Jr. is the longest serving United States Ambassador to the People’s Republic of China. He was a resident of Beijing from 1982 through 1984 where he served as First Secretary and Commercial Attaché at the U.S. Embassy. He then lived in Hong Kong for 18 years, most recently as a partner with the international law firm of Shearman & Sterling where he headed the firm’s substantial China practice. He is a member of the New York and Hong Kong bars and is a recognized expert on Chinese law.

In 1974, Mr. Randt was the China representative of the National Council for United States-China Trade and, from 1968 to 1972, he served in the United States Air Force Security Service.

Jon Huntsman was elected twice as Governor of Utah, including in 2008 with a record percentage of the vote, including the majority in all 29 counties.
Huntsman’s public service career began as a White House staff assistant to President Ronald Reagan and has since included appointments as Deputy Assistant Secretary of Commerce for Asia, U.S. Ambassador to Singapore and Deputy U.S. Trade Representative. As a U.S. Trade Ambassador, Huntsman negotiated dozens of free trade agreements, trade and investment framework agreements and brokered other bi-lateral and multi-lateral trade agreements for the United States with China, Taiwan, Singapore, Australia, India, Vietnam, West Africa, South Africa and other Asian and African nations. He played a critical role in launching global trade negotiations in Doha, Qatar in November of 2001, guiding the simultaneous accession of China and Taiwan into the World Trade Organization.

He has served in the administrations of five Presidents and was a candidate for the 2012 Republican presidential nomination.

Huntsman’s breadth of experience in Asia has been developed over a lifetime of interest and involvement. He has previously lived in Asia three times and speaks fluent Mandarin Chinese. He is currently the U.S. Ambassador to Russia. 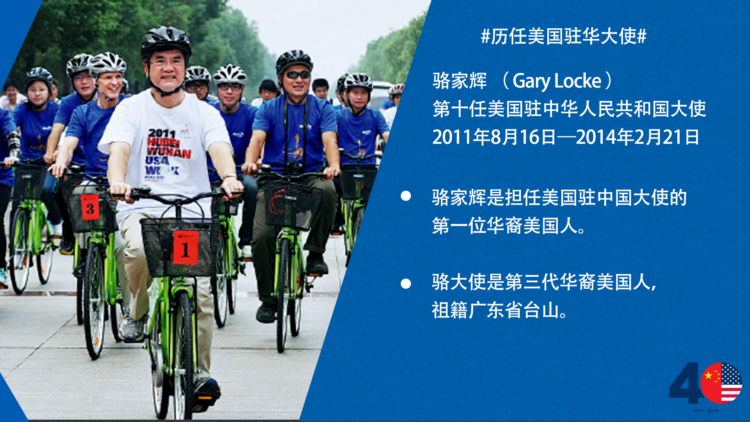 Ambassador Gary Locke was born in Seattle, Washington, on January 21, 1950. He is the first Chinese-American to serve as Ambassador to China, as Secretary of Commerce and as Governor. His grandfather emigrated from China to Washington State, initially finding employment as a servant, working in exchange for English lessons.

His father, also born in China, was a small business owner, operating a grocery store where Ambassador Locke worked while receiving his education from Seattle’s public school system. He was Governor of Washington from 1997 to 2005, and Ambassador to China under the Obama Administration from 2011 to 2014. 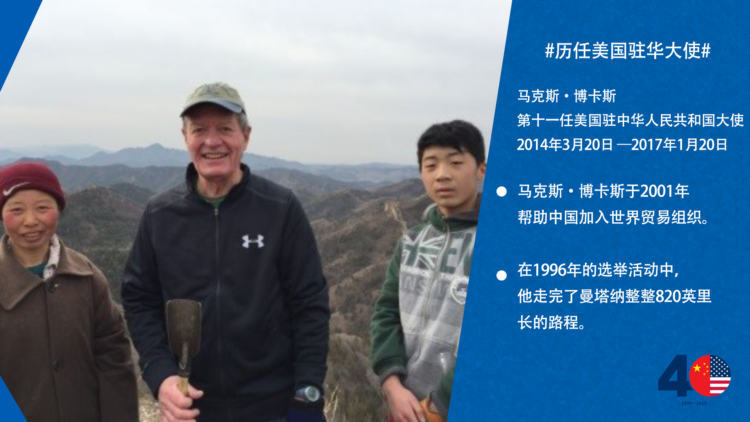 Ambassador Baucus formerly served as the senior United States Senator from Montana. He served in the U.S. Senate from 1978 to 2013, was Montana’s longest serving U.S. Senator, and had the third longest tenure among those serving in the U.S. Senate.

During his tenure on the Senate Committee on Finance, Ambassador Baucus was deeply involved in orchestrating congressional approval of permanent normal trade relations with China in 2000 and in facilitating China’s entrance into the World Trade Organization in 2001.

Ambassador Terry Branstad was born, raised and educated in Iowa.

He was Iowa’s longest-serving governor, from 1983 to 1999. Following his four terms as governor, Branstad served as president of Des Moines University (DMU). In October of 2009, sensing a need for change in the way state government operates and wanting to “lead Iowa’s comeback,” Branstad retired from DMU and was elected governor again in 2010.

Terry Branstad’s relationship with President Xi Jinping stems back to 1985 when the Chinese President, then a young official from Hebei Province, headed a five-man agricultural delegation to Iowa.

He and his wife Chris have three children and seven grandchildren.