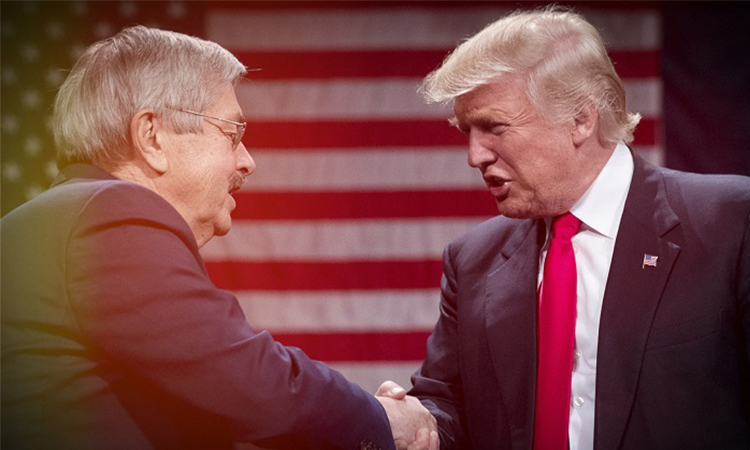 U.S. Ambassador to China Terry Branstad will soon arrive in Beijing as the personal representative of the U.S. President to China.  In advance of his arrival, Ambassador Branstad, who was sworn in on May 24, recorded a video message for the Chinese people: http://www.iqiyi.com/v_19rr7uhp10.html

Ambassador Branstad is the longest-serving governor in American history.  He served as governor for the state of Iowa for six terms — a cumulative twenty-two years.

“Terry is a true legend,” said U.S. President Donald Trump in Iowa on June 21 with Ambassador Branstad. “The people of Iowa first made him governor in 1983…Under Terry, Iowa’s economy is stronger, its farmers more successful, its schools better, its communities more prosperous, and its citizens safer… His legacy will endure for a long, long time in this state.”  President Trump expressed gratitude for the work Ambassador Branstad did as governor, saying,  “Mr. Ambassador, thank you very much. And have a good time in China.”

During his first term as governor, Ambassador Branstad signed the formal agreement establishing the sister-state relationship between Iowa and China’s Hebei province in 1983.  He visited Hebei for the first time in 1984 and hosted President Xi Jinping, then a county-level party leader, for his first visit to Iowa the following year, in 1985.  During the six trade missions he led to China as Iowa Governor, Ambassador Branstad saw first-hand the importance of a positive and healthy U.S.-China trade relationship.

Ambassador Branstad noted on June 21 that, “For a farm kid from Iowa, my life’s ambition was to serve the people as governor.  I never imagined in my wildest dreams that President Trump would ask me to represent all of the United States of America in China.  I will do my very best… I am honored and proud to represent the United States of America and President Trump in the People’s Republic of China.”

Ambassador Branstad is a graduate of the University of Iowa and holds a Juris Doctor degree from Drake University.