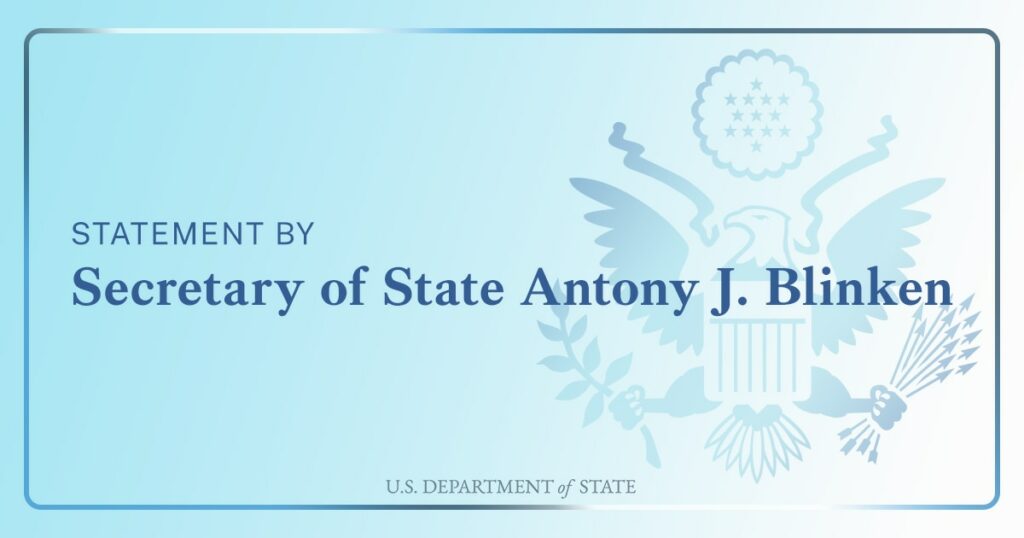 As President Putin’s unprovoked and unjustified war enters its fourth month, the United States recognizes the staggering human toll of Russia’s aggression in Ukraine.  Civilian casualties continue to mount, as do widespread reports of war crimes and other atrocities perpetrated by Russia’s forces in Ukraine.  As the people of Ukraine continue to fight bravely against Russia’s brutality, we will continue imposing severe costs to hold President Putin accountable for his utter disregard for human rights and fundamental freedoms. We also will hold to account those involved in his war of choice, including those suspected of taking part in atrocities and human rights abuses against civilians.

Today, the United States, in coordination with our allies and partners, is taking further actions to increase the pressure on the Russian Federation by designating the executives and board members of two of Russia’s most important banks, Sberbank and Gazprombank; a Russian state-owned bank, Moscow Industrial Bank, and 10 of its subsidiaries; and a state-supported weapons manufacturer, Promtekhnologiya.

Further, following our recent port ban, we continue to target Russia’s maritime defense logistics capabilities by designating the Ministry of Defense’s shipping company and six other maritime shipping companies that transport weapons and other military equipment for the Government of Russia, while identifying 69 of their vessels as blocked property.  Additionally, we are designating Fertoing, a specialized marine engineering company that produces remotely operated subsea equipment, among other activities.  Fertoing will now be blocked from accessing critical U.S. technologies.

In addition, the Treasury Department is designating Russia-1, Channel One, and NTV, all of which are directly or indirectly state-owned and controlled media within Russia, spreading disinformation to bolster Putin’s war.  These television stations have been among the largest recipients of foreign revenue, which feeds back to the Russian state.  The United States remains a steadfast champion for media freedom.

We are also taking steps today to impose visa restrictions on over 2,600 Russian and Belarusian military officials who are believed to have been involved in actions that threaten or violate the sovereignty, territorial integrity, or political independence of Ukraine.  Included among this group are personnel who reportedly took part in Russian military activities in Bucha, the horrors of which have shocked the world.  We are further announcing a new visa restriction policy targeting Russian Federation military officials and Russian-backed or Russian-installed purported authorities who are believed to have been involved in human rights abuses, violations of international humanitarian law, or public corruption in Ukraine.

In addition to holding the Lukashenka regime accountable for its complicity in enabling the Kremlin’s war, we continue to promote accountability for those involved in the decades-long violent repression of the political opposition in Belarus.  In that context, the State Department has designated three Belarusian officials, Dzmitry Paulichenka, Yury Sivakov, and Viktar Sheiman, pursuant to Section 7031(c) of the Department of State, Foreign Operations, and Related Programs Appropriations Act for their involvement in gross violation of human rights, namely the enforced disappearance of at least one of Lukashenka’s political opponents in 1999.  Under this authority, immediate family members are also ineligible for entry to the United States, to include Viktar Sheiman’s wife, Elena Sheiman, and his adult son, Sergei Sheiman.

Finally, the United States is cutting off Russia’s access to certain key services from U.S. companies that the Russian Federation and Russian elites use to hide their wealth and evade sanctions.  We are prohibiting U.S. persons, wherever located, from providing accounting, trust and corporate formation, and management consulting services to any person located in the Russian Federation, under Executive Order (E. O.) 14071.  We are also identifying the accounting, trust and corporate formation services, and management consulting sectors of the Russian economy pursuant to E.O. 14024, which will allow the United States to target any person who operates or has operated in these sectors of the Russian Federation economy.

Our actions today complement previous steps we have taken with our allies and partners since the beginning of Russia’s unconscionable war.  As long as the Russian Federation continues its aggression against Ukraine, the United States will continue implementing new economic measures against Russia, in particular against its institutions and elites enabling the destruction of entire cities and the killing of thousands of civilians in Ukraine.

For more information on today’s action, please see the Department of the Treasury’s press release and State Department Fact Sheet.