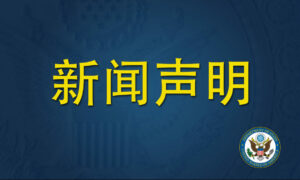 U.S. DEPARTMENT OF STATE
Office of the Spokesperson
For Immediate Release

We are alarmed that Pastor Wang Yi, leader of the Early Rain Covenant Church in Chengdu, was tried in secret and sentenced to nine years in prison in connection to his peaceful advocacy for religious freedom. We call for his immediate and unconditional release.

Pastor Wang Yi was originally arrested with dozens of other congregants on December 9, 2018, during a massive crackdown on Chengdu’s largest unregistered church. He was found guilty during a closed-door trial December 26 on trumped-up charges of “inciting subversion of state power” and “illegal business activities,” with no defense lawyer present.

This is yet another example of Beijing’s intensification of repression of Chinese Christians and members of other religious groups. We continue to call on Beijing to uphold its international commitments and promises made in its own constitution to promote religious freedom for all individuals, including members of ethnic and religious minorities and those who worship outside of official state-sanctioned institutions.