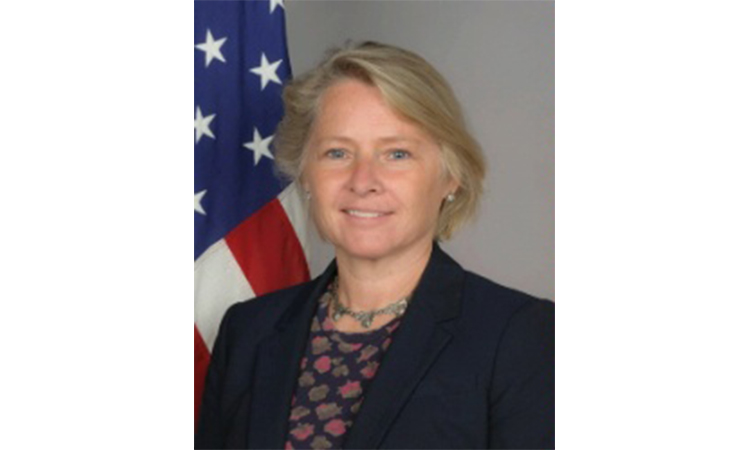 Chairman Corker, Ranking Member Menendez, members of the committee, it is my great honor to appear here today as the President’s nominee to serve as Assistant Secretary of State for East Asia and Pacific Affairs.  I have been privileged to serve this great country of ours, and to have worked with so many dedicated and talented public servants over the course of my Foreign Service career.  I would like to thank the President and Secretary Tillerson for placing their trust and confidence in me.  If confirmed, I pledge to this Committee that I will devote my full energies to advancing America’s interest in the East Asia-Pacific region.

I’d like to take this chance to thank my family, my husband Joe and daughter Kate, who are here today, my two older children Ben and Anne, who both went to three different high schools as we moved from place to place, and my Mom and Dad.  They have been an incredible support network and have all sacrificed a lot to get me here.  I want to express my profound gratitude to all of them.

I joined the United States Foreign Service more than 25 years ago now, and have served five different administrations in postings from Beijing to Moscow, Ashgabat to Chengdu, and of course Washington.  I have worked on issues from non-proliferation to trade agreements to human rights, and many important issues in between and have never ceased to reflect on how lucky I am to have this wonderful career.  Several of my former colleagues in this position have reached out to me in recent months and all wanted to make sure I knew that this is the best job in the world.  I am certainly honored and humbled to have the prospect of joining their company, if confirmed.

There is no part of the world that will be more consequential for our children’s future than the Asia-Pacific.  With one-third of the world’s population, one-third of global GDP, and some of the largest and most dynamic economies in the world, it is clear that the Asia-Pacific region will be key to America’s future well-being and prosperity.  We exported over $400 billion in goods to EAP countries in 2017,  which is up 160% from a decade ago.   This region is also home to five U.S. treaty allies with over 80,000 U.S. troops living, training, and operating alongside their partner host country forces to undertake a range of missions, including search and rescue, disaster relief, and counterterrorism.  It is crucial for U.S. interests that this area remains stable and prosperous.

But there are very real security and economic challenges in the Asia-Pacific region, including the menacing threat of North Korea, the rise of an authoritarian China, and the spread of terrorism and extremism.  Although the region has enjoyed peace and growing prosperity for years, the threat from North Korea continues to increase, tensions and extremism are on the rise, and the export-led model that underpinned East Asia’s stunning growth is no longer viable. We must insist on fair and reciprocal market access, if we are to sustain the global trading system.   Backsliding on democracy, governance and corruption, and human rights is also undermining prospects for stability and growth in some countries.

Dealing effectively with these challenges in this crucial part of the world requires the strength and resolve of U.S. diplomatic leadership, and this administration’s approach to the Asia-Pacific puts our strong and active leadership at the forefront of international efforts to meet these challenges.

On North Korea, the Trump administration has mobilized the entire international community, through our campaign of global maximum pressure, to come together to face down Kim Jong Un’s attempts to develop his nuclear and ballistic missile capabilities.  The UN Security Council unanimously passed four sanctions resolutions last year, and additional worldwide efforts to further isolate North Korea diplomatically and economically make clear that we will not accept a nuclear North Korea.  Our preference is to achieve denuclearization of the Korean Peninsula through a diplomatic settlement, but we will reach this goal one way or another.

With regards to China, as this administration has made clear, the United States wants a productive relationship with China, and we must work to manage and resolve differences.  We have been equally clear, however, that we will not abide Chinese attempts to displace the United States in Asia, to coerce countries in the region and that we will not be taken advantage of.  If the international system that has enabled China’s rise is to continue, then rules and standards must be observed and countries must not be bullied or threatened, but treated as equal players.

The administration, under President Trump’s leadership, is working to expand and deepen partnerships throughout the region via our Indo-Pacific strategy, to ensure that countries have support to make their own decisions and don’t feel pressured to take on obligations that undermine good governance or long-term growth.  We also continue to prioritize work in APEC to promote high-standards and fair trade and to support ASEAN-centered regional architecture, which underpins East Asian peace and security.  The United States is a Pacific power and will remain committed to this region’s success.

In short, I am humbled to be considered for this important position and, if confirmed, I look forward to working with you to further the prospects of the United States in this part of the world.  Thank you very much.