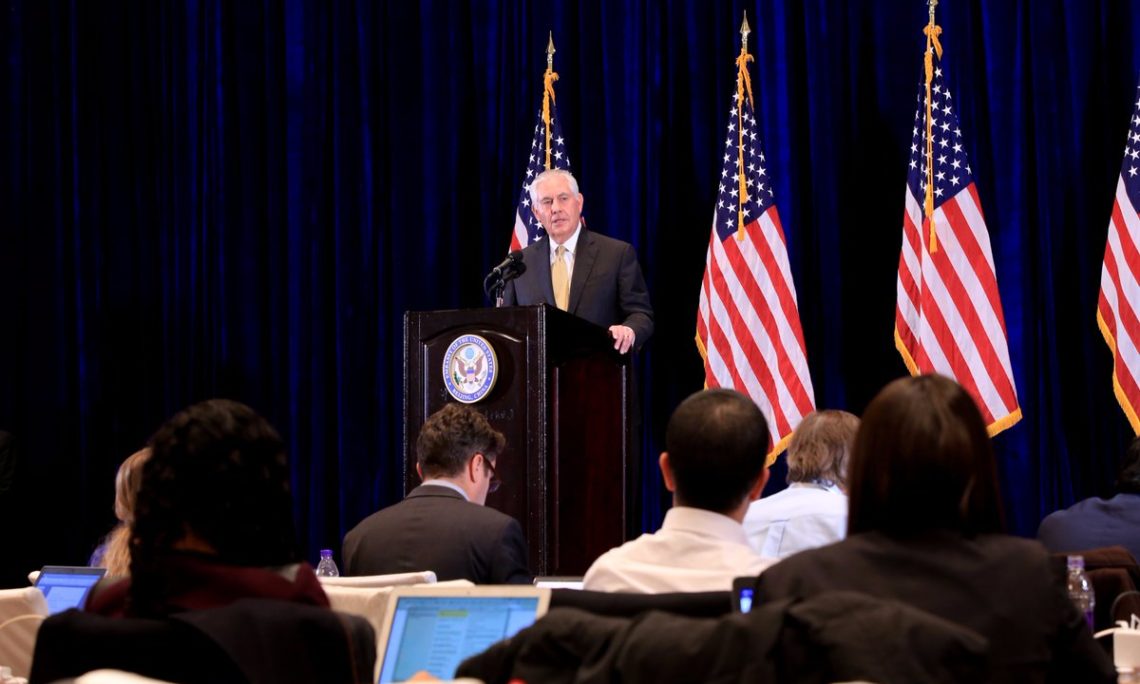 THE WHITE HOUSE
Office of the Press Secretary
November 9, 2017

It is a pleasure to be back in Beijing.  As you know, this is the third stop of the President’s lengthy trip.  So we’re kind of at the halfway mark — great meetings in Japan, South Korea — good capstone to it all here in Beijing.  And then of course we’ll head on for the rest of the trip.

I know President Trump has been very gratified, and you’ve heard him express that himself with the warm welcome he’s received here in China.  He and President Xi continue to build a personal relationship that’s defined by deep respect for each other, a frank, open, and productive exchange.

Also, I want to thank Ambassador Terry Branstad for the outstanding job he’s doing.  The Ambassador and his team have been working hard to ensure a successful visit for our President.  And I also want to reiterate my appreciation for all the hard work our folks at the embassy here in Beijing do implementing our policy here on the ground.

Our two Presidents have had a candid and constructive set of conversations about issues of shared interest and concern.  They agreed that we need to work together to expand areas of cooperation and generate positive outcomes for the benefit of both of our citizens.  Our President has affirmed that by directly and frankly addressing these issues where we have differences, we can find ways to solve problems.

We’re grateful for China’s cooperation.  President Trump has made clear the need to not just maintain the current peaceful pressure efforts, but to do even more.

On critical issue of opioids, we’ve made some good progress on actions to curb the flow the harmful narcotics into the United States in order to save American lives.  The President committed to take new actions, including agreements to control the export of new fentanyl precursors, sharing intelligence on drug trafficking, and exchanging trafficking information packages to identify individuals and criminal networks responsible for trafficking.

This is my third trip to China, as many of you know, since I became Secretary of State.  And I know that Defense Secretary Mattis is planning to come early in 2018.  This underscores the importance we place on the diplomatic and security relationship that he and I have developed jointly.  In addition to engaging on today’s most pressing issues, we’re also discussing ways to prevent mishaps, misunderstandings, and miscalculations.

We’ve also discussed our respective positions on cyberspace, outer space, and nonproliferation.  We plan on continuing our engagement in these and other areas over the coming year.

As you know, we’ll next be going to Vietnam for the APEC Summit and then on to Manila for ASEAN and the East Asia Summit.  We had a frank exchange here, in China, on maritime security issues and the South China Sea.  The U.S. position remains unchanged:  We insist on upholding freedom of navigation that claims to be consistent with international law, and that claimants should stop construction and militarization of outposts in order to maximize prospects for successful diplomacy.

The President also committed to promote exchanges and understanding between our peoples, and had a frank exchange of views on human rights issues.

On behalf of the United States, I repeat our gratitude to China for hosting President Trump and our entire U.S. government delegation.

And I’m happy to take questions, and I think Sarah is going to referee for me because she’s better at that than I am.

Q    Mr. Secretary, on North Korea, the President was asking Xi Jinping to do more — to close down bank accounts, send North Korean workers back, cut out the oil supplies.  Where did you get on that front?  And will the President meet with Vladimir Putin in Da Nang?

SECRETARY TILLERSON:  The President and President Xi did have a very, very detailed exchange on what both sides are doing, and in particular what China is doing with respect to first fully implementing all the provisions and the intent of the U.N. Security Council resolutions that are imposing sanctions.

President Xi shared very specific actions they’ve taken, including the bank accounts that you just mentioned and other areas to comply fully.  We talked about foreign labor, as well.  And a lot of businesses up along the China-North Korean border are shutting down as a result of the sanctions.

President Xi took the views that the sanctions are going to take a little while, that he didn’t expect immediate results, but that, clearly, from his perspective, the North Korean regime is feeling the full effects of the sanctions themselves.  In terms of how much stress it will create on them, time will tell.