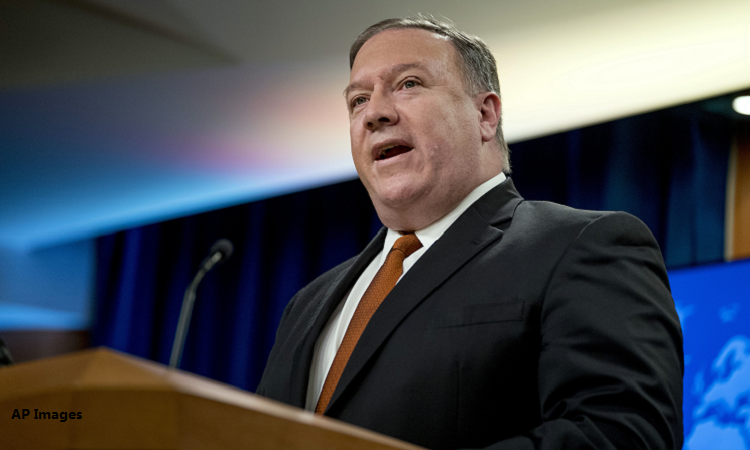 SECRETARY POMPEO: On Wednesday, President Trump signed an executive order that made clear that our administration will not tolerate foreign interference in our democratic processes. Elections are the foundation of our democracy, and preserving their integrity is a matter of protecting sovereignty and American national security… As this executive order makes clear, if Russia or any other foreign government or persons acting on their behalf interfere in the United States election, there will be swift and severe consequences. The order provides for mandatory sanctions against foreign persons determined to have participated in interference in our elections. It also provides for additional measures that could be capable of devastating or interfering in our country’s economy. And if the government of that country authorized, directed, or sponsored, or supported election interference, we’re going to come after them.

The State Department will continue to work closely with other agencies to identify, expose – and expose foreign interference directed against American elections, no matter which entity initiated it. We’ll also continue to work with our partners around the world to stand against these threats to democracy wherever – and however – they rear their head.

Yesterday was a great day. It was a proud day. After Senate confirmation, President Trump conferred on four of our officers the position of Career Ambassador. Four of the State Department’s finest: Philip Goldberg, David Hale, my Under Secretary for Political Affairs Michele Sison, and Dan Smith.

This is the highest and most prestigious rank at the Foreign Service. They should all be very proud. I know I’m proud of them. The American people too should be proud of Phil, David, Michele, and Dan representing our country. They have all proven over many years of service that their outstanding diplomatic skills and leadership qualities are much needed and that they are delivering. They’re an inspiration, too. They’re great leaders. I congratulate them all on behalf of the all of my State Department colleagues.

Russia has actively attempted to undermine the UN Security Council resolutions, the work of the 1718 Committee, the committee at the UN that evaluates compliance with sanctions, by attempting to change the language there. I hope that the 1718 Committee will do what it has historically done – remain independent and report on the facts as they know it and not allow a single country, in this case Russia, to draft language and have it inserted. I hope they will publish the original document that they intended to publish, which shows – it shows clear activities related to sanctions and sanctions violations. It’s important; it’s the date set that underlays not American sanctions but the world’s sanctions from the UN Security Council.

Your question was broader than just that. The United States is as committed as ever to continuing to enforce those UN Security Council resolutions. We believe they are central to President Trump’s efforts to convince Chairman Kim that full, final denuclearization of the Korean Peninsula is necessary and that it needs to be done in a way that the world can see that there’s been this strategic change in Chairman Kim’s core understanding of how he will provide a better future for the North Korean people. He said it at the summit in Singapore and we are still continuing to have many conversations with the DPRK about how to effectuate achieving all the commitments that were made during the Singapore summit.