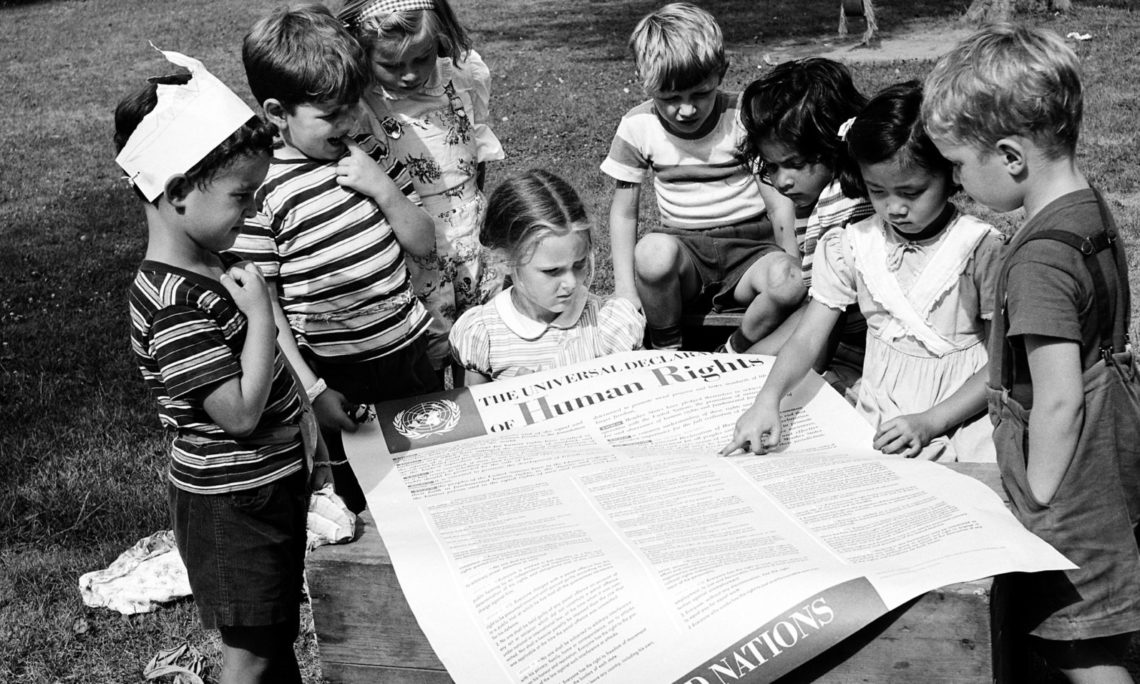 United Nations Photo Following It's Human Rights Day for Them, Too These children of United Nations staff members are getting a closer look at the Universal Declaration of Human Rights, which is two years old on 10 December. All nations in the world have been invited to set aside 10 December of eve

In 1948, the United Nations General Assembly adopted the Universal Declaration of Human Rights (UDHR) to identify common rights and freedoms for all people in all nations.  An American, former first lady Eleanor Roosevelt, chaired the UN Human Rights Commission that drafted this landmark document.  Chairwoman Roosevelt needed only to look at our own deep American traditions as inspiration for naming these inalienable, individual rights.  The Declaration of Independence, U.S. Constitution, and Bill of Rights have guided our nation for more than 200 years in promoting rights and freedoms.

Thanks to Chairwoman Roosevelt and the UDHR, more persons around the world enjoy these rights and freedoms than was the case before the Declaration’s adoption.  Indeed, it is widely recognized that a government’s moral authority is derived in large measure by its willingness to protect the rights and freedoms enumerated in the UDHR.  Sadly, not all nations have demonstrated this willingness.  The Chinese government continues to repress members of religious and ethnic minority groups in Xinjiang, Tibet, and elsewhere, as well as to undermine the freedoms guaranteed to Hong Kongers under the Sino-British Joint Declaration and the Basic Law.  The regimes in Iran, Syria, and Venezuela commit gross human rights violations every day that shock the conscience.  In order for countries such as China, Iran, Syria, and Venezuela to regain moral authority in the eyes of freedom-loving nations, they must rededicate themselves to protecting human rights and fundamental freedoms.

Today, we celebrate the universal rights outlined in the UDHR, and recommit ourselves to protecting and promoting these fundamental, universal, and essential freedoms.  The United States will always remain a staunch supporter of those who strive for their unalienable rights and human dignity.