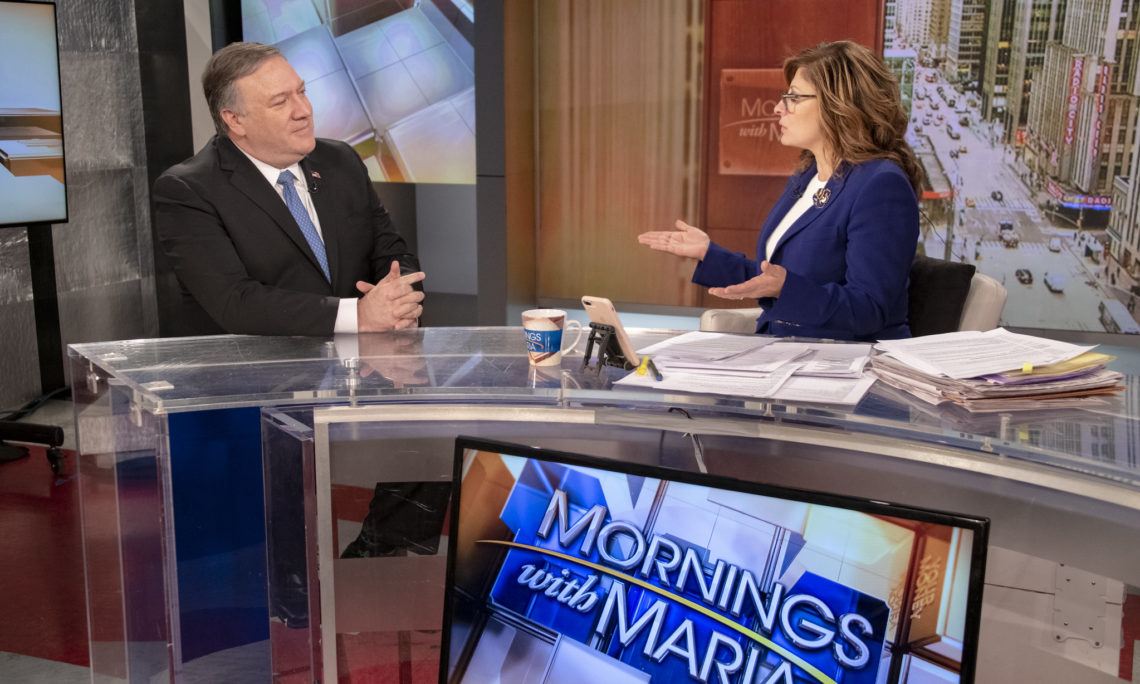 QUESTION:  Thank you so much for joining us.  The IP theft issue is something we’ve spoken about before.  How do you change something that’s really engrained in a country’s culture?  Do you think the U.S. is going to be able to come up with some kind of an enforcement mechanism to put in place so that the Chinese keep their promises of not stealing from the West?

SECRETARY POMPEO:  Yeah, Maria, this is a challenge.  It’s why the negotiations have taken as long as they have, and why we’re not complete yet.  President Trump has, for the first time, called out China for this theft of intellectual property, hundreds of billions of U.S. dollars stolen by the Chinese over the past decades.  President Trump is addressing it.  The work that’s being done is about this enforcement mechanism.  What is it you do if they don’t live up to the word?  We’ve seen the Chinese enter into deals before where they didn’t follow through.  And the mission that Secretary Mnuchin, Ambassador Lighthizer have is to get this deal done in a way that, after the deal is done, after the signing ceremony, American companies can count on the fact they can do business in China without substantial risk their IP will be stolen, and if it is, they will have a tool to recover for that loss.

SECRETARY POMPEO:  Maria, there’s a long history of China not abiding by its constitution, which says people can practice their faith, in China’s own constitution.  And yet today, they’ve rounded up close to a million Muslims, Uighurs, in one part of their country, treating them horribly.  They say they’re reeducation camps, but they, frankly, won’t let people in to see what’s truly going on there – very limited access to this.  I met with four Uighurs last week in my office.  One of them —

QUESTION:  These are survivors of these camps or whatever they call them.

SECRETARY POMPEO:  These are – some of them were survivors, some of them have family members in those camps.  One of them, after our meeting, had his aunt and uncle rounded up and taken to a camp in China.  This is the kind of thing that they do to impact his behavior, his – he’s here in America – to impact his behavior here in America.  It’s unacceptable.  They need to let this aunt and uncle – his mother is in a camp as well.  She needs to get her U.S. passport back.  This kind of behavior, these human rights abuses, are tragic, they’re historic, and President Trump is taking on each of these challenges.

SECRETARY POMPEO:  So the trade deal has its own conversation, its own dialogue that’s taking place, but it’s against the background of all of these other broader issues: issues with China’s use of technology in ways that will fundamentally put Americans at risk, this technology from Huawei that is now being put in place all across the world.  It’s a company that’s very close to the Chinese Government and will do what the Chinese Government asks it to do.  And so we have sounded the alarm urging nations, security apparatuses from around the world, not to put this technology.  And the challenges with China are manifold, and we’re approaching each of them, sometimes in separate silos, but often as part of a broader conversation with China, asking them to engage in trade and conduct and human rights, and human rights activities that are consistent with the values that Americans hold dear.

QUESTION:  The President made a big deal of the fentanyl agreement with the Chinese, that they are going to promise that they’re going to classify all classes of fentanyl.  Let’s watch this closely and tell me what your thoughts are here, because I guess there was one issue that the Chinese say that fentanyl is used in a lot of things, including fertilizer.  How do you make sure that fentanyl is not coming over the border, because isn’t this the synthetic precursor for opioids?

SECRETARY POMPEO:  It is.  This is a very important issue.  The commitment that President Xi made to Trump was a very important commitment.  Now China needs to follow through on it.  We’ve seen some progress, some administrative progress inside of China.  We hope they’ll deliver on this.  The President’s down at the border today.  One of the elements of the crisis that’s down there – we see it in the human suffering that takes place along the border that President Trump is so focused on – but he’s also focused on narcotics, drugs that are coming across the country.  This fentanyl that comes from China often is trafficked through Mexico across that very border.  It’s one more reason we have to get control of the crisis that’s at our border today.