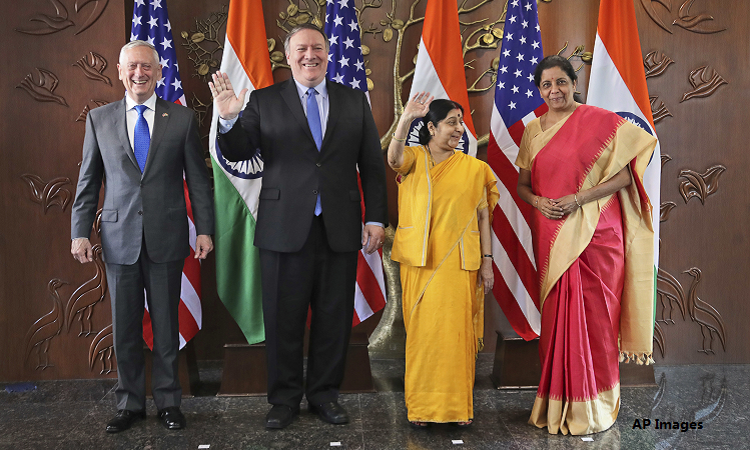 This is my first trip to India as Secretary of State, and it is an honor to travel here for such an important and successful event. Later today, Secretary Mattis and I will meet with Prime Minister Modi. We look forward to discussing how best to advance the U.S.-India relationship, one that is in a new era of growth under his leadership and that of President Trump.

Today’s 2+2 meeting is symbolic of our increasingly close partnership. We had many productive and forward-thinking conversations on our bilateral relationship, our shared future, and how we can cooperate in promoting a free and open Indo-Pacific.

As the two largest democracies in the world, the United States and India are deeply bound by our shared values. We have a responsibility to advance a free and open Indo-Pacific that reflects those values: the rule of law; national sovereignty; good governance; the protection of fundamental freedoms, rights, and liberties; free, fair, and reciprocal trade relationships; and peaceful resolutions of territorial and maritime disputes.

On economic matters, President Trump recognizes the long-term strategic importance of India’s economy playing a productive role in the world’s most dynamic and fastest-growing region. He is intent on ensuring the United States, India, and all countries can responsibly reap the benefits of an Indo-Pacific that is open, free with fair trade and investment.

As just one example of President Trump’s commitment, Secretary of Commerce recently announced Strategic Trade Authorization Tier-1 status for India just a few weeks ago. This will further facilitate high-technology exports from the United States to India. The United States will continue to practice partnership economics with India and all the other countries in the region. We seek to unlock the unparalleled potential of our private sectors to meet the region’s developmental, energy and infrastructure needs, and to create an environment in which businesses and countries can thrive when they play by the rules.

Since India gained its independence in 1947, our nations have shared a fundamental respect and love of freedom. Just three years after India’s independence, Prime Minister Nehru visited the United States – in his words, and I quote – “On a voyage of discovery of the mind and heart of America.” Today, Secretary Pompeo and I bring the same spirit that Prime Minister Nehru carried to Washington almost 70 years ago, promoting the cooperation which both our countries earnestly desire. Today’s successful and highly productive meeting, the first ever 2+2 between our nations at the ministerial level, has further bolstered our strong defense relationship, as you just heard. We reiterated our highest respect for each other’s sovereignty and committed to work together for a safe, secure, prosperous and free Indo-Pacific, one that is underpinned by the rule of law.

We appreciate India’s role as a stabilizing force on the region’s geographic front lines. Your nation understands better than many peace and prosperity are only attainable when all respect the principles of territorial integrity, freedom of navigation, freedom from coercion. All of these are fundamental to the rules-based order. Only then, to borrow Prime Minister Modi’s words, can nations small and large prosper free and fearless in their choices. We will continue working together to enhance and expand India’s role as a primary major defense partner, to elevate our relationship to a level commensurate with our closest allies and partners. Today we took, as you know, a significant step towards that goal by signing the Communications Compatibility and Security Agreement. The landmark agreement deepens our military-to-military cooperation and our ability to share the most advanced defense technology, making us both stronger.