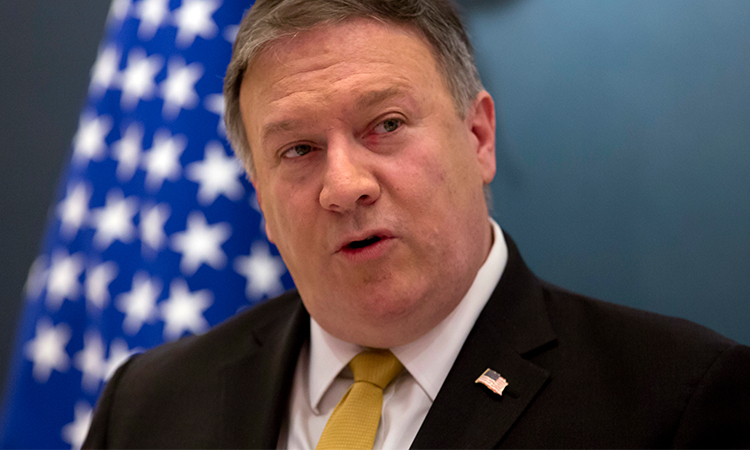 QUESTION: Secretary Pompeo, thank you for joining us on your very first trip as Secretary of State.

SECRETARY POMPEO: Thank you, Jonathan. It’s great to be with you.

QUESTION: So I want to start with those incredible images that we saw of Kim Jong-un stepping into South Korea – the first time we have ever seen a North Korean dictator do that, how big, how significant, was that moment?

SECRETARY POMPEO: Yeah, Jonathan, I think it’s a big deal. It’s important. Every step along the way matters. The objective remains the same: complete, verifiable, irreversible denuclearization. That’s been the administration’s goal. President Trump has put economic pressure on the North Koreans, and it appears to have given us this opening, this real opportunity for something that would be transformative for the world if we can achieve it.

QUESTION: And let’s look at those – more remarkable images of your meeting with Kim Jong-un, the two of you just standing there side-by-side. What was going through your mind at that moment?

SECRETARY POMPEO: Well, I was on a mission, Jonathan. I had a mission to begin to lay the groundwork for President Trump’s meeting with Kim Jong-un. We wanted to make sure we understood that the North Koreans, Kim Jong-un, was prepared to talk about the things that matter most to give us a grounds, a basis, to have that meeting between the President and the chairman. I was very focused on that in that moment.

QUESTION: The President said that the meeting, the meeting between the two of you, was entirely unplanned and it lasted for more than an hour. How did it come about?

SECRETARY POMPEO: Well, I was there on a mission. I was aiming to achieve the goals the President set forward to me. It became clear that I was going to get the chance to meet with Kim Jong-un to discuss some of the details, but most importantly, to take a read on whether there was an opportunity here for our two countries to achieve this. And when I came back, I reported in to the President the discussion. It was a productive one. There remains a great deal of work to do, but we at least have an opportunity here to do something that’s incredibly important.

QUESTION: As the CIA director, you obviously spent a lot of time and the CIA has spent years, resources on trying to read the North Korean leadership, trying to understand Kim Jong-un. What did you come away learning about him in that meeting?

SECRETARY POMPEO: Well, any time you get a chance to meet face to face with someone you get a better read about what they’re thinking, whether they’re really prepared to do something that is historic and different. And we’ve got a long history in negotiating with North Korea. Repeatedly, they have taken actions, only to find that those promises proved false or unworthy, or they were uncapable of achieving them. My goal was to try and identify if there was a real opportunity there. I believe there is. Who knows how the ultimate discussions will go. There is a lot of work left to do, but I’m very hopeful that the conditions that have been set by President Trump give us this chance.

SECRETARY POMPEO: We had a good conversation. We talked about serious matters. He was very well prepared; I hope I matched that. We had a extensive conversation on the hardest issues that face our two countries. I had a clear mission statement from President Trump. When I left there, Kim Jong-un understood the mission exactly as I’ve described it today, and he agreed that he was prepared to talk about that and to lay out a map that would help us achieve that objective. Only time will tell if we can get that done.

QUESTION: So you went there to set up this summit meeting between Kim Jong-un and the President or to take steps towards doing that. What do you – looking at this, what is your assessment? What is the best plausible outcome that can – that we can see after this first meeting of Donald Trump and Kim Jong-un?

SECRETARY POMPEO: Well, we hope a number of things could be achieved. I talked about getting the release of the American detainees, and then we talked a great deal about what it might look like, what this complete, verifiable, irreversible mechanism might look like. And so when the two leaders – the only people who can make those decisions – will be in a room together, they can set the course; they can chart the outcome; they can then direct the teams to go deliver that outcome. And the best outcome would be that, that the two agree that they’re going to get there and charter their teams to go make that happen.

QUESTION: So I want to play for you something that the National Security Advisor John Bolton said shortly before he came into the administration but right after this planned meeting was announced. This is what he said about negotiating with the North Koreans: “There’s an all-purpose joke here. Question: How do you know that the North Korean regime is lying? Answer: Their lips are moving.”

So that was obviously before John Bolton became national security advisor. He’s now working on this meeting. But given all of the broken promises on the nuclear issue that we have seen under President Clinton, President Bush, President Obama, three different North Korean leaders now, can you really trust anything that comes out of – out of a meeting with Kim Jong-un?

SECRETARY POMPEO: Jonathan, this administration has its eyes wide open. We know the history; we know the risks. We’re going to be very different. We’re going to negotiate in a different way than has been done before. We’re going to require those steps. We use the word “irreversible” with great intention. We’re going to require those steps that demonstrate that denuclearization is going to be achieved. We’re not going to take promises. We’re not going to take words. We’re going to look for actions and deeds. And until such time, the President has made incredibly clear we will keep the pressure campaign in place until we achieve that. That’s different. And so in each case, both countries will have to do more than words. We’ll have to actually deliver an outcome that is the one that Kim Jong-un and I had the chance to talk about at the direction of the President.

SECRETARY POMPEO: I’m not one to do much about navel gazing or eye staring. I’m looking for actions. And that’s what President Trump is asking for too. We have built a coalition. A diplomatic coalition has come together to put pressure on Kim Jong-un. President Trump and that pressure campaign are the reasons Kim Jong-un wants this meeting. It’s the objective of our administration to achieve the outcome. That’s what we’ll be looking for between the President and Kim Jong-un.

QUESTION: Do you think he’s really had a change of heart on this? I mean, if you look at Kim Jong-un, this is somebody who assassinated his uncle right after coming into power, poisoned his half-brother, did more to advance North Korea’s nuclear facilities, its missile capabilities, than his father, did more to advance the military than his grandfather. Do you really think that he has had a change of heart on this and he is ready to give up the pride of that country right now, its nuclear program?

SECRETARY POMPEO: Kim Jong-un is going to have to make a decision. He is going to have to make a big decision. Does he want the pressure campaign to continue? Does he want President Trump to continue to place him in the location that he finds himself today? Or is he looking for something big and bold and different, something that hasn’t happened before?

I don’t know which way it will go. As the President has said, only time will tell. But we have a mission set. We have an obligation to engage in diplomatic discourse to try and find a peaceful solution so that Americans aren’t held at risk by Kim Jong-un and his nuclear arsenal. That’s the mission. That’s the goal. Only time will tell if we’re going to be able to achieve it.

QUESTION: Is he going to get anything in return before he does that, or is there any lifting, any easing of sanctions, any reward given, before the total, irreversible dismantling of that nuclear program?

SECRETARY POMPEO: Jonathan, the administration has been very clear. We’ll see how the negotiations proceed, but we’re going to do it in a fundamentally different way than the previous efforts to persuade the North Koreans to get rid of their nuclear weapons program. We have our eyes wide open, Jonathan.

QUESTION: But nothing before it’s done? No partial steps?

SECRETARY POMPEO: Jonathan, we have our eyes wide open.

QUESTION: You were CIA director for 15 months. You had a sense, you’ve got – you’ve seen all the intelligence on this. We’ve seen the assessments. Are you confident that we truly know the extent of the North Korean nuclear program? Do we know where his bombs are? Do we know where all his nuclear facilities are at this point?

SECRETARY POMPEO: Jonathan, I’m not going to go into any detail on that.

QUESTION: Well, I’m just asking if you’re confident in the assessment. I’m not asking you what the assessment is. Do you believe – because he’s – he’s hidden nuclear capability in the past —

QUESTION: I want to play something you said in July at the Aspen Forum —

QUESTION: Can I – can I just ask you one more question before we head out here?

QUESTION: I want to play something you said at the Aspen Forum in July: “The North Korean people, I am sure, are lovely people and would love to see him go as well. As you might know, they don’t live a very good life there.” So that was in July. That now – since then, you have been to North Korea, you have met directly with Kim Jong-un. Do you still think that the people there in North Korea would like to see him go?

SECRETARY POMPEO: Jonathan, what I said that evening I still believe. The people of North Korea live in very difficult conditions. I believe that one of the reasons that Kim Jong-un is engaged in this conversation is that the pressure campaign that has been applied by President Trump and, indeed, by the world has put them in an even more tenuous, more difficult position. And so I am optimistic. We will work hard to see if we can’t find a solution so that the North Korean people can, in fact, live a better life.

QUESTION: Our thanks to Secretary Pompeo, who spoke to us from Saudi Arabia.