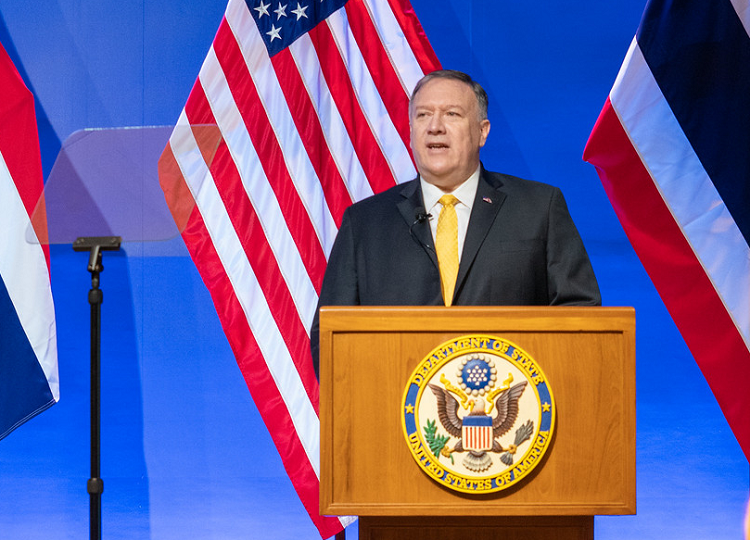 SECRETARY POMPEO:  Good morning, everyone.  Peter, thank you for the kind introduction.  I also want to thank the Siam Society and your president for hosting me.  I know too we have many prominent businesspeople here in the room with us today.

I want to recognize Greg Bastion, the president of AmCham Thailand.  He’s a West Point grad, so that’s always good.

I especially want to thank the incoming Thai ambassador to the United States as well for joining us here today.  Thank you for being here, sir.

And there’s no bigger VIP than my wife, Susan, who’s sitting in the front row as well.  (Laughter.)  All right, I hit my mark on that one, it’s all good.  (Laughter.)

This is my first visit to Bangkok as the Secretary of State.  I’ve been here before.  I’ve been in the region many, many times.  It’s special to be here in this place at this time.  The United States has a long, cherished relationship, as the charge said, of 200 years.  And I know we will remain great and good friends for the next two centuries as well.

This place that we’re standing today has a motto.  Siam Society’s motto is, quote, “Knowledge gives rise to friendship.”  In that spirit, I’d like to share with you today my perspective on our economic engagement in the region.  I don’t know that any element of our relationship could be more important.  It is a history that has been forgotten at times, and worse, distorted by those who don’t have our mutual best interests at heart.

It’s a story of partnerships which were once unimaginable, but are now absolutely indispensible to all of us.

It’s the story of a country that really seeks win-win propositions.

It’s a story of American principles and Asian prosperity.

Let me tell you about the Anurak family from right here in Thailand.  Not so long ago, Mr. Anurak was a foreman at a construction company and his wife was a nurse.  A nice middle class life, yes.  But they wanted something more.  They wanted something more for their children, as all families do.  They started a small chicken farm.

In 2006, the American company Cargill, which was invested in Thailand beginning in 1968, discovered them.

They worked with the family to improve productivity, to improve efficiency, to help them with management techniques.

That partnership with America worked out pretty darn well.  Today, that one farm has become five, and they earn an average of $78,000 each and every month.

And when they’re ready to grow further, they know they have a solid partner in that great American business.

This astounding prosperity is a far cry from the devastation and uncertainty that engulfed Asia after World War II, which really wasn’t that long ago.

India won its independence from the British Empire, and then Pakistan and Bangladesh went their separate ways.  Singapore and Malaysia parted paths.  Taiwan and Mainland China diverged.  Communist ideology was on the march on the Korean Peninsula, and in Vietnam and in Indonesia as well.

But look how times have changed:

Seoul is home to world-class companies like Samsung and LG.

Singapore serves as the regional headquarters to Facebook, Microsoft, Pfizer, and a lot of lawyers.

Hanoi hums with motorbikes and cars zipping around.

Bangalore provides IT solutions to the entire world.

Taipei’s skyline – its skyline is dominated by Taipei 101, one of the world’s tallest buildings.

And even Beijing and Shanghai have become economic engines.

And of course, the right question for the future is to ask:  How did this all happen?

It wasn’t an economic miracle, and in fact, it wasn’t preordained.

This prosperity happened because of two very earthly factors: trade and freedom.

Now, I’m an Army guy, and I don’t like to give the Navy credit for much of anything, but the truth is – the truth is the key shipping lanes of the Indo-Pacific were and are today protected by American sailors.  And where colonial powers once demanded submission, America offered security.

Economically, it’s true.  It’s true that governments created some national championship companies, but that’s only part of the story.  State-led growth only gets you so far.

Because in the end, human flourishing only really blossoms when governments step back.  The Indo-Pacific region only really took off when nations adopted the formula that I talked about at the Global Entrepreneurship Summit in Amsterdam this past summer.  It’s really very simple: property rights, the rule of law, lower taxes, an overall lighter touch from government regulation.

That’s when the Asian tigers roared and cubs stood on their own.

And the United States was there.  It was there with you all the way and it will be, helping you grow and forging ever-closer ties.  We built APEC, we built ASEAN, and the Lower Mekong Initiative, and we did so with you, alongside of you.

Importantly too, we invested in your human capital.  Our educational programs and universities have nurtured thousands of Asian leaders for decades, from local leaders to heads of state.

And some of our most important ambassadors – private businesses – grew alongside you to our mutual benefit.  I told you the story about Cargill.  Look at how Chevron has spurred prosperity here, or Texas Instruments in the Philippines.

Today, more than 4,200 American companies operate within ASEAN, employing, training, investing in millions of people all across the region.  U.S. companies have over a trillion dollars invested in the region.  There is no other country anywhere that even comes close.

They say, at least in America, that money doesn’t grow on trees.  Perhaps it does elsewhere.  But I will tell you this:  Money does take root in this region when governments work hard to set the conditions for it to do so.  And leaders from government and businesses will talk about how to grow prosperity further today in the meetings we’ll have and then at the Indo-Pacific Business Forum this November, held right here in Bangkok.

We should be proud of this.  This is a great story, and it’s one the Thai people have lived firsthand.

The poverty rate here has declined from 67 percent back in 1986 to 7.8 percent in 2017.  That’s remarkable.  Thailand now has the 20th largest economy in the world.  Think about that.

We want to see this kind of growth across all of Southeast Asia, for countries big and small.  And we know – we know because we’ve seen that regional prosperity goes hand-in-hand with innovation, with good governance, and with the rule of law.

And so the Trump administration is invested in the sovereignty, in the resilience, and prosperity of every Southeast Asian nation.  And not only that, not only that, we want to strengthen and expand our relationship here.

And don’t believe anyone who tries to tell you otherwise.  Nearly two years ago, President Trump recommitted the United States to economic ties, and the formula for success has been borne out by history.  It’s the one that I just described.  We know in the end that liberty is the true source of rejuvenation.  We want a free and open Indo-Pacific that’s marked by the core tenants of the rule of law, of openness, of transparency, of good governance, of respect for sovereignty of each and every nation, true partnerships.

It’s why we supported the BUILD Act in our Congress, which has more than doubled America’s development finance capacity to $60 billion.

In the end, we believe in democracy, and we commend the – our Thai friends for returning to the democratic fold.

We also believe in human rights and freedom.  The current unrest in Hong Kong clearly shows that the will and the voice of the governed will always be heard.

And we want free and fair trade, not trade that undermines competition.

We want the trillions of dollars in uninvested private capital all around the world to be put to work in this region.  We’ve seen this.  Private investors have exponentially more money than any one government could ever bestow on any other country to build bridges, or ports, or electricity grids.

No, we are building roads to pave our national sovereignty.  We don’t fund bridges to close gaps of loyalty.

Our companies are incentivized to do high-quality work that benefits consumers and citizens.

Ask yourself this, ask yourself:  Who really puts the people’s interests first, a trading power that respects your sovereignty, or one that scoffs at it?

Ask yourself this:  Who really fosters innovation and reform, private sector companies, or state-owned enterprises?

Ask yourself this:  Who really encourages self-sufficiency and not dependence, investors who are working to meet your consumers’ needs, or those who entrap you in debt?

The United States today has the strongest economy in the world, and our consumers are driving demand for your products.  In contrast, China’s economy is entering a new normal – a new normal of ever-slower growth.

China’s problems are homegrown, but President Trump’s confrontation of China’s unfair trade practices has helped shine a light on them.  We’d like our trade matters resolved as quickly as possible.  All we want, all President Trump has ever asked for, is for China to compete on a level playing field with everyone, not just with the United States.  This will benefit not only us, but you, and the global trading system as well.

The time is right to do more together, using the model that has stood the test of time, using the formula that’s made America a force for good in this region – permanently.

One analysis of UN data estimates and predicts that for the first time since the 19th century, Asian economies in 2020 will be larger than the rest of the world combined.  Indeed, the Asian middle class has exploded.  Asia has truly come of age.  Now we must protect those gains.

Let’s stand up for the sovereign rights of nations and peoples.

As I close today, I’m looking forward to taking questions and talking about issues that are on your mind.  As I close, I can’t help but think of how fitting it is to put forth these ideas right here in Bangkok, Thailand.  Thailand is our oldest treaty partner in Asia.  You’ve proudly maintained your independence.

You’ve held to the path of sovereignty and national autonomy.

And America and Americans have proudly supported your rise for more than two centuries.

In 1835, a man named Dan Beach Bradley first came to the Kingdom of Siam as a missionary physician.

Dr. Bradley brought with him Western medical practices and served the royal court.  He gained the trust and friendship of the future king of Siam, after treating the prince’s serious illness.

He also brought the first Thai script printing press to Siam and founded the first newspaper, The Bangkok Recorder.

But most importantly, he brought knowledge that gave rise to friendship.

Dan’s legacy is bigger than that, because it didn’t stop there.

His daughter Sophia opened a small school in her home to offer equal educational opportunities to girls.  It grew, and to this day the Dara Academy is a well-respected private school right here in Thailand.

The anecdote points to this:  For centuries, America’s legacy has been of our partnership – and not just through our government.

And we build them to last.

President Trump and our administration will continue that commitment.

God bless you, and I look forward to taking some questions.

Thank you all for being here with me this morning.  (Applause.)