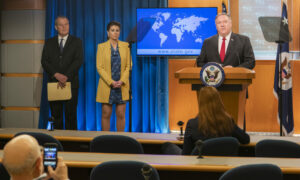 Now to the topic of greatest concern these days, the coronavirus.  I’d like to speak in some detail about the State Department’s 24/7, worldwide efforts to repatriate American citizens from around the globe.  It’s one of the most remarkable diplomatic missions in American history.  As of this morning, our team – working at great personal risk – has repatriated more than 45,000 citizens from across the world – 460-plus flights, 75 countries.

Nearly every day, incredible stories of our teams’ speed and tenacity getting our people home hit my desk.  These stories could be pulled from a Hollywood script, they’re remarkable.  I’ll share just a couple with you.

In Nepal, American tourists found themselves stranded near Mount Everest and other remote areas.  Our embassy obtained special permits from the government for 15-passenger commercial planes to fly in and out of that dangerous mountain terrain.  Embassy staff arranged buses to travel hundreds of miles to reach U.S. citizens and bring them back to Kathmandu to board flights that ultimately came back here to the United States.  We even helped one woman who was running low on medication reach a pharmacy, and evacuated her out of the first two flights that carried nearly 600 U.S. citizens and residents.

I want the American people to have a better sense of the staggering logistical coordination and detail that goes into every one of these repatriation operations.  They’re truly the good work of not only our team that works across time zones, but works with the Department of Homeland Security, the United States Military, and our foreign partners at every level to get transport authorities and airline companies and medical teams all to where they need to be to get these people home.

Our teams are printing emergency passports to get these folks back.  We call hotels to find spaces for U.S. citizens to sleep to make sure they’re near the airport for the moment that the plane will arrive, and we make arrangements for flight crews.  And we provide Americans with letters for safe passage.  The list goes on and on.  It’s truly a great piece of work by the United States Government on behalf of the American people.

I want everyone to be reminded that America remains the world’s leading light of humanitarian goodness as well amidst this global pandemic.

Right now, given the great need for PPE in our own country, our focus will be on keeping critical medical items in the United States until demand is met here.  But the United States continues, even as we speak, to provide high-quality, transparent, and meaningful assistance to our partners all across the globe.

We do this because we’re good and generous people.  We also do it because viruses don’t respect borders.  When we help our friends abroad, it keeps us safe back here in the homeland as well.

Today I can confirm that we are prepared to commit an additional $225 million in health, humanitarian, and economic assistance to further boost response efforts worldwide.  That’s on top of the roughly $274 million in funding we’ve already deployed to 64 countries across the globe.  No country can match this level of generosity.

The new funding that I announced today will be used to reduce transmission through virus diagnosis, prevention and control; to bolster health systems; to prepare labs; to train healthcare workers; to increase awareness; and much, much more.

Our efforts to help these other countries to keep us safer here have already had an impact.  We’ve translated PSAs on fighting the virus into almost 50 languages.  We helped Guatemala set up its main hospital for COVID patients.  We’re supporting online learning for kids in Cambodia whose schools are closed.

And on that theme, one more note.  Good news.  I’d like to draw your attention to the Ebola virus.

For almost two years now, the United States has led the global response to the latest outbreak of that horrible disease in the Democratic Republic of Congo.  Within one month from the outbreak, America deployed a Disaster Assistance Response Team and other experts who supported vaccination campaigns, diagnostic processes, testing and tracing, and more.  We’ve provided more than $569 million since the outbreak began to fight Ebola in the DRC and the neighboring countries.

Thanks to our efforts, I’m pleased to announce today that on April 12th the DRC is expected to declare this outbreak is officially over.  It will be 42 days – two full incubation periods for the disease –  since the last person tested negative twice and was released from an Ebola treatment center.  American assistance, the goodness of the American people, helped make this victory possible.  It’s an inspiration for our continued efforts to fight the COVID-19 pandemic.

QUESTION:  Sir, have you stopped using the phrase Wuhan virus to lower the temperature of the rhetoric with China, even as U.S. intelligence reports their disinformation is rising?

Your first question was about disinformation that we’re seeing.  We know that this is a global pandemic, and this is the time for every country to work together to resolve that.  To do that, you have to be honest and transparent.  Every country has that obligation.  We do our best to do that every day, to deliver the real data about the things we know, the things we learn.  We do it in formal public channels.  There’s a couple hours every day where the President and the team, the task force team, come out and talk to the American people about what’s going on with the best information that we have available.  We do that privately; we do that in our discussions.  I was on the phone all morning with counterparts from Kazakhstan and from Egypt to share with them the things we’re learning, the best practices we have.  HHS is doing the same thing.  CDC is doing the same thing.

But we have an expectation.  That expectation is that every country will do that the same way, and every nation, be they a democracy or not, has to share this information in a transparent, open, efficient way.  We – there are still lots of things we don’t know.  We can only know them when the data set – the global data set – is available to every party.  It has to be accurate, it has to be timely, it can’t be grudging.  We need to let scientists from all across the global community – nation immaterial, best scientist wins – stare at this data, work on this data, and collaborate together.  And you can’t do that if nations choose to behave in ways that are inconsistent with that central idea.

QUESTION:  How concerned are you about leaders using coronavirus to weaken democracies in their countries?  There is this specific example of Hungary, which the State Department has commented on.  Are you seeing that elsewhere, and what tools does the U.S. Government have at its disposal or would consider using to prevent that democratic backsliding?

SECRETARY POMPEO:  So, Rich, I – we talked about that particular situation.  We hope that doesn’t happen anywhere, and we’ll do the thing that – the normal toolkit that we have in diplomacy to respond where we see that taking place.  There will be bad actors try to use this outbreak of virus for nefarious ends.  We’ve seen that.  We’ve seen it in tactical ways, as well as you describe, when it’s political.

But there is a thought that’s there that I think is important.  I hear people saying that, boy, autocracies sure respond to crises well.  I have to tell you they got the wrong end of the stick.  It’s democracies that respond to crises well.  They protect liberty; they protect freedom.  What do autocracies do in the face of crisis?  They become more aggressive, they deny people their rights, they lie more – right – they do all – all the things that are the negative aspects of autocratic nations are exacerbated in times of crisis.  And while they may in some instance solve a particular problem in a particular way that facially resolves the crisis that’s in front of them, in the end they do enormous harm to the people of their own nation and put the rest of the world at risk as well.

What democracies do is what you see the United States doing.  I talked about it today.  They get their people home, they become very generous, they share their resources, they help the entire world fight the global pandemic.  You’ve seen the President and his task force talk about all the remarkable work we’re doing on therapeutics, all the remarkable work that the United States is doing towards delivering a vaccine.  And we’re working with our democratic partners around the world to help deliver that.

No, democracy is the answer in times of crisis, not moving in an autocratic direction.  It’s just the reverse of what I think you described having seen there.  I hope every leader around the world will see that when times are tough, what you really want is you want peoples of a nation to understand that their fundamental rights are going to be respected, that their liberty will be preserved, that those democratic values will be adhered to.  And when you do that, you get a free press, you get a free, active academia.  You get all the things that ultimately resolve these crises in a way that’s good for the nation that the leaders represent and good for the world as well.