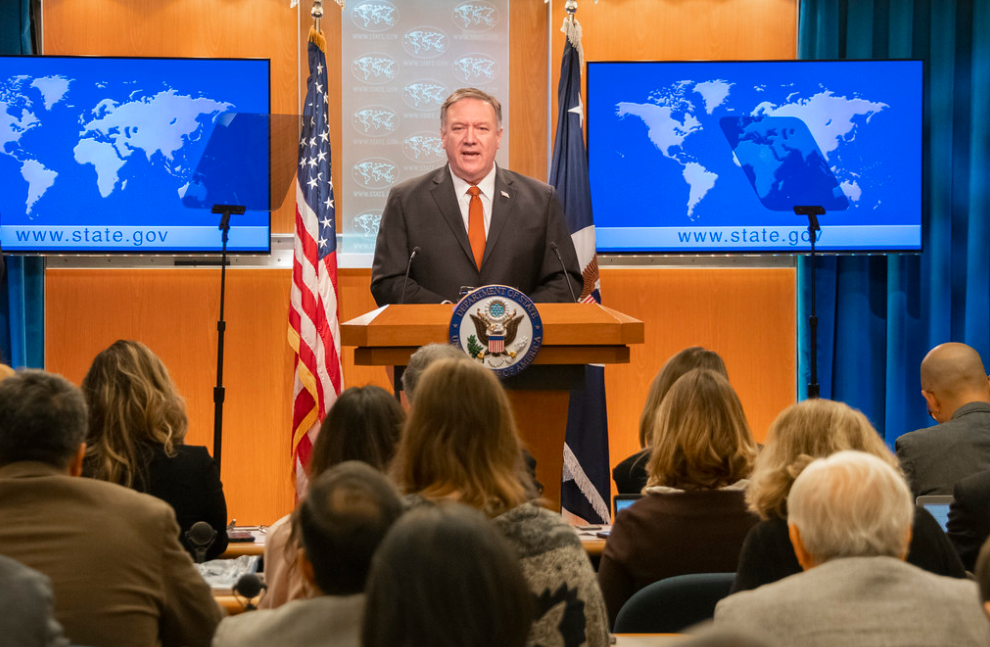 Turning to the Chinese Communist Party.  We’ve all seen the “Xinjiang Papers” released in recent days.  They detail the Chinese party’s brutal detention and systematic repression of Uighurs and members of other Muslim minority groups in Xinjiang.

These reports are consistent with an overwhelming and growing body of evidence that the Chinese Communist Party is committing human rights violations and abuses against individuals in mass detention.

We call on the Chinese Government to immediately release all those who are arbitrarily detained and to end its draconian policies that have terrorized its own citizens in Xinjiang.

It’s not just Muslims that are the largest – that are the target of the CCP’s hostility.  Christians, Tibetans, and other minority groups have also felt the CCP’s heavy hand of repression.

On a different note regarding China, we congratulate the people of Hong Kong on free, fair, and peaceful district council elections on the 24th of November.

The United State continues to support democratic values, fundamental freedoms in Hong Kong as guaranteed by the “one country, two systems” framework, and aspirations of the Hong Kong people.

As for Hong Kong, I think the administration has been pretty clear about our expectations about how Beijing will treat people throughout their country.  We have human rights standards that we apply all across the world, and Hong Kong is no different.  In addition, in Hong Kong we have the commitments that the Chinese Government made as part of their obligations to maintain one country and two systems.  That’s what we’re continuing to work towards.

Congress has now taken action.  Since it’s before the President, I won’t get out in front of what he will do before too long.  But suffice to say, I think the administration’s policies have been pretty unambiguous, and our support for the Chinese Communist Party’s continued commitment to the promises that they made remains unwavering.  And I think you saw that from the people of Hong Kong this past week.  That’s what they’re asking for, too, the continued maintenance of the understandings that were committed to under international law.

I think it’s the case now that you’ll see many more countries around the world acknowledging what’s taking place there and working alongside of the United States to create space and improve human rights conditions for the people of Xinjiang.  I’m hopeful that those papers – the release of those papers will encourage others to join in what we view as a very important outcome that we’re trying to achieve.