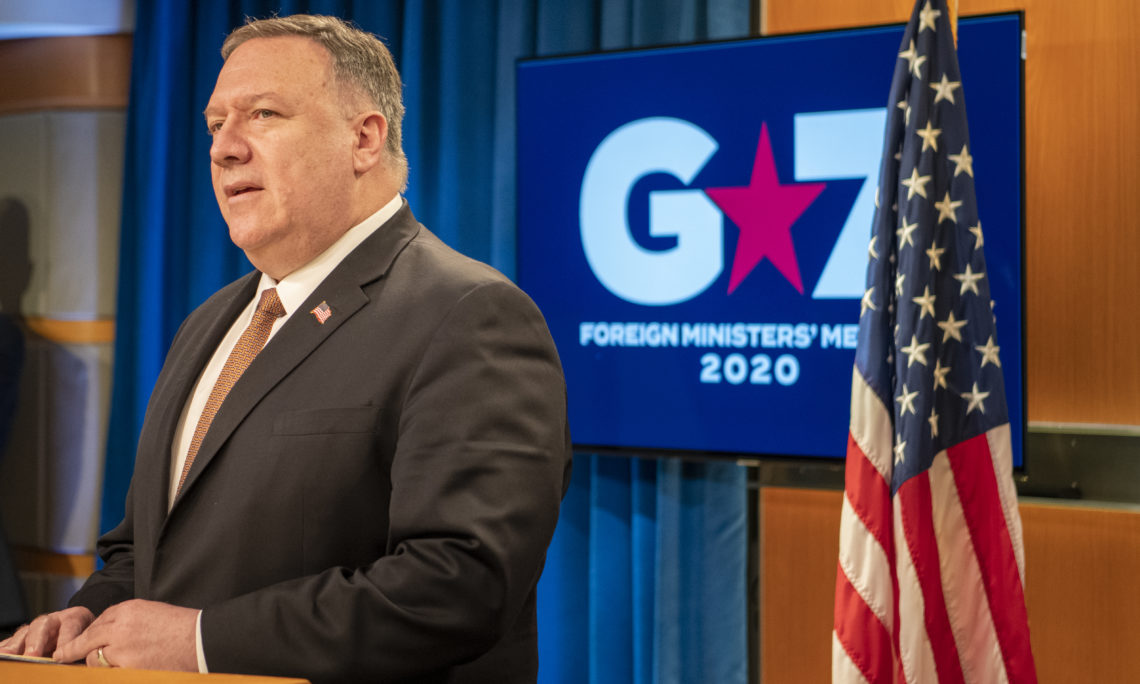 SECRETARY POMPEO:  Good morning, everyone.  Before I recap today’s ministerial, I want to address the ISIS-K claimed attack in Afghanistan.  The United States condemns the horrific ISIS-K claimed attack on a Sikh temple and community center in Kabul this morning which took the lives of more than two dozen innocent people.  The Afghan people deserve a future free from ISIS-K and other terrorist activity.  Despite the country’s political challenges, the ongoing Afghan peace process remains the primary opportunity for Afghans to come together to negotiate a political settlement and build a unified front against the menace of ISIS-K.  We encourage all Afghans to embrace this opportunity.

Now turning to the meeting today.

Today’s Virtual G7 Ministerial wasn’t the format we’d envisioned for the meeting when we drew it up, but I’m glad we had the chance to meet, if only by teleconference.

I want to thank the people in Pittsburgh for their support and assistance in planning the in-person event that we unfortunately had to cancel.  Certainly, the most pressing agenda item today was the Wuhan virus – something we’re all committed to fighting with transparency, as is necessary all around the world.

I made it clear to our G7 partners – especially to our friends in Italy and the rest of Europe – that the United States remains committed to assisting them in all ways possible.  This past Saturday, the United States Air Force sent a C-130 filled with medical supplies to Italy.  The U.S. military is also finalizing plans to make some of its excess medical equipment deployed there available to our Italian friends.

In addition, our private businesses, scientific community, NGOs, and religious organizations are answering the call to help.  Samaritan’s Purse, a private U.S. charity, set up a 68-bed field hospital in Cremona, a particularly hard-hit city in northern Italy.  This is the American people’s famous generosity at its finest.

Even as we spent substantial time on working to figure out how we would fight this virus together, we’re still keeping our eye on the ball on the other great challenges around the world, which I’ve grouped into categories:

First, we spent a substantial amount of time on threats posed by authoritarian states.  The Chinese Communist Party poses a substantial threat to our health and way of life, as the Wuhan virus outbreak clearly has demonstrated.  The CCP also threatens to undermine the free and open order that has underpinned our mutual prosperity and safety in the G7 countries.

I urged every one of the countries to work together to protect the UN and other organizations from its malign influence and authoritarianism.  We G7 countries must promote our shared values of freedom, sovereignty, good governance, transparency, and accountability, and push the UN to uphold these principles as well.

The group also spoke a great deal about Russia and holding it accountable for its aggression in Ukraine.  Real progress on eastern Ukraine must begin with Russia honoring its commitments under the Minsk agreements.  I also reiterated the simple truth:  Crimea is Ukraine.  The United States will never recognize Russia’s attempted annexation.

We spent time, too, talking about another group of challenges posed by unlawful proliferation.

On Iran, I thanked countries for the regime – holding the regime accountable for the malign activity through actions like banning Mahan Air and designating all of Hizballah and other Iran-backed terror groups as terrorist organizations.

Our pressure campaign remains designed to induce Iran to act like a normal country.  I urged our G7 partners to go further in joining us – and they should especially stand with the U.S. in ensuring that Iran never obtains a nuclear weapon.

Similarly, the G7, and all nations, must remain united in calling on North Korea to return to negotiations, and stay committed to applying diplomatic and economic pressure over its illegal nuclear and ballistic missile programs.

Another task before us that we discussed at length was to resolve longstanding conflicts:

On Afghanistan, we discussed the peace process.  I updated them on my recent visit, and how we can make intra-Afghan negotiations truly successful.

We also spent time discussing Syria, where Russia, the Iranian regime, Hizballah, and the Assad regime are threatening Europe with a humanitarian disaster and preventing a political solution in accordance with UN Security Council Resolution 2254.

We spoke on Libya.  Leaders there must exercise restraint, de-escalate, and reject toxic foreign interference, and engage seriously in UN-mediated discussions to determine Libya’s future.

And on Burma, the group was united – united in support of Burma’s democratic transition, economic reforms, and efforts to resist malign influences.

Burma must resolve the Rakhine State’s crisis, ensuring and including justice for victims of atrocities and accountability for those responsible – including senior military leaders.

And finally, we agreed to keep fighting vigorously against terrorism.  Terrorist attacks by ISIS – like the one I opened my conversation with today – and al-Qaida are increasing in the Sahel.  The region needs better governance and burden sharing from our partners – both in the region and globally – to restore peace and stability.  Signatories to the Algiers Accord for Peace and Reconciliation in Mali must fully implement that agreement.

Even when we are unable to meet in person, we had a successful visit.  And the Trump administration remains devoted to our allies and partners, and working with them in these kinds of productive multilateral formats.