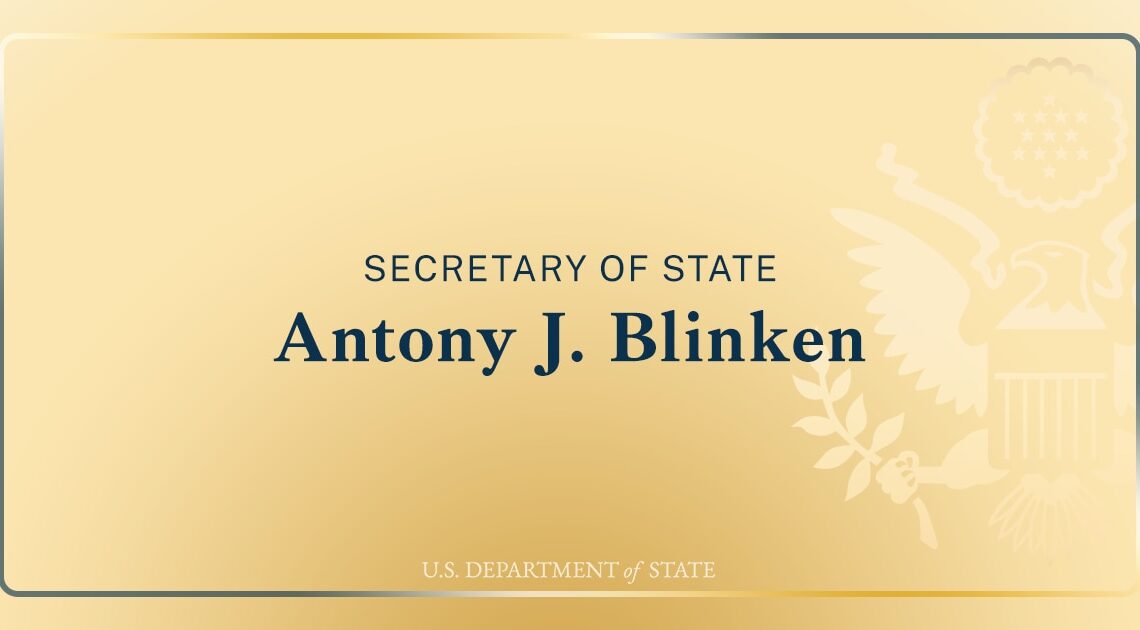 Secretary Antony J. Blinken at the UN Security Council Briefing and Consultations on the Humanitarian Situation in Syria

SECRETARY BLINKEN:  (In progress) and thank you, Dr. Ballour, both for the lifesaving service you performed for your fellow Syrians amidst the most harrowing circumstances, and for your powerful, determined efforts to bring the experiences of the Syrian people to the world – and to push for their rights to be respected.

This month marks the tenth anniversary of the Syrian uprising.  After a decade of conflict in which the Syrian people have suffered immeasurably, the situation is as grave as ever.  As we’ve heard, an estimated 13.4 million people – two in every three Syrians – are in need of humanitarian assistance.  Sixty percent of Syrians are at serious risk of going hungry.

Every month, the Security Council gathers to discuss the humanitarian situation in Syria, and these massive number are rattled off.  In the process, it’s all too easy to lose sight of the fact that contained in each one of these numbers are the lives of individual human beings.

Like the Syrian mother who recently told a reporter she was so desperate to feed her three children that she faced a choice, and I quote: “I had to sell my hair or my body,” end quote.  She sold her hair for $55.  For two days after, she wept with shame.  But with that money, she bought heating oil and food and clothes for her three kids.  That’s one mother – for one Syrian family.  Now remember that 12.4 million people in Syria are food insecure, and you begin to sense the magnitude of human suffering in this conflict.

You heard Dr. Ballour say waiting on the Security Council with hope, waiting on the Security Council with hope.  Look, we all sit in these chairs, we speak these words, we represent our countries.  But how is it possible that we can’t find in our hearts the common humanity to actually take meaningful action to do something?  How is that possible?  I have two young children of my own.  I suspect many members of this council have young children or grandchildren.  I think of my kids when I think of the Syrian children we’ve heard talked about today.  I ask you to do the same thing: Think of yours, look into your hearts, and then talk to your colleagues.  And despite our differences, we have to find a way to do something to take action to help people.  That is our responsibility, and shame on us if we don’t meet it.

Meanwhile, the brave people who put their lives on the line to try to help the Syrian people continue to be targeted.  On March 21st, the Assad regime shelled the Al-Atareb Surgical Hospital in western Aleppo, reportedly killing seven people, including, as we heard, two children – cousins 10 and 12 years old.  The attack also wounded 15 people, including a doctor who had a piece of shrapnel embedded in his eye.  He’ll never see again.

The hospital had been bombed by the regime before in 2014 and, as we heard from Dr. Lowcock, had to be rebuilt underground, in hopes that doing so would keep people safe if it were targeted again.

Well, the cave could not keep them safe.  The hospital’s coordinates had been shared – again, as we heard – with the UN-led deconfliction mechanism, meaning the regime knew exactly where it was.  Al-Atareb hospital, which is now closed, had previously seen an average of 3,650 people every month.  On the same day the Assad regime struck the hospital, Russian airstrikes struck near the only UN-authorized border crossing with Syria, killing a civilian, destroying humanitarian supplies, putting the most effective way of getting aid to the Syrian people at risk.

While today’s session is focused on the humanitarian crisis in Syria, it’s important to note that the only long-term solution to this suffering is through a political settlement and permanent resolution to the conflict, as outlined in UN Security Council Resolution 2254.  Together with our allies and partners, the United States continues to support UN Special Envoy Pedersen’s efforts toward this end.

But even as we work to that solution, we can’t lose sight of the urgent needs of the Syrian people that we’ve heard described so eloquently today.  It’s clear that these needs – including having enough to eat and access to essential medicine – are not going to be met by the Assad regime.  So, again, the question before us is: What can the Security Council do to help the millions of Syrians whose lives hang in the balance?

In the short term, we know the answer and it’s simple:  We must ensure Syrians get the humanitarian aid they need.  At present, the most efficient and effective way to get the most aid to the most people in the northwest and northeast is through border crossings.  Yet the Security Council has recently allowed the authorization for two border crossings to lapse: Bab al-Salaam in the northwest, which used to deliver aid to approximately 4 million Syrians; and al-Yaroubia in the northeast, which brought aid to another 1.3 million Syrians.

We have a responsibility to ensure Syrians have access to lifesaving assistance, no matter where they live.  Given that goal, there was no good reason at the time for the council’s failure to reauthorize these two humanitarian crossings.

And there is no good reason the crossings remain closed today.  The crossings provided a path for delivering aid that was more economical, safer, more efficient.  In their absence, delivering aid is costlier, more perilous, less efficient.  It also means that when the sole remaining crossing becomes inaccessible for any reason – as happened last week when it was bombed by Russian forces – aid may be halted altogether.

The reduction of border crossings also means that more UN aid convoys are forced to cross multiple lines of control, negotiating access with various armed opposition groups, traveling longer distances.  All of which leaves more ways aid can be slowed or stopped before it gets to the Syrian people, and more ways aid workers can themselves be targeted.

Now, some may argue that reauthorizing humanitarian crossings and providing cross-border aid would in some way infringe on the sovereignty of the Syrian regime.   But sovereignty was never intended to ensure the right of any government to starve people, deprive them of lifesaving medicine, bomb hospitals, or commit any other human rights abuse against citizens.

The failure to authorize border crossings is clearly not in the interest of the Syrian people.  It’s not what is recommended by UN experts or humanitarian experts.  And it has nothing to do with the humanitarian principles of humanity, neutrality, impartiality, and independence.  As Secretary-General Guterres has said, and I quote, “Intensified cross-line and cross-border aid deliveries are essential” – end quote – to reach all Syrians in need.

It’s also not in the interest of the Syrian people to pressure Syrian refugees to return to Syria, including to regime-held areas, where many fear they will be arbitrary detained, tortured, or even killed by Assad’s security forces in retaliation for fleeing.  We agree with the UN that refugee returns must be voluntary, well-informed, and should ensure the safety and dignity of the people involved – or else they should not happen.

The current approach is unjustified, ineffective, indefensible.  It is directly resulting in the increased suffering of the Syrian people.

So let me propose a different approach:  Let’s reauthorize both border crossings that have been closed, and reauthorize the one border crossing that remains open.  Let’s give ourselves more pathways, rather than fewer pathways, to deliver food and medicine to the Syrian people.  Let’s commit to using whatever pathway is the safest, quickest way to reach people who are going hungry and dying for need of medicine.  And let’s not pressure Syrian refugees to return until they feel they can do so in safety and in dignity.

Let’s make the simple question that guides our decision on reauthorizing cross-border crossings, and on all questions of delivering aid to people in Syria: What will do the most to reduce the suffering of Syrian children, women, and men?

If we ask that question, the work before this council is simple:  Reauthorize the crossings, stop enabling the obstruction of aid, and allow humanitarians and humanitarian aid unhindered access, so they can reach Syrians in need wherever they are, as quickly as possible.

Unhindered access to Syrians is more important than ever – not only because of the growing humanitarian crisis, but also because of the threat posed by COVID-19.

Every member of this council has witnessed in their own country the devastating impact of this pandemic – the lives it takes, how it ravages livelihoods and economies.  Syria today provides the ideal conditions for the virus to spread.  Social distancing is impossible when one is jostling for a spot in a crowded bread line.  Many Syrians do not even have a reliable supply of clean water and soap to wash their hands. There is approximately one Syrian doctor for every 10,000 civilians in Syria.  The hospitals that remain are still being attacked by the regime and its backers, as we saw with the Al-Atareb hospital.

Already, doctors, nurses, health workers in Syria are getting sick and dying at alarming rates due to COVID-19; that’s only going to get worse.  And perhaps none in Syria are more vulnerable than the thousands who are being unjustifiably detained in the regime’s inhumane prisons – many for daring to speak out against its atrocities – and the 6.7 million Syrians who have been internally displaced by the ongoing conflict.

The Security Council takes up so many challenges that are complicated.  This is not one of them. The lives of people in Syria depend on getting urgent help.  We have to do everything in our power to create ways for that aid to get to them – to open pathways, not to close them.