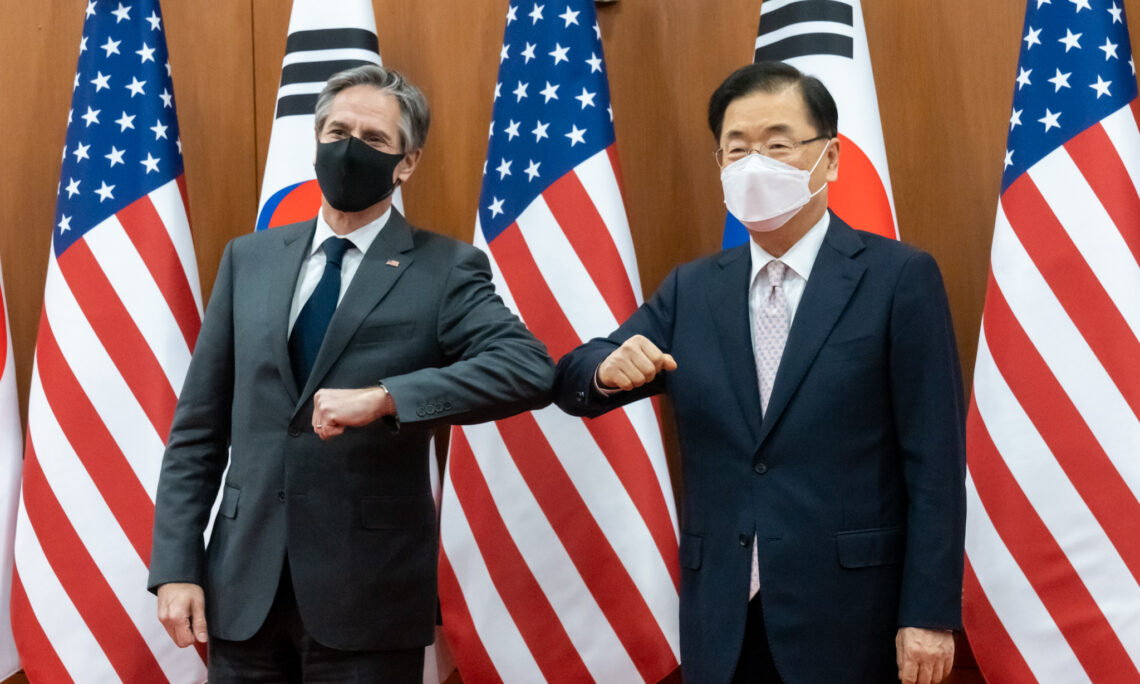 FOREIGN MINISTER CHUNG:  (Via interpreter.) I’d like to sincerely welcome Secretary Blinken on his visit to Korea.

In this regard, we would like to extend our special welcome to the Secretary of State and the Secretary of Defense of the Biden-Harris Administration who are visiting Korea in the very beginning of their terms in office.  It clearly shows the new U.S. administration’s emphasis on its allies.

In particular, the fact that we concluded negotiations for the Special Measures Agreement (SMA), which was a long-pending issue, just before the visit by Secretary Blinken reaffirms the strength of the Korea-U.S. Alliance.

President Moon Jae-in also appreciates the direction of Korea-U.S. relations since the inauguration of the Biden-Harris Administration.  Particularly, the President highly appreciates that we are holding the ROK-U.S. Foreign and Defense Ministers’ Meeting for the first time in five years.

During his phone conversation with President Biden last February, President Moon mentioned that Korea has full trust in the leadership of America, and as an ally that shares values, we will actively cooperate not only on Korean Peninsula and regional issues but also on global affairs.

Following the ROK-U.S. Foreign and Defense Ministers’ Meeting, I hope the Korea-U.S. Summit can be held in the near future so that we can carry on the momentum for developing Korea-U.S. relations.

On account of today’s meeting, I hope that today’s meeting will serve as an opportunity to advance Korea-U.S. relations in a sound, mutually-beneficial, and comprehensive way.  I also look forward to building the momentum towards the firm establishment and substantive progress on the Korean Peninsula peace process with the outcomes of today’s meeting

SECRETARY BLINKEN:  Well, Mr. Minister, Eui-yong, thank you.  And it is so wonderful to be here with you.  We’ve had the opportunity to speak on the phone, and I was so looking forward to being here in person and to spending time with you and your team and our team.

If you’ll allow me, just before we begin today’s meeting, I want to mention the attacks that happened just a few hours ago in Atlanta, in which several women were killed, including, we believe, four women of Korean descent.  We’re horrified by this violence, which has no place in America or anywhere, for that matter.  And I want to offer our deepest condolences to the families and friends of those who died and to everyone in the Korean community who is shaken and deeply disturbed by this incident.  We are as well, and we will stand up for the right of our fellow Americans and Korean Americans to be safe, to be treated with dignity and respect.

That’s a sentiment that I know my counterpart shares, because we are united, ultimately, by shared values.  And that’s really one of the fundamental reasons that I’m so glad to be back in Seoul as part of my first trip overseas as Secretary of State.  Mr. Minister, I want to congratulate you on your appointment.  Since our first conversation on February 11th, we’ve already become partners.  I’m looking forward to working very closely together to continue to strengthen what is an indispensable alliance between our countries.

As you know, I’m joined on this visit, as you referenced, by Secretary of Defense Austin.  We’ll be here tomorrow for the 2+2 ministerial meeting with the – with you and with minister of defense, and, of course, to witness the initialing of the SMA.  It’s no accident that we chose the Republic of Korea for the first Cabinet-level overseas travel of the Biden-Harris administration, along with Japan.  This alliance between us is, as we’ve said, the linchpin for peace, for security and prosperity, not just for our two nations but for the Indo-Pacific region and, indeed, for the world.  The alliance is unwavering, it’s ironclad, and it’s rooted in friendship, in mutual trust, and in shared values.

Secretary Austin and I are here to reaffirm the United States commitment to the alliance but also to build on it with you.  We want to achieve our shared vision of a free and open Indo-Pacific, anchored by respect for human rights, for democracy, for the rule of law.  And we’ll work together to address what are daunting challenges that we both face, including, of course, a pandemic that has affected literally billions of people and devastated economies; warming temperatures and rising seas; more sophisticated and harmful cyber attacks.  None are challenges that any one nation can effectively confront alone.  To deal with them effectively, we need to work together, and we need to work together ever more closely.  That’s why we’re committed to deepening our cooperation across the board, whether it’s stopping COVID-19 and preventing future pandemics, investing in clean energy transformation, shoring up our cyber capability, readiness and resilience.

Another shared challenge, of course, is North Korea’s nuclear weapons and ballistic missile program, which are a threat to the region and to the world.  We’ll continue to work together with the ROK and other allies and partners, including Japan, toward denuclearization of the DPRK.

And, of course, we’re standing together in support of our shared values.  We believe in democracy because we’ve seen how it makes our own country stronger and because democracies are more likely to be stable, secure, open, committed to human rights, all of which is in the interests of the American people and the Korean people.

It’s critical that we stand up for these values, especially now, because we are witnessing a dangerous erosion of democracy around the world, including in this region.  In Burma, the military is attempting to overturn the results of a democratic election, brutally repressing peaceful protesters, gunning down youth who are simply demanding a say in their country’s future.  China is using coercion and aggression to systematically erode autonomy in Hong Kong, undercut democracy in Taiwan, abuse human rights in Xinjiang and Tibet, and assert maritime claims in the South China Sea that violate international law.  And the authoritarian regime in North Korea continues to commit systemic and widespread abuses against its own people.  We must stand with people demanding their fundamental rights and freedoms and against those who repress them.

For decades, the alliance between the Republic of Korea and the United States has ensured the security and well-being of our people, and I think it’s our job not only to maintain our alliance, but to strengthen it so it can continue to provide that foundation for years – indeed, for decades – to come.  That’s why we’re here today, and I’m so grateful to you for this hospitality and look forward to getting down to work.  Thank you.