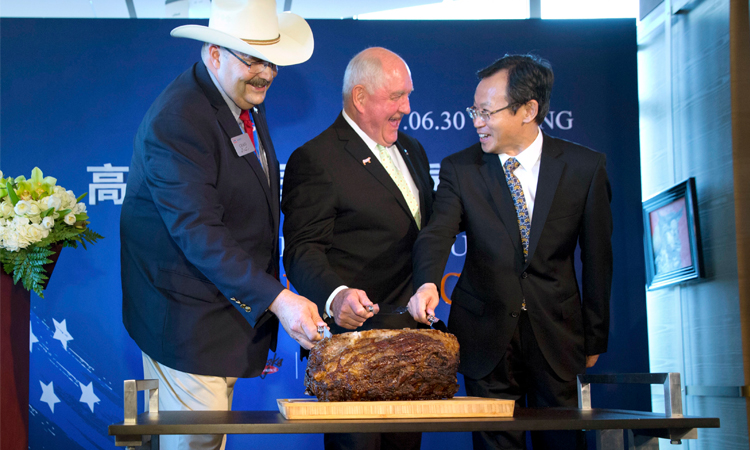 U.S. Secretary of Agriculture Sonny Perdue traveled to Beijing & Shanghai June 29-30 and July 1 to hold meetings with Vice Premiere Wang Yang and Minister Han Changfu of the Ministry of Agriculture as well as participate in special ceremonies to mark the return of high quality U.S. beef to the Chinese market after a 14 year hiatus.

During the ceremony to mark the return of high quality U.S. beef to China held in Beijing, Secretary Perdue said: “Beef is a big deal in China and I’m convinced that when the Chinese people get a taste of U.S. beef, they’re going to want more of it. These products coming into China are safe, wholesome, and very delicious. This is also a good harbinger of the kind of relationship that can be developed. We hope there are other things we can cooperate on and we’re going to use U.S. beef as the forerunner.”

Ambassador Branstad who joined the beginning of the Beijing ceremony remarked: “Welcoming beef back to China is like a new beginning of this very important and critical relationship between the two biggest economic powers in the world. We’re very proud to see this big step taken, and we’re hopeful that it’s just the beginning of many more that will happen between our countries… The return of U.S. beef to China is an example of how cooperation between our two countries can yield real results.”