Russian military and intelligence entities are engaging in this activity across Russia’s disinformation and propaganda ecosystem, to include malign social media operations, the use of overt and covert online proxy media outlets, the injection of disinformation into television and radio programming, the hosting of conferences designed to influence attendees into falsely believing that Ukraine, not Russia, is at fault for heightened tensions in the region, and the leveraging of cyber operations to deface media outlets and conduct hack and release operations.

Here are five major reoccurring Russian disinformation themes that the Kremlin is currently readjusting in an attempt to fill the information environment with false narratives about its actions in Ukraine.

Theme #1: “Russia is an Innocent Victim”

Russian government officials falsely portray Russia as a perpetual victim and its aggressive actions as a forced response to the alleged actions of the United States and our democratic allies and partners.  To further these claims, Russia turns to one of its favorite labels to attempt to hit back: “Russophobia.”  After invading Ukraine in 2014, the Russian government and state-controlled disinformation outlets began to accuse anyone who questioned Russia’s actions of being xenophobic Russophobes.

For example, Russia claims that the international community’s negative reaction to its invasion of an independent country was simply because people feared and hated Russia.  According to the chart below, Russophobia was not an issue of major concern to the Russian Foreign Ministry or state-funded disinformation outlets until the Russian military invaded Ukraine.  Claims of “Russophobia” persist across a range of topics and are employed whenever the Russian government wants to play the victim, when it is actually the aggressor. 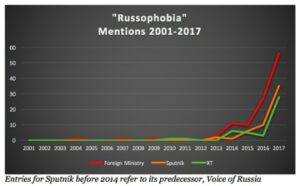 When history does not align with the Kremlin’s political objectives, Russian government officials and their proxy voices deny historical events or distort historical narratives to try to cast Russia in a more favorable light and serve its domestic and geopolitical agenda. For example, the 1939 non-aggression pact between the Soviet Union and Nazi Germany, also known as the Molotov-Ribbentrop Pact, which helped precipitate World War II, is politically inconvenient for the Putin regime.  In 2020, in an attempt to minimize and rationalize Stalin’s decision to align himself with Hitler, Putin published a twisted version of the start of World War II, downplaying the Soviet role and shifting blame for the war to other countries.  Russia often takes this a step further by labeling those who disagree with its twisted version of history as Nazis or Nazi sympathizers.

The Kremlin also applies this formula to the history of Ukraine’s statehood, NATO’s conduct during the collapse of the Soviet Union, its GULAG prison system, the famine in Ukraine known as  Holodomor, and many other events where the Kremlin’s historical actions do not serve its current political goals.

Theme #3: “The Collapse of Western Civilization is Imminent”

Russia pushes the false claim that Western civilization is collapsing and has strayed from “traditional values” because it works to ensure the safety and equality of LGBTQI+ people and promotes concepts such as female equality and multiculturalism. The demise of Western civilization is one of Russia’s oldest disinformation tropes, with claims of “the decaying west” documented since the 19th century.

This “values”-based disinformation narrative evokes ill-defined concepts including “tradition,” “family values,” and “spirituality.” Russia argues it is the bastion of so-called “traditional values” and gender roles and serves as a moral counterweight to the “decadence” of the United States and Western countries.  For example, President Putin has claimed the West has practically cancelled the concepts of “mother” and “father,” and instead has replaced them with “parent 1 and 2,” while Foreign Minister Lavrov wrote that Western students “learn at school that Jesus Christ was bisexual.”

The Kremlin has difficulty accepting that all individuals should have the human right to freedom of expression, and that the government should be accountable to its people.  Russia has accused the United States of either instigating uprisings or plotting “color revolutions” in Georgia, Kazakhstan, the Kyrgyz Republic, Moldova, Ukraine, and throughout the Middle East and Africa.  If a popular movement is pro-democracy and pro-reform and not deemed to be in Russia’s geopolitical interests, the Kremlin will often attack its legitimacy and claim that the United States is secretly behind it.  These baseless accusations often target local and international civil society organizations, as well as independent media that expose human rights abuses and corruption.  The Kremlin seeks to deny that people in neighboring countries could have agency, dignity, and independent aspirations to advocate for themselves, just as it denies these qualities to the people of Russia.

Theme #5:  Reality is Whatever the Kremlin Wants It to Be

The Kremlin frequently tries to create multiple false realities and insert confusions into the information environment when the truth is not in its interests.  Often intentionally confusing, Russian officials make arguments designed to try to shift the blame away from the Russian government’s role, even if some of the narratives contradict one another.  However, in time, presenting multiple conflicting narratives can itself become a technique intended to generate confusion and discourage response. Other elements in Russia’s disinformation and propaganda ecosystem, such as the abuse of state-funded disinformation outlets and weaponized social media, help push multiple false narratives.

It was clear to the world, for example, that Russia attempted to assassinate former Russian military intelligence officer Sergei Skripal and his daughter Yulia with the nerve agent Novichok in Salisbury, England, on March 4, 2018.  In the four weeks following that incident, Russian state-funded and directed outlets RT and Sputnik disseminated 138 separate and contradictory narratives via 735 articles, according to the Policy Institute at King’s College London.

Russia has used the same technique of flooding the information space with many false claims following other events, such as the downing of Malaysian Airlines Flight 17, and Russia’s 2008 invasion and ongoing occupation of Georgia, to distract conversations from their role in the events.  Again, the purpose is to confuse and distract others and manipulate the truth to suit Kremlin interests.