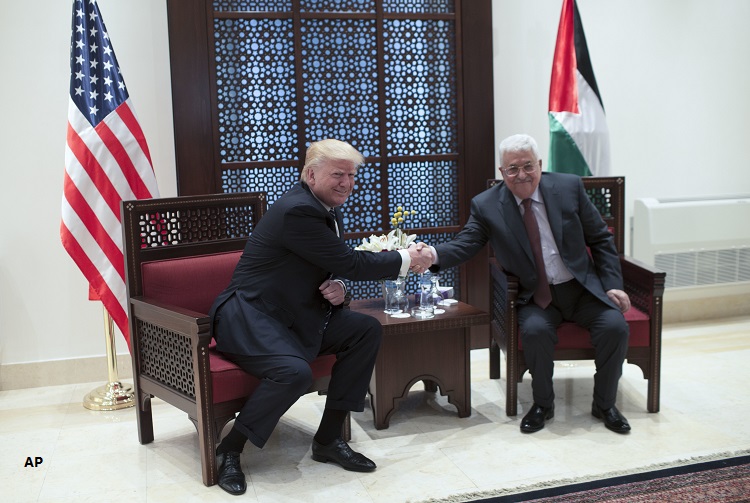 PRESIDENT ABBAS:  (As interpreted.)  In the name of God, the most gracious, the most merciful — Your Excellency, Mr. President and dear friend, Donald Trump, it’s my pleasure to welcome you here in Palestine and receive you as a great guest of our people here in Bethlehem, the birthplace of Jesus — peace be upon Him — from which the message of love, peace, and tolerance has spread out all across the globe.

Allow me at the beginning to condemn the horrible terrorist attack that occurred in Manchester city — the British city of Manchester — leaving tens of casualties and innocent people.  I do offer my warm condolences to the Prime Minister of Britain, families of victims, and the British people.

Your Excellency, meeting you in the White House early this month has given us and our Palestinian people, as well as also giving all the nations across the region so much hope and optimism of the possibility to make true a dream, a long-awaited dream and ambition, and that is lasting and justice-based peace.
Our Palestinian people’s attainment of their freedom and independence is the key to peace and stability in the world so that the children of Palestine and Israel enjoy a safe, stable, and prosperous future.

I would like to reiterate, Your Excellency, Mr. President, our commitment to cooperate with you in order to make peace and forge a historic peace deal with the Israelis.  And we would like to reassert our willingness to continue to work with you as partners in fighting terrorism in our region and in the world.  In this respect, I commend the importance of the holding of the Arab Islamic American Summit and its findings and outcomes and conclusions.

Your Excellency, Mr. President, once again we reassert to you our positions of accepting the two-state solution along the borders of 1967 — the state of Palestine with its capital as East Jerusalem, living alongside the state of Israel in peace and security and good neighborhood, as well as resolving the entire final status issues based on international law and international long-term resolutions, and respecting side agreements which sets the tone for the implementation of the Arab Peace Initiative in accordance with what has been reaffirmed in the most recent Arab Summit in Jordan.

Your Excellency, as you have witnessed during your — as you saw yesterday during your historic visit of holy sites in occupied East Jerusalem, and today in Bethlehem, the conflict is not between religions, for respecting religions and prophets is an integral part of our religion and faith.  And we are keen to keep the door open to dialogue with our Israeli neighbors from all walks of life in order to boost confidence and create a genuine peace opportunity.

Our fundamental problem is with the occupation and settlements, and failure of Israel to recognize the state of Palestine in the same way we recognize it, which undermines the realization of the two-state solution.  The problem is not between us and Judaism.  It’s between us and occupation.

I would like to draw the attention to the issue of our Palestinian prisoners, who have been on hunger strike for more than one month, meters away from here in the vicinity of the Church of the Nativity.  And everywhere, all across Palestine, families, mothers of prisoners, suffer from being denied visits to their children.  And their demands are humane and just.  I demand the Israeli government to meet these humane, legitimate demands.

Achievement of peace, Your Excellency, the President, will give us broad horizons and prospects to recover our economy and continue building our national institutions based on rule of law and in the spirit of tolerance and coexistence, and a culture of peace, nonviolence, no incitement, and building bridges instead of walls inside our lands.

Once again, I greet you with the warmest regards, Your Excellency, the President, and your accompanying delegation.  I welcome you in Palestine, the Holy Land, wishing you success in your important tour, which will lead you to meeting His Holiness, the Pope, Francis, and whose efforts — whose dedicated, devoted efforts for peace we appreciate.  Wishing you and the friendly American people a lifetime of health and happiness.

PRESIDENT TRUMP:  Thank you very much.

We stand in absolute solidarity with the people of the United Kingdom.  So many young, beautiful, innocent people living and enjoying their lives murdered by evil losers in life.  I won’t call them monsters because they would like that term.  They would think that’s a great name.  I will call them from now on losers because that’s what’s they are.  They’re losers.  And we’ll have more of them.  But they’re losers — just remember that.

This is what I’ve spent these last few days talking about during my trip overseas.  Our society can have no tolerance for this continuation of bloodshed, we cannot stand a moment longer for the slaughter of innocent people.  And in today’s attack, it was mostly innocent children.

The terrorists and extremists, and those who give them aid and comfort, must be driven out from our society forever.  This wicked ideology must be obliterated — and I mean completely obliterated — and innocent life must be protected.  All innocent lives.  Life must be protected.  All civilized nations must join together to protect human life and the sacred right of our citizens to live in safety and in peace.

I want to offer my deep appreciation to the Palestinians and President Abbas for hosting me today.  It’s an honor to join you in Bethlehem — the city that is precious to people from all over the world.  It’s a precious city.

As I discussed with President Abbas in Washington earlier this month, I am committed to trying to achieve a peace agreement between the Israelis and the Palestinians and I intend to do everything I can to help them achieve that goal.  President Abbas assures me he is ready to work toward that goal in good faith.  And Prime Minister Netanyahu has promised the same.  I look forward to working with these leaders toward a lasting peace.

I also look forward to working with President Abbas on other important matters, such as unlocking the potential of the Palestinian economy — which is having a very rough time — and building on our very positive counterterrorism efforts.

Several days ago in Saudi Arabia, I met with the leaders of the Muslim world and Arab nations from all across the region.  It was an epic gathering.  It was a historic event.  King Salman of Saudi Arabia could not have been kinder, and I will tell you, he’s a very wise, wise man.  I called on these leaders and asked them to join in a partnership to drive terrorism from their midst once and for all.

I was gratified that President Abbas joined the summit and committed to taking firm but necessary steps to fight terrorism and confront its hateful ideology.  And it’s so interesting that our meeting took place on this very horrible morning of death to innocent young people.

Peace can never take root in an environment where violence is tolerated, funded and even rewarded.  We must be resolute in condemning such acts in a single, unified voice.  Peace is a choice we must make each day — and the United States is here to help make that dream possible for young Jewish, Christian and Muslim children all across the region.  In so doing, we will all enjoy a safer and brighter future, and a safer and brighter world.

In this spirit of hope, we come to Bethlehem, asking God for a more peaceful, safe, and far more tolerant world for all of us. I am truly hopeful that America can help Israel and the Palestinians forge peace, and bring new hope to the region and its people.  I also firmly believe that if Israel and the Palestinians can make peace, it will begin a process of peace all throughout the Middle East.  And that would be an amazing accomplishment.

Thank you very much.  Thank you.  (Applause.)