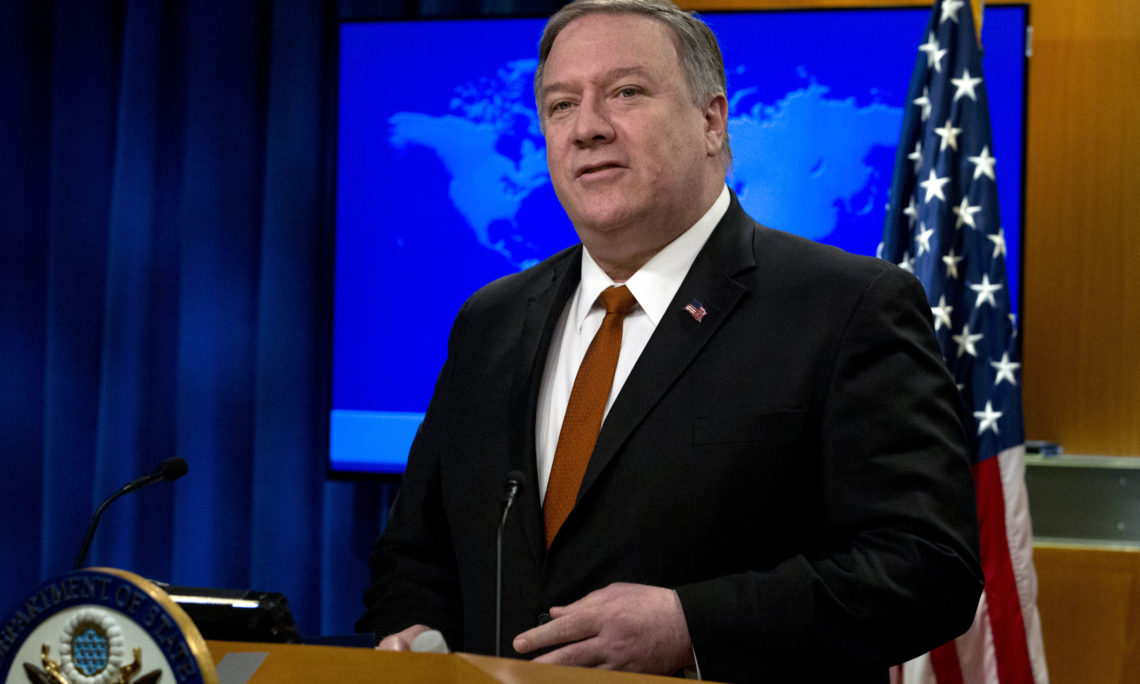 Secretary of State Mike Pompeo speaks during the release of the 2018 Country Reports on Human Rights Practices at the Department of State in Washington, Wednesday, March 13, 2019. (AP Photo/Jose Luis Magana)

SECRETARY POMPEO: Good morning, everyone. Since America’s founding, the concept of individual rights has been woven into the national fabric. As my friend and scholar Mary Ann Glendon has written, it has given weak members of our society, quote, “an instrument to amplify their voices” and also allows us to, quote, “train a spotlight” on the appalling violations of human life, liberty, and dignity that occur every day in many parts of the world.

Consistent with our strong rights tradition, today it is my honor as Secretary of State to announce the release of the 2019 Human Rights Report. Now, every year since 1977, the State Department has through this report put the world on notice that we’ll expose violation of human rights wherever they occur. We have told those who disgrace the concept of human dignity they will pay a price, that their abuses will be meticulously documented and then publicized.

By articulating abuses and pressuring noncompliant regimes, we can effect change. We’ve certainly seen that. Over the years, this report has pushed governments to change course and cease engaging in brutality and other abuses. We hope that it will continue to do so and cause oppressive regimes to honor human rights in places where those voices are often silenced and where deep yearnings for tolerance and respect have for too long gone unfulfilled.

This year’s report evaluates the practices of roughly 200 countries and territories. It represents a giant collaboration between hundreds of officers at U.S. missions around the world and here at the Department who are doing the Lord’s work in defending the dignity of their fellow man. I’m proud of each and every one of them.

I wish I could say that the record of every country evaluated in this year’s report is spotless or even improved, but it’s simply not the case.

Take Iran. Last year, the regime killed over 20 people and arrested thousands without due process just for protesting for their rights. The government banned media outlets from covering the demonstrations. This continues the pattern of cruelty that the regime has inflicted upon the Iranian people for the last four decades.

Meanwhile, in South Sudan, military forces waged sexual violence against civilians based on their political allegiances and their ethnicity.

In Nicaragua, when citizens peacefully protested social security benefits, they were met with sniper fire. Critics of the government have faced a policy of exile, jail, or death.

Then there’s China, which is in a league of its own when it comes to human rights violations. In just 2018, China intensified its campaign of detaining Muslim minority groups at record levels. Today, more than 1 million Uyghurs, ethnic Kazakhs, and other Muslims are interned in reeducation camps designed to erase their religious and ethnic identities. The government also is increasing its persecution against Christians, Tibetans, and anyone who espouses different views from those or advocates those of government — or advocates change in government.

Even some of our friends, allies, and partners around the world have human rights violations. We document those reports with equal force. Our aim is always to identify human rights challenges and use American influence and power to move every nation towards better, more consistent human rights practices.

As I suggested at the beginning, our committed defense of human rights stems from America’s founding principles. It’s our tradition. America is founded on those self-evident truths that each of us is endowed with the rights that cannot be forfeited. They are the ones upon which no government anywhere in the world should be allowed to tread. Our Constitution codified those rights into law, and with time, they became not known as American rights, but more fundamentally across the world as human rights.

Internationally, indeed, they were incorporated in the Universal Declaration of Human Rights in 30 short articles. Scores of countries have looked to these documents for their inspiration as they drafted their own constitution and founded their own nations. Today, the State Department continues to play a leading role in championing human rights across the globe, honoring the vision of our founders and expressing our time-honored American aspiration for all people to be free.

By issuing today’s report, we deploy the truth – the truth about abuses occurring around the globe – as one of the most powerful weapons in America’s diplomatic arsenal. Thank you, and I’ll now turn it over for questions to Ambassador Kozak.