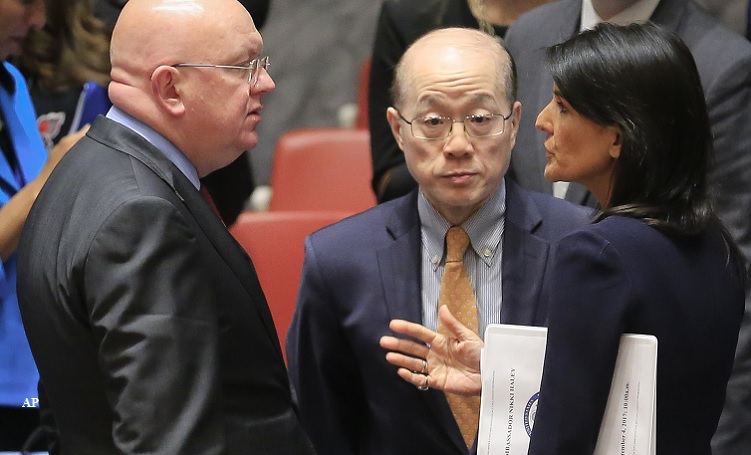 Thank you, Mr. President, and thank you for calling this meeting and allowing us to have this vote.

The images from space of northeast Asia at night show brightness and prosperity surrounding a dark, lonely space that is North Korea. Those images are a good illustration of where the North Korean regime is today. It is alone. It is dark. And it’s getting darker.

North Korea’s neighbors, its trading partners, and the entire international community are united against its dangerous and illegal actions. Today’s resolution builds on what were already the deepest cutting sanctions ever leveled against North Korea. We’ve been down this road before. The Security Council has expressed its condemnation. We’ve leveled sanctions. But today is different. We are acting in response to a dangerous new development: North Korea’s September 3 test of a claimed hydrogen bomb.

Today, we are saying the world will never accept a nuclear-armed North Korea. And today, the Security Council is saying that if the North Korean regime does not halt its nuclear program, we will act to stop it ourselves.

Previous efforts to bring North Korea to the negotiating table have failed. They have repeatedly walked back every commitment they have made. Today, the Security Council has acted in a different way. Today, we are attempting to take the future of the North Korean nuclear program out of the hands of its outlaw regime.

We are done trying to prod the regime to do the right thing. We are now acting to stop it from having the ability to continue doing the wrong thing. We are doing that by hitting North Korea’s ability to fuel and fund its weapons program. Oil is the lifeblood of North Korea’s effort to build and deliver a nuclear weapon. Today’s resolution reduces almost 30 percent of oil provided to North Korea by cutting off over 55 percent of its gas, diesel, and heavy fuel oil. Further, today’s resolution completely bans natural gas and other oil byproducts that could be used as substitutes for the reduced petroleum. This will cut deep.

Further, a large portion of North Korea’s revenues come from exports, revenues they use to fund their nuclear program. Last month, we passed a resolution banning its coal and iron exports. Today’s resolution bans all textile exports. That’s an almost $800 million hit to its revenue.

When these new stronger sanctions are added to those passed last month, over 90 percent of North Korea’s publicly reported exports are now fully banned. Moreover, this resolution also puts an end to the regime making money from the 93,000 North Korean citizens it sends overseas to work and heavily taxes. This ban will eventually starve the regime of an additional $500 million or more in annual revenues. Beyond the $1.3 billion in annual revenues we will cut from North Korea, new maritime authorities will help us stop them from obtaining funds by smuggling coal and other prohibited materials around the world by ship.

Furthermore, this resolution prohibits all joint ventures with the regime, resulting in a significant amount of lost revenue. But more importantly, the regime can no longer obtain critically needed foreign investments, technology, and know-how needed for its commercial industries.

Finally, this resolution imposes asset freezes on the most central North Korean regime entities, affecting both the military and the government itself. In short, these are by far the strongest measures ever imposed on North Korea. They give us a much better chance to halt the regime’s ability to fuel and finance its nuclear and missile programs.

But we all know these steps only work if all nations implement them completely and aggressively. Today’s resolution would not have happened without the strong relationship that has developed between President Trump and Chinese President Xi, and we greatly appreciate both teams working with us. We have seen additional encouraging signs that other nations in Asia have stepped up to the plate. The Philippines has cut off all trade with Pyongyang. Thailand has drastically cut its economic ties with North Korea. And states much further away are also doing their part. Mexico recently declared the North Korean ambassador to its country persona non grata. Along with strictly enforcing sanctions, these are important steps toward complete international unity. They make clear that all nations can act to deny North Korea the funds to build its nuclear arsenal.

Today is a solemn day in the United States. It is the 16th anniversary of the terrorist attacks that killed nearly three thousand innocent people – most of them in this very city. It hurts as much today as it did 16 years ago. We will never forget the victims of September 11. And we will never forget the lesson that those who have evil intentions must be confronted.

The North Korean regime has demonstrated that it will not act on its own to end its nuclear program. The civilized world must do what the regime refuses to do. We must stop its march toward a nuclear arsenal with the ability to deliver it anywhere in the world. We must do that by cutting off the fuel and the funding that supports it.

We don’t take pleasure in further strengthening sanctions today. We are not looking for war. The North Korean regime has not yet passed the point of no return. If it agrees to stop its nuclear program, it can reclaim its future. If it proves it can live in peace, the world will live in peace with it.

On the other hand, if North Korea continues its dangerous path, we will continue with further pressure.

The choice is theirs.