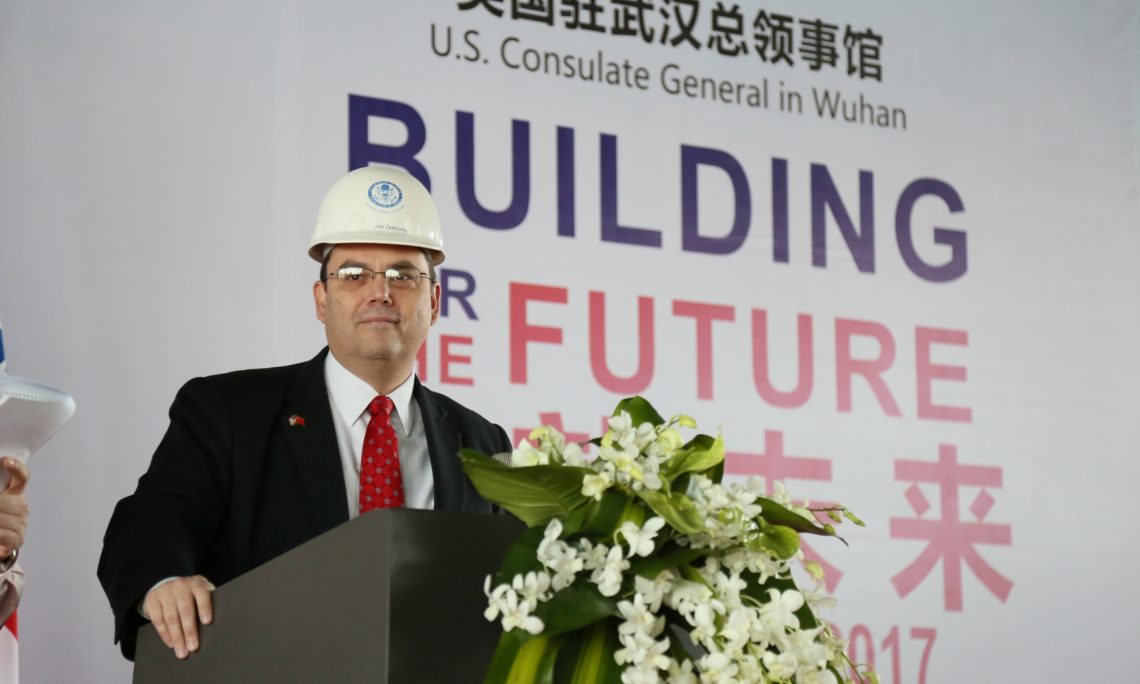 As U.S. Consul General, it is my great pleasure to welcome you to the Groundbreaking Ceremony for our new Consulate office in Wuhan!    Thank you all for joining us today.

I would especially like to thank Mayor Wan, and Director General Yan representing the Hubei Provincial Government for being part of today’s event.   Your presence here is extremely meaningful.   We are here as a partner with the city of Wuhan, and with Hubei Province and all four central provinces in our district.

Since our consulate reopened in 2008…nearly nine years ago, it has been a clear symbol of the importance the United State places on Wuhan and on Central China as a region.  Central China is growing faster than the national average.  Central China is rising and we want to be a part of that.

I love history, especially the history about our consulate here in central China, and I recently discovered a document written by the American Consul General here in Wuhan 100 years ago.  It started and I quote “A glance at the map of China will convince any observer of the natural trade advantages of Hankow (Wuhan), situated in the heart of China.”  ….and that is just as true today as it was in 1917.

Even in my time in Wuhan, I have seen the city change and progress significantly, with the non-stop flight from Wuhan to San Francisco—I have had a chance to take it myself….on the Boeing 787 Dreamliner, that is now definitely much faster and much more comfortable to than the trips was 100 years ago.   We have seen new bridges cross the Yangtze, new metro lines expand across the city and now even out to the airport.

First announced in 2012, the expansion of our consulate has been long anticipated.  After many years of careful planning and coordination, it is finally time for action!  We are “Building for the Future!”

The construction of our new facility is scheduled to start right here this month!  I particularly wanted to hold this event in our actual future facility to give all of you a glimpse of what the future holds.   We are happy to have Minsheng Bank as our new home in Wuhan.   I would also like to take this opportunity to recognize Mr. Tim Williams from Williams Building Company and Mr. Luo from Hua Xi who will be building our new home for us.

Our consulate has grown from one American diplomat when it first reopened….and from when I arrived nearly three years ago—there were two American diplomats.  Today we have seven and we will continue to grow until eventually reaching 30 diplomats after our new facility opens in 2018.    We will also have a local staff of over 80 employees.

So what does our “Building for the Future” mean to you, the people of Wuhan and central China?

First, it will be an expansion in services for both Chinese and American citizens.

For Chinese citizens, in answer to the question I most often get asked, “Yes!” the new consulate will provide non-immigrant visa services.

And for my fellow American citizens, you will be able to benefit from the full range of routine and emergency services, including Passport, Report of Birth Abroad, and Notary Services.

As to when these services will start, the construction project to outfit our new office is starting this month and will be completed in summer 2018.  We expect to be open for visa and American Citizen Services shortly after the completion of construction.

Second, “Building for the Future” means an increased focus on expanded commercial ties between the U.S. and central China.

We think of our consular district, the provinces of Henan, Hubei, Hunan, and Jiangxi as a “new frontier” for business opportunities.  We recognize the importance of Central China in business and trade, especially in automotive and high tech, and so in 2014 we opened our Commercial Office here in Wuhan.  We now have an American Commercial Officer working with local staff, and partnering with the American Chamber of Commerce, Bureaus of Commerce and CCPITs to promote business and trade in both directions.  One of our staff members recently led a delegation to the Consumer Electronics show in Las Vegas… the largest delegation from any of the regions of China.

I am also excited that the U.S. Department of Agriculture is working diligently to open a Trade Office at the consulate later this year. This office will promote quality American agricultural products like apples and cherries, pecans and almonds and a large variety other popular food products.  I am looking forward to introducing American wine and spirits too.

We welcome to our event today representatives from our Central China Chapter of American Chamber of Commerce, and people from the American companies present here in Wuhan, like Diamond Power, Pfizer, General Electric, Cummins, General Motors, Synposys and others.

Third, “Building for the Future” means more opportunities to promote mutual understanding between the people of the U.S. and central China.

The U.S. – China relationship is the most important in the world and one we need to get right!  And so I’m thrilled that our future office will have facilities to welcome the public to come learn more about America!  There will be a large multi-purpose room that we can use to host events on American culture such as lectures, movie nights, art and music! There will also be an American Space resource area that will have computers, books, and other information on English language, study in the U.S. and more!

I look forward to our new Consulate office here being a welcoming place, for those seeking consular services, for those looking to expand business and trade and for those wishing to learn about America.  I hope that we will ALL gather again next summer when the project is completed to celebrate the grand opening of our new consulate.

And now, I would like to introduce a very important guest, our Chargé  d ’Affairs—our Acting Ambassador, Mr. David Rank.   David played a very important role in the establishment of our consulate here in Wuhan and we’re very honored to have him here to as part of our celebration.    David…