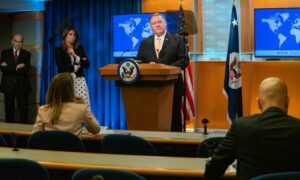 Remarks to the Press

Now turning to the State Department’s truly heroic efforts to repatriate Americans.  It was Superbowl Sunday, February 2nd, when we all still had live sports on TV.  Our team was working that day to arrange two flights to bring home Americans from Wuhan, China.  One of our medical team’s leaders wrote an email to his colleagues.  I want to read part of it to you.

The colleague wrote, quote:  “While the whole country enjoys the game in the comfort of home or a pub, most will have no idea that a small group heads into the heart of the global outbreak with the singular focus of bringing their fellow countrymen out of hellacious conditions.  No matter how it turns out, we happy few have dared greatly and given ourselves over to this worthy cause.”  End of quote.

That mission was completed, bringing home more than 800 people from Wuhan, and it was the beginning of one of the most important and unprecedented missions in the history of the State Department.  As of today we have repatriated over 20 – I think it’s 6, or 27,000 U.S. citizens from more than 50 countries.  The stories of our team’s heart and character and commitment to excellence are truly amazing.  Let me give you just a couple of examples.

Never in the department’s 230-year history have we led a worldwide evacuation of such enormous geographic complexity and such geographic scale.  We have no higher duty to the American people than to pull this off.  I’ve never been more proud of how the team’s done than I am today.  The 24/7 repatriation task force will continue to bring home thousands more Americans in the coming days and weeks.

At the same time, I want to deliver a message to Americans who are still abroad.  We remain steadfast and committed to getting you all back.  We do not know in some countries how long the continued commercial flights in your country may continue to operate.  We can’t guarantee the U.S. Government’s ability to arrange chartered flights indefinitely where commercial options no longer exist.  I urge Americans to register with their nearest embassy at step.state.gov and work your way back here.  Americans abroad who wish to return home should do so immediately and make arrangements to accomplish that.

Look, I’m just as proud of the work we’re doing on repatriation as I am about the health and humanitarian assistance that the State Department’s providing around the world, too.  It’s a topic that deserves more attention; we don’t talk about it all that often.  In America, we provide aid because we’re a generous and noble people.  We also do it because we know, from prior experiences, that we don’t have good data, full transparency, and all that effort to fight pandemics that can harm Americans back home too.  For both of these reasons, the United States was one of the first nations to step forward and offer help.

In early February – it seems like a long time ago – in early February, we transported nearly 18 tons of medical supplies provided by Samaritan’s Purse, the Church of Jesus Christ of Latter-day Saints, and others to Wuhan.  That same month, we pledged $100 million in assistance to countries to fight what would become a pandemic, including an offer of assistance to China.

Our response, so far, surpasses that initial pledge significantly.  We’ve now made available a total number $274 million in funding to as many as 64 countries.  That money will go to some of the world’s most at-risk peoples.  You can go to state.gov to find a fact sheet.  We’ll talk about what we’re doing country by country.  It’ll give the breakdown.  We put that up at the end of last week.

We’ve been at this a long time.  We know how to help people around the world.  Since 2009, American taxpayers have generously funded more than 100 billion in health assistance and nearly 70 billion in humanitarian assistance.  That’s billion with a B.

But our help is much more than money.  The CDC has six staffers on the ground working with Namibia’s health ministry.  The FDA, as an example, is cochairing a virtual international conference on developing a COVID-19 vaccine.  Americans from all across the Trump administration are working diligently to put this crisis back in the box.

Another example.  We’re working constantly with NGOs to deliver medicines, medical supplies, and food to those in need in Syria, including in regime-held areas.  This is a humanitarian crisis.  Two, we’ll continue helping UN agencies and NGOs build more water, sanitation, and health facilities in camps and informal IDP settings all across northern Syria to help prevent the spread of the virus in that difficult place.

And as I referenced earlier, it isn’t just our government helping around the world.  American businesses, private charities have given $1.5 billion to the world to fight this pandemic.  This is truly American exceptionalism at its finest.

Our generosity, our pragmatism aimed at saving American lives now and in the future is also exemplified through our work with multilateral organizations.  It’s another underreported story.  We’ve long maintained an unsurpassed commitment to global health and humanitarian assistance.  Consider just the top end of this – our financial support for international organizations, never mind all the scientists and technical people and other expertise that we bring around the world.

The United States remains by far the largest contributor to the World Health Organization, as we’ve been since 1948.  Our contribution exceeded $400 million last year, 10 times that of China.  The U.S. contributed nearly $1.7 billion to the UN Refugee Agency, which is helping those least able to mitigate their exposure to the virus.  This compares to 1.9 million from China.

UNICEF is engaged in emergency actions in dozens of countries all across the globe, including in China and in Iran.  In 2019, the U.S. supported UNICEF with more than $700 million.  China gave just a mere fraction of that.

The World Food Program, headed by America’s own David Beasley, has sent more than 85 shipments of food and personal protection equipment to 74 countries to help them battle the virus.  And we’ve provided $8 billion in resources just last year, 42 percent of that organization’s budget.

Look, you all get the idea.  We don’t talk about assistance much, but the American people should be aware of and proud of our vast commitments to these important institutions.  They not only help citizens around the world, but they protect Americans and keep us safe here as well.

And lastly, you asked a question about disinformation in the moment here with the COVID-19 challenge.  I see it every day.  Every morning I get up and I read the data set from across the world, not only the tragedy that’s taking place here.  We’ve had a State Department official pass away as a result of this virus, one of our team members.  We now have 3,000 Americans who have been killed.  This is tragic.  My prayers go out to every American and every American family impacted by this.

This data set matters.  The ability to trust the data that you’re getting so that our scientists and doctors and experts at the World Health Organization and all across the world who are trying to figure out how to remediate this, how to find therapies, how to find – identify a solution which will ultimately be a vaccine, to determine whether the actions that we’re taking – the social distancing, all the things that we’re doing, limiting transportation, all those things we’re doing –  to figure out if they’re working so that we can save lives depends on the ability to have confidence and information about what has actually transpired.

This is the reason disinformation is dangerous.  It’s not because it’s bad politics.  It is because it puts lives at risk if we don’t have confidence in the information that’s coming from every country.  So I would urge every nation:  Do your best to collect the data.  Do your best to share that information.  We’re doing that.  We’re collecting, we’re sharing, and we’re making sure that we have good, sound basis upon which to make decisions about how to fight this infectious disease.  That’s the risk that comes when countries choose to engage in campaigns of disinformation across the world.