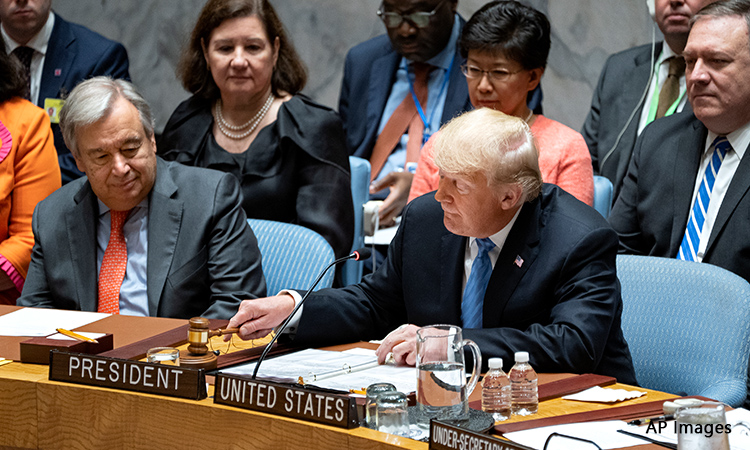 PRESIDENT TRUMP: Thank you very much. The 8,362nd meeting of the Security Council is called to order.

The agenda for this meeting is: “Maintenance of International Peace and Security: Non-proliferation of Weapons of Mass Destruction.”

The agenda is hereby adopted.

I am honoured to be here today to chair this meeting of the United Nations Security Council. It is also my privilege to welcome the distinguished Heads of State, Heads of Government, Ministers, and other leaders and representatives here with us. Thank you.
I also wish to warmly welcome Secretary General António Guterres for joining us. Thank you very much, Mr. Secretary General.

The Security Council will now consider Item Two of the agenda. I will make a statement in my capacity as the President of the United States of America:

It is a great honor to be here today at this U.N. Security Council briefing to discuss a matter of urgent importance concerning and countering the proliferation of deadly chemical, biological, and nuclear weapons and the means to deliver them.

The nations of the world have long recognized that certain weapons are so dangerous, and can inflict so much suffering, that all of us have a vital interest in preventing their further development, spread, and use.
Since my inauguration, the United States has taken bold action to confront these sinister threats.

Many of us are rightly focused on the dangers of nuclear weapons, but we must never forget the risk posed by biological and chemical weapons.

The United States was one of the first nations to unilaterally renounce the use of biological weapons, and since World War I, we have led international efforts against the scourge of chemical warfare.
Most recently, in Syria, we have twice imposed severe consequences on the Assad regime for using chemical weapons against innocent civilians. I want to thank Prime Minister May and President Macron for their countries’ close partnership in those efforts last April.

The Syrian regime’s butchery is enabled by Russia and Iran. The Iranian regime exports violence, terror, and turmoil. It illicitly procures sensitive items to advance its ballistic missile program and proliferates these missiles all across the Middle East.

The regime is the world’s leading sponsor of terror and fuels conflict across the region and far beyond. A regime with this track record must never be allowed to possess a nuclear weapon.

For this reason, I announced earlier this year that the United States would withdraw from the Iran nuclear deal.

This horrible, one-sided deal allowed Iran to continue its path towards a bomb and gave the regime a cash lifeline when they needed it the most. They were in big, big trouble. They needed cash. We gave it to them.

In the years since the deal was signed, Iran’s aggression only increased. The regime used new funds from the deal to support terrorism, build nuclear-capable missiles, and foment chaos.

After that, the United States will pursue additional sanctions, tougher than ever before, to counter the entire range of Iran’s malign conduct. Any individual or entity who fails to comply with these sanctions will face severe consequences.

I ask all members of the Security Council to work with the United States to ensure the Iranian regime changes its behavior and never acquires a nuclear bomb.

With all of this said, I want to thank Iran, Russia, and Syria for — at my very strong urging and request — substantially slowing down their attack on Idlib Province and the 3 million people who live there in order to get 35,000 targeted terrorists. Get the terrorists, but I hope the restraint continues. The world is watching.

Thank you also to Turkey for helping to negotiate restraint. Anything the USA can do to help resolve this problem in order to save perhaps even hundreds of thousands of lives, maybe more, we are willing and able. We are available to help.

In my remarks yesterday to the United Nations General Assembly, I laid out my administration’s commitment to building a more just and peaceful future.

Regrettably, we found that China has been attempting to interfere in our upcoming 2018 election coming up in November against my administration. They do not want me, or us, to win because I am the first President ever to challenge China on trade. And we are winning on trade. We are winning at every level. We don’t want them to meddle or interfere in our upcoming election.

As I also mentioned yesterday, we have seen the results of historic efforts to open new pathways to peace on the North Korean Peninsula — on the Korean Peninsula. And that’s something we are extremely proud of.

In June, I held a historic summit with Chairman Kim Jong Un in Singapore, where he reaffirmed his commitment to complete denuclearization. Last week, Chairman Kim reiterated that commitment to President Moon at their third summit, and to me in a very strong letter form.

I think we will make a deal. But unfortunately, to ensure this progress continues, we must enforce existing U.N. Security Council resolutions until denuclearization occurs.

However, we have detected that some nations are already violating these U.N. sanctions. This includes illegal ship-to-ship transfers, which must end immediately. The safety of the Korean Peninsula, the region, and the world, depends on full compliance with U.N. Security Council resolutions. Very, very important.

But most importantly, I believe that Chairman Kim Jong Un, a man I have gotten to know and like, wants peace and prosperity for North Korea. Many things are happening behind the scenes — away from the media, which nobody knows — but they are happening nevertheless and they are happening in a very positive way. So I think you will have some very good news coming from North Korea in the coming months and years.

Each of us follows in the footsteps of countless world leaders, diplomats, and public servants who came here to the United Nations with the same noble goal: to build a future worthy of the patriots — true, true patriots — who sacrificed their lives for our nation and for our future.

To be successful, we need a commitment of every nation represented in this chamber. Acting together, we can replace the horrors of war with the blessings of safety and the beautiful promise of peace.

I now resume my function as president of the Security Council and give the floor to the President of France.