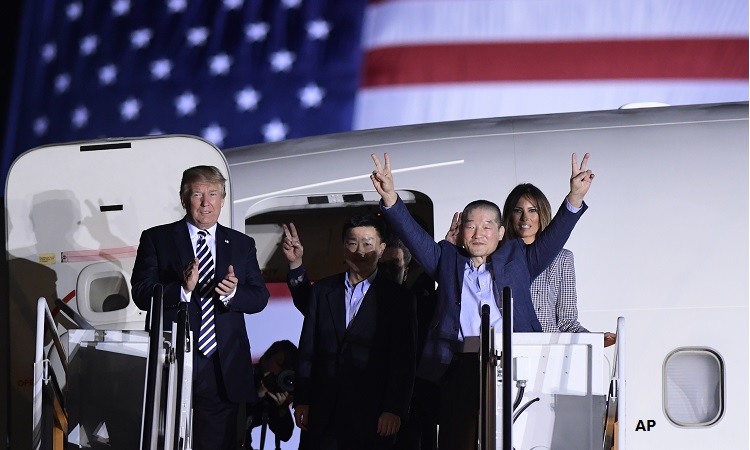 AT ARRIVAL OF AMERICANS DETAINED IN NORTH KOREA

THE PRESIDENT:  This is a great honor.  Hopefully everything is going to work out at the highest level.  We want to thank Kim Jong-un, who really was excellent to these three incredible people.  They are really three incredible people.  And the fact that we were able to get them out so soon was really a tribute to a lot of things, including a certain process that’s taking place right now.  And that process is very important.

So we will see what happens.  We have a meeting scheduled in a very short period of time.  You’ll be hearing about it soon.  We have the location set.  And we will see if we can do something that people did not think was going to happen for many, many years, and a lot of bad things could have happened in between.

So I just want to say this is a special night for these three really great people.  And congratulations on being in this country.  Thank you.

Q: How does it feel to be home?

THE PRESIDENT:  How does it feel to be home?

Q : How were you treated by North Korea?

THE PRESIDENT:  How were you treated?  You have to give them the answer.

KIM DONG-CHUL:  (As interpreted.)  Yes, we were treated in many different ways.  For me, I had to do a lot of labor.  But when I got sick, I was also treated by them.

Q: Mr. President, is this your proudest achievement?

THE PRESIDENT:  My proudest achievement will be — this is a part of it — but will be when we denuclearize that entire peninsula.  This is what people have been waiting for for a long time.  Nobody thought we could be on this track in terms of speed.

So I’m very honored to have helped the three folks.  They’re great people.  You know, I got to speak to them on the plane.  These are great people; they’ve been through a lot.  But it’s a great honor.  But the true honor is going to be if we have a victory in getting rid of nuclear weapons.

Q:Does tonight change how you will approach your meeting with Kim Jong-un?

And I must tell you, I want to pay my warmest respects to the parents of Otto Warmbier, who was a great young man who really suffered.  And his parents have become friends of ours.  They are spectacular people.  And I just want to pay my respects.  I actually called them the other day, and Mike called them, also — Mike Pence.  And they are really incredible people.

Q    Have you spoken with Kim Jong-un (inaudible)?

THE PRESIDENT:  I don’t want to comment on whether or not I spoke to him.

Q    President Trump, is this enough to tell you that Kim Jong-un is an honest broker?  Or was this just to get to the table?

THE PRESIDENT:  Well, we’re starting off on a new footing.  This is a wonderful thing that he released the folks early.  That was a big thing.  Very important to me.  And I really think we have a very good chance of doing something very meaningful.  And if anybody would have said that 5 years ago, 10 years ago, even a year ago, you would have said that’s not possible.  So a lot — I will say this: A lot of very good things have happened.

THE PRESIDENT:  Say it?

Q: Why Kim decided to free these prisoners now?

It’s never been taken this far.  There’s never been a relationship like this.  And we’re starting from here.  But I really think a lot of progress has been made.  And we’ll see what happens.  We’re talking about a few weeks.  I guess many of you will be with us.  But some great things can happen, and that’s what we hope.

So I want to thank you all.  It’s very early in the morning.  I think you probably broke the all-time, in history, television rating for three o’clock in the morning — that I would say.

But I want to just congratulate.  These are three great people, and congratulations.  (Applause.)  Thank you, everybody.  Thank you.

Q:Do you want to visit North Korea one day?

THE PRESIDENT:  It could happen.