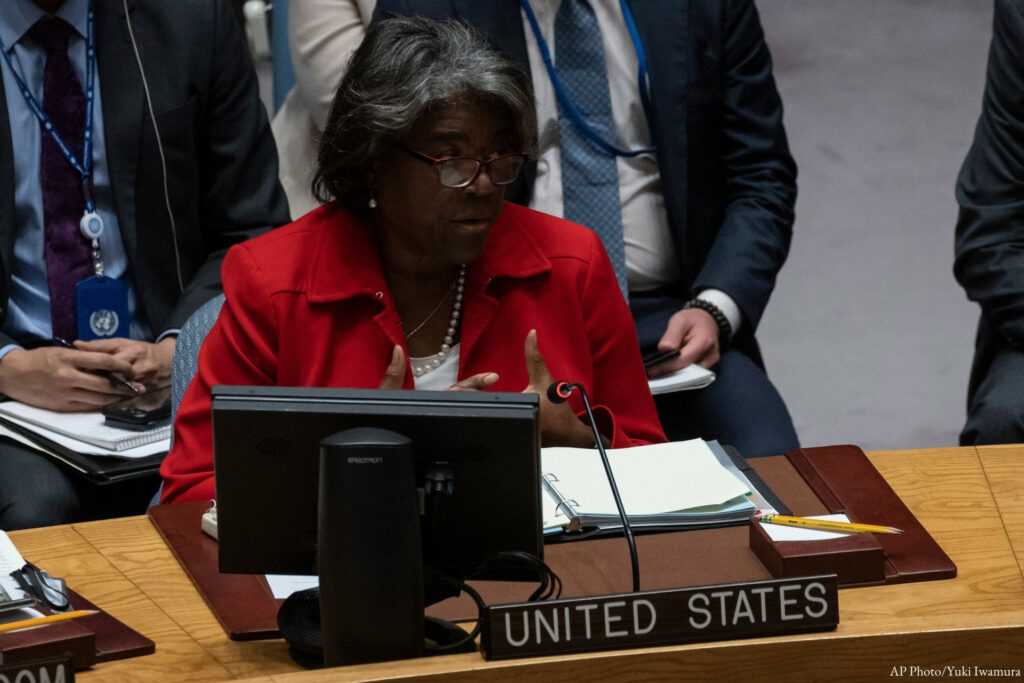 Thank you, Mr. President. And also thank you to Under-Secretary-General DiCarlo and Assistant-Secretary-General Kehris for your briefings. And thank you so much, Ms. Drik, for offering a stark and credible view on the situation from a civil society perspective.

Colleagues, I want you to imagine, for a moment, you are a parent in Mariupol. You and your partner are young and healthy. You have a 10-year-old son and a two-year-old daughter. You’re happy. You’re not particularly political, but you love your life in Ukraine. And suddenly, Russia invades.

Russian forces bomb your schools and hospitals. They destroy your peaceful city. Still, you’ve done the best to keep your family safe. You’ve huddled in shelters. You’ve tried to survive.

And one day, you and your family are trying to scrounge up some food – and you are stopped on the street by Russian forces. You are escorted, against your will, to a center to undergo filtration. You’re terrified about what happens next, because your grandmother told you stories of her friends and neighbors disappearing under the Soviet Union – and even what Russia did to its own citizens during the war in Chechnya.

You are separated from your partner and your children. Your personal biometric information is recorded. Your Ukrainian driver’s license and passports are confiscated. Your cell phone is searched for perceived anti-Russian messages.

You’re stripped of your clothes. You are interrogated. You are beaten. You hear gunfire and screams from rooms next door – others deemed more threatening are being tortured and killed.

Because you are of fighting age, you are asked to fight for Russia. When you refuse, you’re given a Russian passport and sent deep into Russia against your will, far away from your family and with no means to communicate with anyone you know or love.

This is the picture that many credible reports from diverse sources present of the so-called “filtration operations” that Russia has set up in Ukraine. We now have eye-witness testimony from victims – and increasingly detailed reporting from groups such as Human Rights Watch, the Organization for Security and Cooperation in Europe, the Yale School of Public Health’s Humanitarian Research Lab, and you’ve heard two of our briefers today share this information. Even the Russian state-managed TASS news agency has reported on the many Ukrainians who have been relocated to Russia.

At these filtration locations, Russian authorities or proxies search, they interrogate, they coerce, and reportedly sometimes torture subjects. But these horrors are not limited to the centers that have been set up – filtration may also occur at checkpoints, routine traffic stops, or on the streets.

In an interview conducted by Human Rights Watch, a man from Mariupol said he and dozens of Mariupol residents were forced to stay in a schoolhouse under filthy conditions – and that was before they even were taken to undergo filtration.

He said many got sick. He said, “We felt like hostages.”

These operations aim to identify individuals Russia deems insufficiently compliant or compatible to its control. And there is mounting and credible evidence that those considered threatening to Russian control because of perceived pro-Ukrainian leanings are “disappeared” or further detained. One eyewitness said that she overheard a Russian soldier say, “I shot at least 10 people” who had not passed filtration.

Estimates from a variety of sources, including the Russian government, indicate that Russian authorities have interrogated, detained, forcibly deported between 900,000 and 1.6 million Ukrainian citizens from their homes to Russia – often to isolated regions in the Far East.

And I want to be clear. The United States has information that officials from Russia’s Presidential Administration are overseeing and coordinating these filtration operations. And we are further aware that Russian Presidential Administration officials are providing lists of Ukrainians to be targeted for filtration, and receiving reports on the scope and the progress of operations.

Filtered. The word does not begin to convey the horror and the depravity of these pre-meditated policies. Just look at how Russia is treating Ukrainian children.

Estimates indicate that thousands of children have been subject to filtration, some separated from their families and taken from orphanages before being put up for adoption in Russia. The United States has information that over the course of July alone, more than 1,800 children were transferred from Russian-controlled areas of Ukraine to Russia.

Of course, I need not remind this Council that the forcible transfer or deportation of protected persons from occupied territories, to the territory of the occupier, is a grave breach of the Fourth Geneva Convention on the protection of civilians, and constitutes a war crime.

We should take a moment to consider the fate of those who do not pass filtration. The evidence is growing every day that thousands of Ukrainians deemed threatening due to their potential affiliation with the Ukrainian army, territorial defense forces, media, government, and civil society groups are reportedly being detained or simply disappearing.

The reason is simple: to prepare for an attempted annexation.

The goal is to change sentiments by force. To provide a fraudulent veneer of legitimacy for the Russian occupation and eventual, purported annexation of even more Ukrainian territory. This effort to fabricate these facts on the ground is the predicate to sham referenda. It is part of the Russian playbook for Ukraine that we’ve been warning Council members about since even the beginning of the war.

These referenda will attempt to create a false semblance of legality and public support, so Russia feels it can annex Kherson, Zaporizhzhya, and other regions of Ukraine. Of course, we will never recognize any efforts by Russia to change Ukraine’s borders by force. We must hold the perpetrators of these atrocities to account. We must respond as an international community – an international community that still respects the UN Charter.

We know what Russia will say about all of this. They will deny, deny, deny. But there’s a simple way to know if any of this is true. Let the United Nations in. Give the independent observers access. Give NGOs access. Allow humanitarian access. Let the world see what is going on.

As Security Council members, we are here to promote international peace and security and uphold the UN Charter. At a minimum, I hope each of us here today acknowledges that all persons subject to filtration need access to UN and humanitarian agencies as soon as possible, so that we can verify their well-being as we heard today from OHCHR. Until Russia provides that access, we will have to rely on the evidence we have accumulated and the brave testimony of survivors. The picture they paint, alongside the mounting reports, is chilling.

Colleagues, there will come a day when we are gathered in this Council to condemn the Russian Federation’s attempts to annex more of Ukraine’s territory. And I will ask that you remember what you’ve heard here today. No one – no one – will be able to say they were not warned.