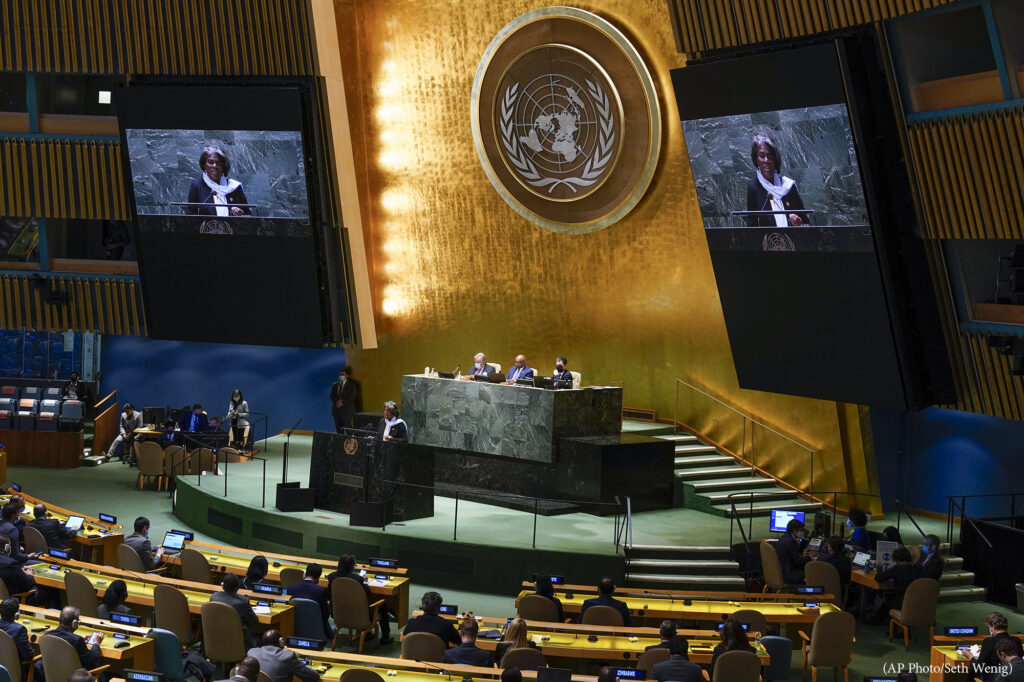 Mr. President, Mr. Secretary-General, my fellow delegates, to all those who dedicate themselves to the noble mission of this institution: Today, we call on Russia to stop its unprovoked, unjustified, unconscionable war. We call on Russia to respect the sovereignty and territorial integrity of Ukraine. We call on another neighbor of Ukraine, Belarus, who you just heard from, to stop supporting the war and stop allowing its territory to be used to facilitate this aggression. And today, we stand together in holding Russia accountable for its violations of international law, and to address the horrific human rights and humanitarian crisis unfolding before our very eyes.

This is an extraordinary moment. For the first time in 40 years, the Security Council has convened an Emergency Special Session of the General Assembly. Forty years. Most of the men and women fighting in Ukraine were not even born the last time the United Nations came together in this way to unite for peace. And I would venture, that many of the people in this room were not born when that happened. But a few of the eldest Ukrainians and Russians might recall a moment like this. A moment when one aggressive European nation invaded another, without provocation, to claim the territory of its neighbor. A moment when a European dictator declared he would return his empire to its former glory. An invasion that caused a war so horrific that it spurred this organization into existence.

Now, at more than any other point in recent history, the United Nations is being challenged. If the United Nations has any purpose, it is to prevent war, it is to condemn war, to stop war. That is our job here today. It is the job you were sent here to do – not just by your capitals, but by all of humanity.

A lot has happened very quickly to bring us to this unique moment. It was barely a week ago when, in the dead of night, President Putin launched a full-scale invasion of our fellow UN Member State at the very moment – at the very moment – the Security Council was holding an urgent meeting attempting to foster diplomacy and de-escalation. As the Security Council discussed peace, Putin declared war. Ukraine has defended itself with great courage and vigor.

As President Biden said in his State of the Union address last night, President Putin “met a wall of strength he never imagined. He met the Ukrainian people.” But the brazen and indiscriminate nature of Russia’s attacks has had devastating, horrific consequences for the entire country. Russia has bombed residential apartment buildings. It has bombed sacred burial grounds. It has shelled kindergartens and orphanages and hospitals. Russia has spurred mass hunger and caused so many to flee their homes – the latest UN estimates are marching toward a million people. We thank the countries who have opened their borders, who have opened their hearts, opened their homes to those fleeing Ukraine. And I want to echo the UN Refugee Agency’s call to help and welcome all those fleeing conflict, without regard to race or nationality. Refugees are refugees.

For those who remain, Russia is destroying critical infrastructure – vital services which provide millions of people across Ukraine with drinking water to stay alive, gas to keep people from freezing to death. And now, it appears Russia is preparing to increase the brutality of its campaign against Ukraine. * We all have seen the 40-mile-long lethal convoy charging toward Kyiv. President Putin continues to escalate – putting Russia’s nuclear forces on high alert, threatening to invade Finland and Sweden. At every step of the war, Russia has betrayed the United Nations. Russia’s actions go against everything this body stands for.

People across the world have already united together in exactly the way this General Assembly must do today. Protests and vigils against Russia’s war, and in solidarity with Ukraine, marked with blue and yellow, have sprung up across the globe. These are protests for peace. From Bangkok to Budapest. From Berlin to Buenos Aires. From Sydney to Seoul. From Calgary to Cape Town. And even in Moscow and Minsk. People everywhere are standing up to call for President Putin to stop this attack.

The Russian people are themselves asking how many lives Putin will sacrifice for his cynical ambitions. And they are appalled at the answer. To the Russian protesters, I say thank you – thank you – for your bravery. To the Russian soldiers sent to the front lines of an unjust, unnecessary war, I say: your leaders are lying to you. Do not commit war crimes. Do everything you can to put down your weapons and leave Ukraine.

The truth is that this war was one man’s choice and one man alone: President Putin. It was his choice to force hundreds of thousands of people to stuff their lives into backpacks and flee the country. To send newborn babies into makeshift bomb shelters. To make children with cancer huddle in hospital basements, interrupting their treatment, essentially sentencing them to death. Those were President Putin’s choices. Now it’s time for us to make ours.