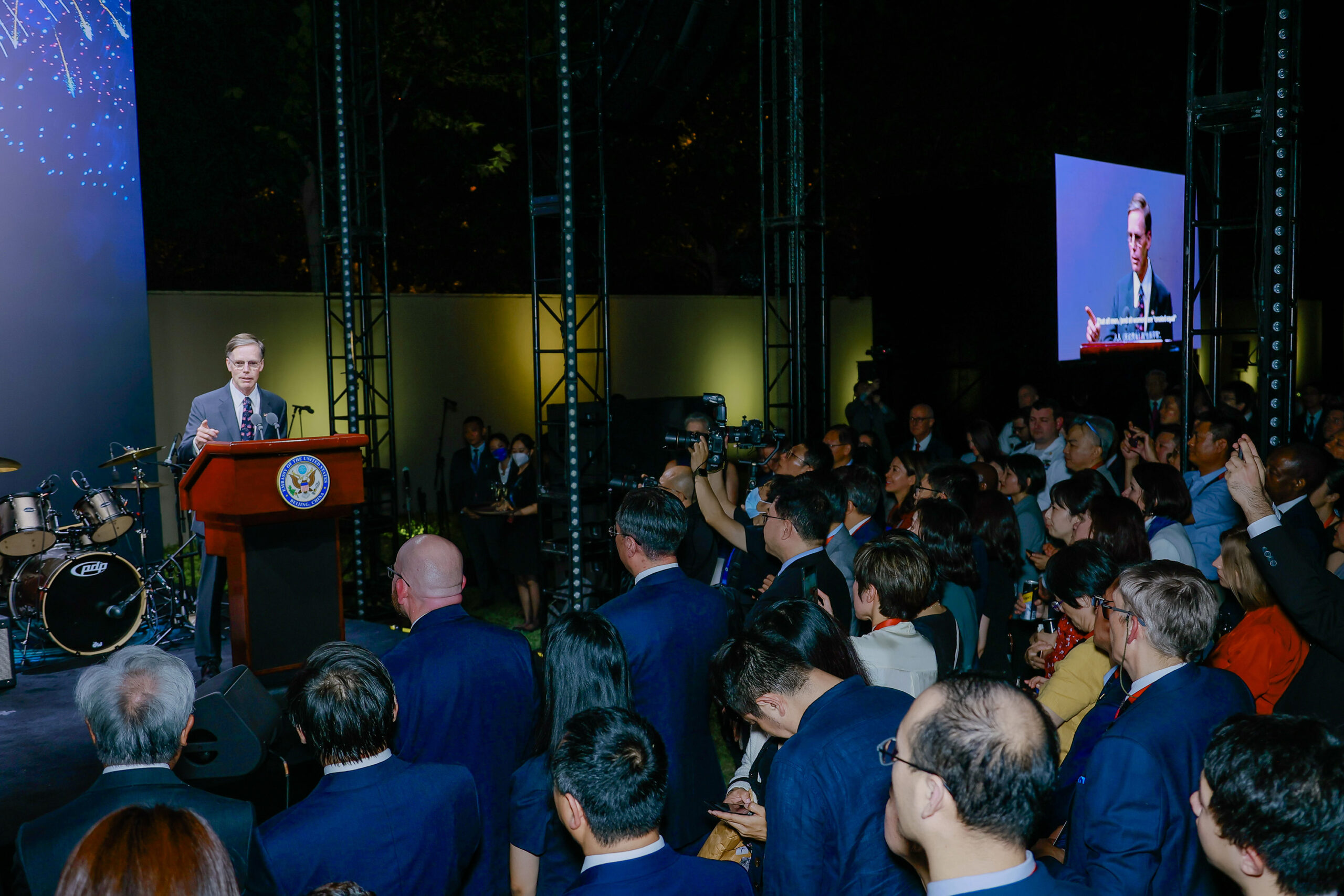 Good evening, everyone.  Thank you very much for being with us as we Americans celebrate all that we love about our country—the United States of America.

Now, some of you may be wondering:  if America’s Independence is on July 4, why are we gathered here at the U.S. Embassy in mid-September?

Well, please mark your calendars because we will celebrate Independence Day next year on July 4, 2023!

As you will remember, Covid protocols made a big party like this somewhat problematic in July this year.  September is when we also celebrate Constitution Day—the day that great document was signed and our Union was born.

The United States was founded on an idea that was revolutionary in the 18th century and remains revolutionary today—Thomas Jefferson’s words in the Declaration of Independence—that all men, (and all women), are “created equal” and that they have individual rights that are God-given, precious, and as worth defending now as they were then.

Our Founding Fathers and Mothers launched a democratic challenge that every generation for 246 years has sought to redeem—the building of “A More Perfect Union”—words from the Preamble to the Constitution.

We have learned throughout our history that America is at its best when we extend rights to people in our own society who have been denied them.

For all of our history, the rights of Native Americans have been a major part of the struggle.

The battle to end slavery and to extend rights to African Americans has been a central searing drama in American history—from the 17th century to the Civil War to this very day.

The search for equality was the driving force behind our Constitution’s 19th amendment that gave women the right to vote in 1920.

It was also behind the struggle of the Irish, like my Irish grandparents, and the Italians, Poles and Czechs, Jews from Russia, Mexicans and Central Americans, Kenyans, Nigerians, Lebanese, Indians, Filipinos, and Koreans, people from every country in Latin America, Africa, the Middle East, and Europe who came to our shores as immigrants and refugees to be treated equally as they sought to live the American Dream.

And that struggle continues to this very day for Chinese Americans, Asian Americans, Native Hawaiians, Pacific Islanders, and those Americans whose family roots are in every country of the Indo-Pacific region for a life of acceptance, inclusion, and dignity in our society.

As Americans we are proud of our achievements and understand that the struggle for equality continues.

But, we have made and must continue to make steady progress — from the Civil Rights and Voting Rights Acts of the mid-1960s to the Americans with Disabilities Act of 1990 to the struggle today for the rights of the LGBTQI+ community.

At the core of our national identity is also a deep, abiding faith in human freedom.  That ideal springs from the Declaration and the Constitution’s Bill of Rights.

We believe that all Americans, as well as people everywhere, have individual rights that no government can take away.

Freedom in The Rule of Law.

And so, on this United Nations International Day of Democracy, we are reminded that these individual rights are an essential element in a true democracy.

We formed our union 246 years ago to defend these freedoms and to advocate that they be extended to all people in all countries as they are promised and enshrined in the Universal Declaration of Human Rights.

If you travel anywhere across all 50 states on our Independence Day, you will find Americans enjoying cookouts, family reunions, baseball games and hometown parades.

Whether we are left or right, red or blue, Republican, Democrat or Independent, we Americans are united in a great commitment to and great love of our country.

Let me thank our sponsors, our Marines, and all of our Mission colleagues who made this evening’s celebration happen.

To close, let me ask Assistant Foreign Minister Xu Feihong to join me on stage.  Assistant Minister, thank you for being with us and for representing the government of the People’s Republic of China.  We appreciate your presence.

Ladies and Gentlemen, Please join me in raising a glass to toast our country, the United States of America in our 246th year.

And, before we kick things off with our very own Embassy band, Lily and the Boys, I invite you to watch another American tradition –Fireworks–that we borrowed from its actual inventors—the people of China!  Think of it as fireworks with Digital American characteristics.