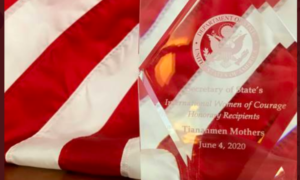 Mr. Deputy Secretary, it is an honor to be with you today.  It is my pleasure to introduce Ms. Tong Yi who joins virtually from California. Ms. Tong was one of the leading students in the Tiananmen protests of 1989.

DEPUTY SECRETARY STEPHEN BIEGUN:  Thank you, Ambassador Currie.  I’m honored to join you, Tong Yi, even if only virtually, as we recognize the Tiananmen Mothers on this important day, that around the world has come to symbolize the power of the human spirit against tyranny.

Thirty-one years ago, the Chinese Communist Party massacred hundreds in Tiananmen Square.  Those lost are remembered every year not only by the international community but by their families every day, who keep alive the memory of their loved ones.  For the families, the fate of their sons, daughters, sisters, brothers, mothers, fathers have never been acknowledged by the Chinese Communist Party and their final resting place remains unknown.

These families have demonstrated immeasurable courage in the face of tragedy and loss, and have, at great cost to their own lives, continued to advocate for holding those responsible accountable.

On this year’s anniversary, I am honored, on behalf of the Department of State, to recognize the courageous mothers of these victims, known as “The Tiananmen Mothers,” who have dedicated their lives to unmasking the CCP and seeking justice for the fallen.  What began as one mother who is now 83 years old and essentially under house arrest by the CCP, seeking the truth about her son, grew to a collective appeal to hundreds of mothers still seeking answers.

These Mothers have stood up against the CCP for more than three decades to bring the truth to light. And despite efforts by the Chinese government to silence their voices, they have only grown louder, joined by a growing chorus from around the world.

Today, it is my great honor to present the Tiananmen Mothers this honorary International Women of Courage award on behalf of all the Tiananmen Mothers. Their courage to stand for what is right, what is decent, what is just, is a testament to us all. Ambassador Currie and I are honored to recognize their decades-long efforts to seek justice through their grief. Thank you, Tong Yi, for receiving this award on their behalf, and I hope you will say a few words.

I am honored and humbled that you have asked me to receive this special award on behalf of the Tiananmen Mothers.  Many others, constrained by their presence inside China, would be more qualified than I.

I was a protester at Tiananmen in 1989 and a witness to the massacre.  I also did my best, during the early 1990s, to help family members of some of the victims to get in touch with Professor Ding Zilin and the Tiananmen Mothers.  This work involved helping people to overcome fear.  It was a justified fear, because the government was still viewing the dead and wounded not as victims but as criminals.

Around this very hour thirty-one years ago, I was standing with crowds of Beijing people near Fuxingmen, about two miles west of Tiananmen Square. We could hear machine-gun fire approaching from locations that were still farther west.  In an effort to block the approach, citizens where I was had placed articulated buses across the road and set them ablaze. Shortly after midnight, the army’s frontline troops arrived and began removing the burning buses.  The tanks arrived and soldiers fired at random into the angry crowds.  Two people a few feet away from me fell.  Passing motorists stopped, picked them up, and rushed to hospitals.  I have never known what happened to those two who fell.

But the fate of a certain 17-year old named Jiang Jielian is well-known.  About an hour earlier, to the west along that same avenue of death, Jiang said to a classmate, “I think I’ve been hit.” Then he collapsed and never stood again. He was the son of Ding Zilin, and the main reason why the good professor, at great risk to herself, began speaking out and organizing others who had lost family members in the massacre. This was the birth of the Tiananmen Mothers, a group that eventually came to number several hundred. From then until now, year after year, and in the face of unrelenting government surveillance and harassment, The Tiananmen Mothers have called for the right to mourn their dead publicly and to receive and distribute humanitarian aid.  They have called for ending persecution of victims’ families, for releasing all people imprisoned for reasons related to the 1989 protests, and, not least, for a full public accounting for the massacre.

The Chinese Communist Party and its government have never responded to their demands. With the ascension to power of Xi Jinping, the repression of the Mothers has become even worse than before.

As time passes, their numbers have dwindled. Prof. Ding’s husband died in 2015. In a handwritten letter to me dated January 30, 2018, she wrote that she plans simply to stay home for her remaining years. She is known in her apartment building as the only one who has “special protection” twenty-four hours a day. Her letter also contains these lines:

“Thank you for thinking of me. You remind me that I have a duty to let people who care about me know that I am still alive.”

“I no longer expect, in the years that are left to me, to attain justice for the lost souls of Tiananmen. I did my best, but did not make it.”

“My only hope is to live in dignity and to die with dignity.  Two years ago, I did everything I could to help my husband depart in dignity.  From now on, my fate is in the hands of Heaven.”

The CCP is hoping that The Tiananmen Mothers will gradually die off and be forgotten. But is that possible? I doubt it. Today, on the 31st anniversary of the massacre, this special award helps to continue and to strengthen memory—both of the lost souls of 1989 and of the cause of freedom and democracy for which they gave their lives.