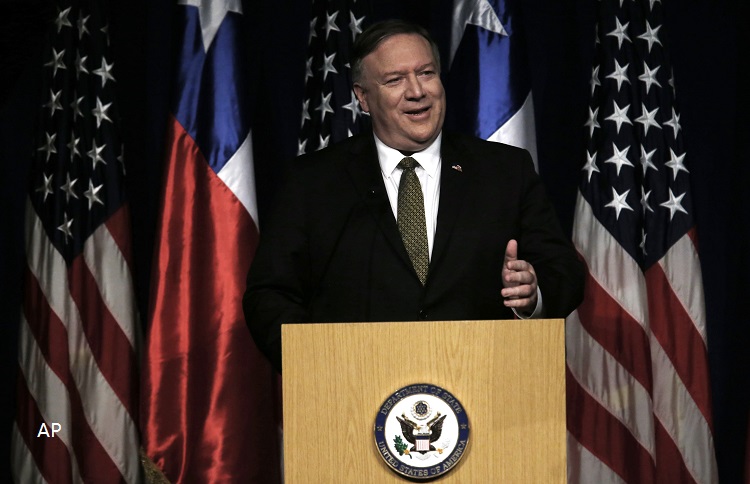 The Trump administration believes that our two nations and the rest of the Americas have an incredible opportunity, the chance truly to cement a future of democracy, prosperity for all of the people of all of this hemisphere. It’s not an impossible dream, although a few years ago we might not have believed it. Today we all can. Nor is it a forgone conclusion that it will take place. We’ll have work to do. But the chance is ours collectively to seize or to squander.

Just look, just look at the once unthinkable changes that have taken place in Chile and other countries. Chile made the transition peacefully to a democratic nation and embraced competition, free markets, and capitalism. Chile champions transparency. Chile is a leader in the role – Chileans did all of that.

Many countries, many countries on this continent, are following Chile’s example. A generation ago, many South American countries were military dictatorships.

And even after those regimes ended, many of the continent’s democracies were saddled with corrupt leadership.

Well, that’s no longer the case.

Elsewhere, President Trump has praised what he called a “new day” in Latin America, and he has shown that he means it by leading the way on trade for all of us.

If you’ve been listening recently, you have watched the Trump administration speak quite a bit about the risks that China presents.

Make no mistake, China is an important trade partner for Chile, for the United States as well. President Trump’s been working hard to make sure our trade with China is fair and reciprocal. But you should know there is a problem.

The problem, though, is when China does business in places like Latin America, it often injects corrosive capital into the economic bloodstream, giving life to corruption and eroding good governance.

You saw this quite clearly here in the region at the Coca Codo Sinclair dam in the jungles of Ecuador. (Inaudible) and built by – excuse me – built by China under a previous administration, the dam was supposed to solve Ecuador’s energy needs and help save the country and keep them out of poverty.

But of course we know how this story ends. The dam now runs to half capacity. The steel used to make it is full of cracks and there are accidents. Nearly every top official that was involved in the dam’s construction is either imprisoned or sentenced on bribery charges.

It was the Ecuadorian energy minister who put it quite bluntly. He said, quote, “The strategy of China is clear. They take economic control of countries.” We’re glad, indeed we’re thrilled, that President Moreno’s administration has taken swift action to convict those responsible for doing so much harm to their own people.

Also consider Venezuela. I spoke with President Pinera at length about this today. China’s bankrolling of the Maduro regime helped precipitate and prolong the crisis in that country. China invested over $60 billion – $60 billion – with no strings attached. Well, it’s no surprise that Maduro used the money to use for tasks like paying off cronies, crushing pro-democracy activists, and funding ineffective social programs. And you all know, better than anyone in America could know, the crushing, devastating results of that.

I think there’s a lesson, a lesson to be learned for all of us: China and others are being hypocritical calling for non-intervention in Venezuela’s affairs. Their own financial interventions have helped destroy that country.

But the good news is, the good news for all of us, is that South American countries are pushing back against this external meddling. The Inter-American Development Bank, celebrating its 60th anniversary, canceled its meeting in Chengdu. It did this – it did this for the basic reason that China had refused to grant a visa to Venezuelan Juan Guido’s official representative.

And the Lima Group countries – I cannot say enough about how they have stood up. They’re seeing Russia and Cuba for what they truly are. They were opposed to China’s efforts at the United Nations to protect Maduro in Venezuela.

Another great example in Chile, along with Colombia: Each of you helped launch a new regional integration forum called Prosur.

Free of both bureaucracy and inflexible ideology, it will facilitate cooperation in areas of infrastructure and healthcare and management of natural disasters. This is an important step for this region.

South America has truly become more clear-eyed and more wary of its pretended friends. China, Russia – they’re showing up at the doorstep, but once they enter the house, we know the debt traps. They will use debt traps, they will disregard rules, and they will spread disorder in your home. Thankfully, you all, South America, is not buying it. You should know that the United States will stand behind you.