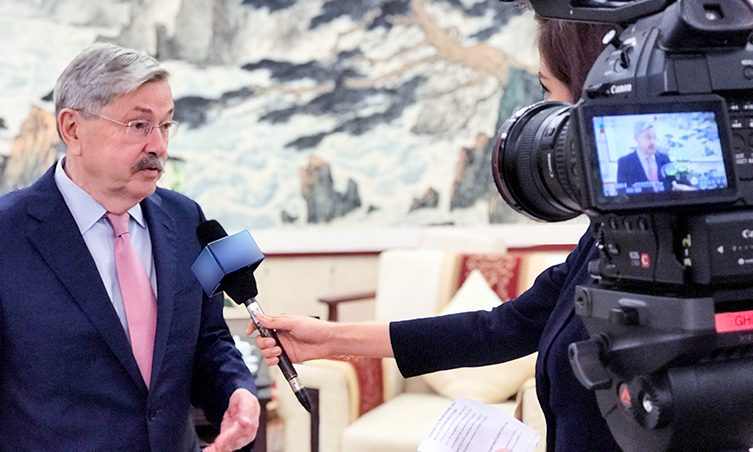 Images and words in the news capture our attention and shape our understanding of the world.  The photo of a scientist engaged in groundbreaking research.  The sharply-worded headline explaining a breaking news story.  The moment two presidents meet and shake hands, beamed around the world for their citizens to witness.  Like sunlight, good journalism clarifies, illuminates, and informs society.  On Press Freedom Day, we reflect on how important it is to protect this fundamental right for the benefit of all.

As Ambassador to China, I benefit from the dedication of journalists, both American and Chinese.  I have enjoyed my interactions with journalists in Beijing and across the country.  They work hard, often under difficult conditions.  Their task is critical, reporting on the U.S.-China relationship, the most important bilateral relationship in the world.

Americans value journalists.  Joseph Pulitzer, the famous American media leader who created the Pulitzer prize, called journalism, “A noble profession and one of unequaled importance for its influence upon the minds and morals of the people.”

America’s founding fathers recognized the power of journalism.  So they decided to protect it against interference.  The very first line of our Constitution’s bill of rights forbids the government from limiting freedom of the press.

The results have been remarkable.  For over two hundred years, journalists have channeled society’s robust debates in America and in most parts of the world.  The winner of these debates is always the people.  Of course, as with any debate—especially one with so many voices—there is bound to be disagreement and dissatisfaction.  The important point is this: as long as the public conversation stays open, the citizens get a full picture of the story, which they can evaluate and judge for themselves.

The birth of investigative journalism in the early 20th century provides a fascinating example of how this principle plays out.  In 1902, Ira Tarbell, a young female journalists, wrote a set of magazine articles revealing that John D. Rockefeller Sr.—one of the wealthiest and most powerful Americans of his age—had engaged in decades of illegal monopolistic business practices.  His company overcharged millions of American consumers for gasoline and other common goods.  Ira’s reporting unveiled these abuses to the public, leading to the breakup of the company by government regulators.  Along the way, many people warned Ira against raising the ire of the powerful Rockefeller family, yet this journalist bravely did her job, researching and publishing the truth, thereby helping her fellow Americans root out and resolve a serious social problem.

Like Ira, generations of journalists have continued to help citizens understand the issues we face.  For journalism’s role in society to function, it is imperative for journalists to be free from undue influence, and, like Ira, report the facts.  On Press Freedom Day, let us all take a moment to commend the efforts of journalists in both the United States and China.