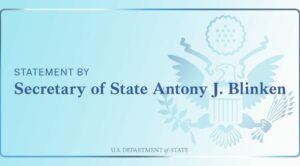 The United States condemns the People’s Republic of China’s (PRC) sanctions on a former U.S. Commission on International Religious Freedom (USCIRF) commissioner.  These sanctions follow the PRC’s March retaliatory sanctions against two USCIRF commissioners as well as Canadian, UK, and European officials, academics, and organizations.  Those were implemented immediately after parallel sanctions announcements from the United States, Canada, UK, and the EU in response to serious human rights abuses against members of ethnic and religious minority groups in Xinjiang.

Beijing’s attempts to intimidate and silence those speaking out for human rights and fundamental freedoms, including freedom of religion or belief, only draw additional international attention and scrutiny to its egregious abuses.  This includes the ongoing crimes against humanity and genocide in Xinjiang, as well as its repression of religious and spiritual adherents, including Tibetan Buddhists, Christians, and Falun Gong practitioners.  The United States will continue to speak out for human rights, including those enshrined in the Universal Declaration of Human Rights, and promote accountability for the PRC government’s abuses.