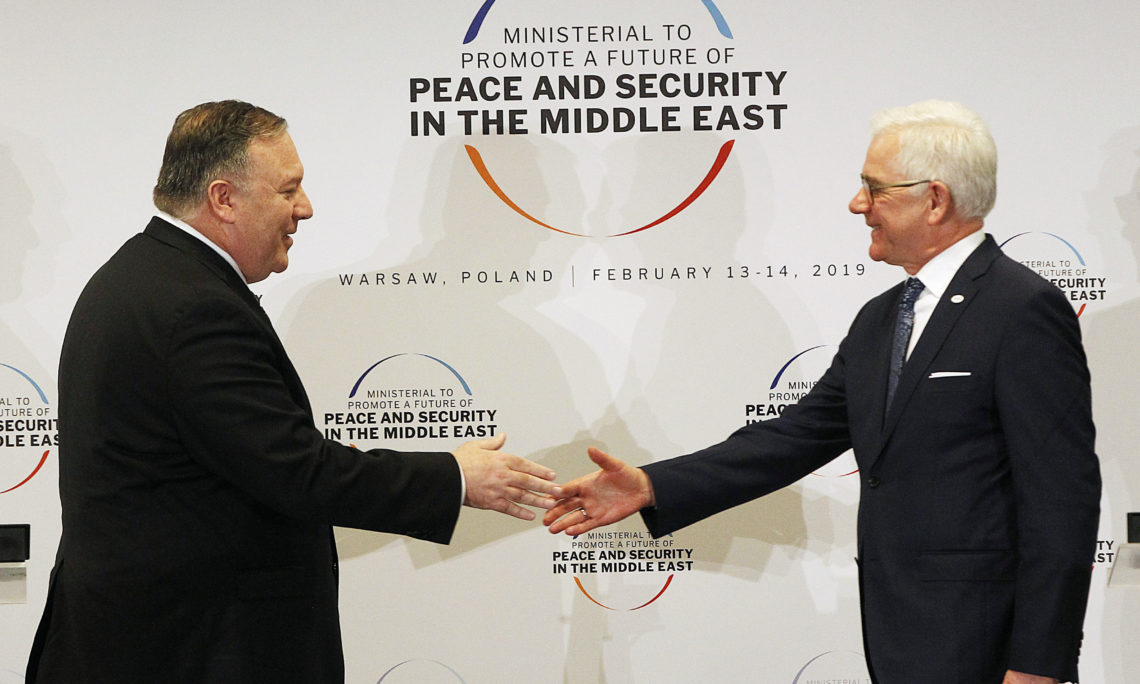 (CNN)Solidarity is once again popular in Poland — though not in the way you might think. The concept that gave a name to the anti-communist movement in the 1980s now characterizes the strong partnership between Poland and the United States. And solidarity is what we seek from all countries this week in Warsaw, as we co-host the Ministerial to Promote a Future of Peace and Security in the Middle East. Our goal is to forge stronger partnerships and advance our common security goals in a region riddled by conflict.

This meeting — bringing together more than 60 nations and representatives from the European Union and NATO — is historic for showing our seriousness and unity of purpose. We will discuss violent instability in Syria and Yemen, as well as efforts to achieve a peace agreement between Israel and the Palestinians. Further sessions will feature discussions on missile proliferation, energy security, emerging cyber-based threats, counterterrorism, and humanitarian aid. Our broad goal is to hear every nation’s unscripted, candid ideas for how to make progress on these issues, and more. As our fellow foreign ministers know, multilateral meetings are often pro-forma exercises in giving prepared statements. Not this one. Our hope is that real conversations will drive real action.
We expect each nation to express opinions that reflect its own interests. Disagreements in one area should not prohibit unity in others. In the past, for example, our two nations have taken distinct positions on the Iran nuclear deal. Despite these strong differences of opinion, the US-Poland relationship remains strong. This cooperation is a model for what we hope all countries attending the Ministerial will commit to. Establishing a consensus on many — and perhaps most — issues is more than possible.

There is already precedent for broad cooperation on Middle East security. Last week, 79 partners of the Global Coalition to Defeat ISIS met in Washington. Our incredible efforts — which have brought the ISIS territorial caliphate to the brink of total defeat — are a testament to how much nations of goodwill can achieve together. France and Britain have conducted air strikes; Jordan and Turkey have hosted Syrian refugees; Gulf countries have contributed generously toward stabilization efforts. Every nation has played a part, and our collective efforts have virtually destroyed the caliphate and allowed displaced people to return to their homes.

Those efforts, along with the inspiring history of cooperation between our two nations, act as our guide. It was exactly one hundred years ago that Poland and the United States formally established diplomatic relations when American diplomat Hugh Gibson set up a makeshift embassy inside Warsaw’s Bristol Hotel. Well before that, Tadeusz Kościuszko — whom Thomas Jefferson called “as pure a son of liberty as I have ever known” — lent a hand in designing military fortifications, like the ones at West Point, during the American Revolution. And one of his Polish compatriots, Casimir Pulaski — the father of the American cavalry — saved the life of George Washington during the Battle of Brandywine.

The United States and Poland seek to live up to these examples which history has bequeathed. Our times demand it. President Trump stressed in Warsaw two years ago that establishing security in our world “is not just a commitment of money, it is a commitment of will.” As those words suggest, the best way to achieve peace and security in the Middle East is for every nation to exert itself. In bringing nations together for that purpose, we are rallying the world to a new solidarity.