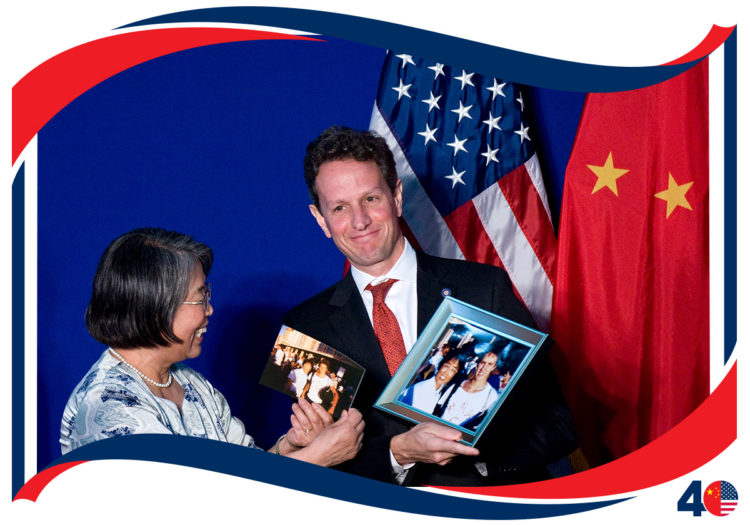 U.S. Treasury Secretary Timothy Geithner traveled to Beijing #OnThisDay 1 June 2009 and reconnected with his former teacher.  Secretary Geithner attended University in Beijing in 1981 and 1982.  Here he is holding a photo of himself with his teacher during his college years. (AP Images) 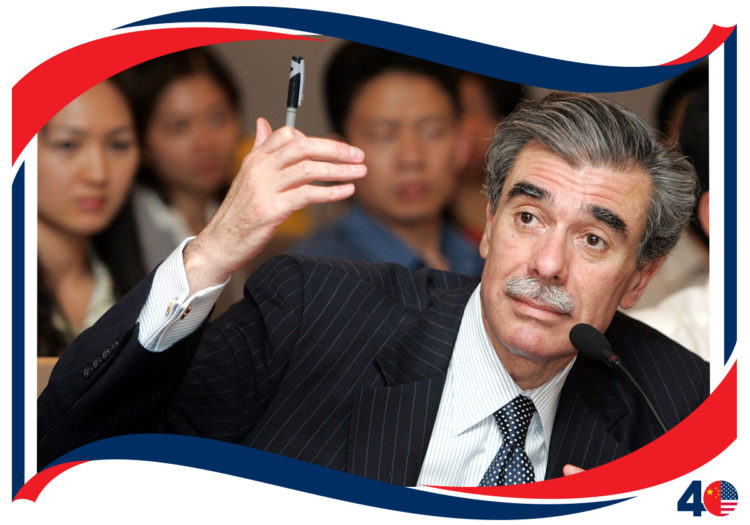 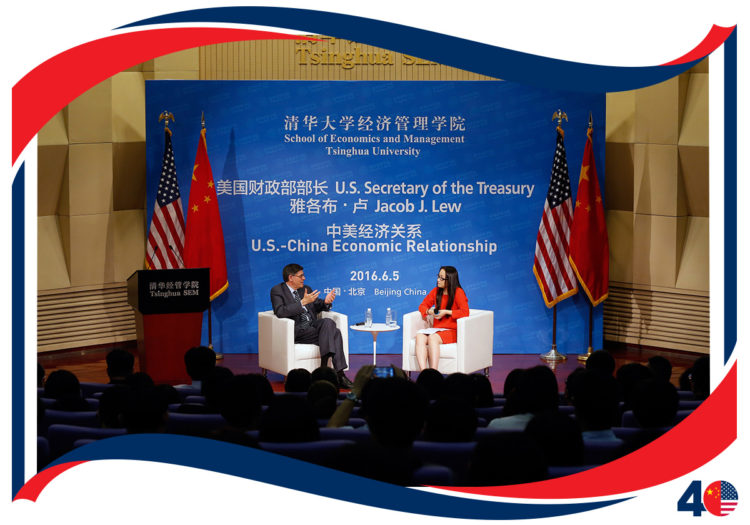 U.S. Treasury Secretary Jacob Lew took the stage in a discussion on U.S.-China economic relations at Tsinghua University  #OnThisDay 5 June 2016.  As with many visiting U.S. officials, Lew—in Beijing for meetings with Chinese government officials—took the opportunity to engage with Chinese students.  (AP Images) 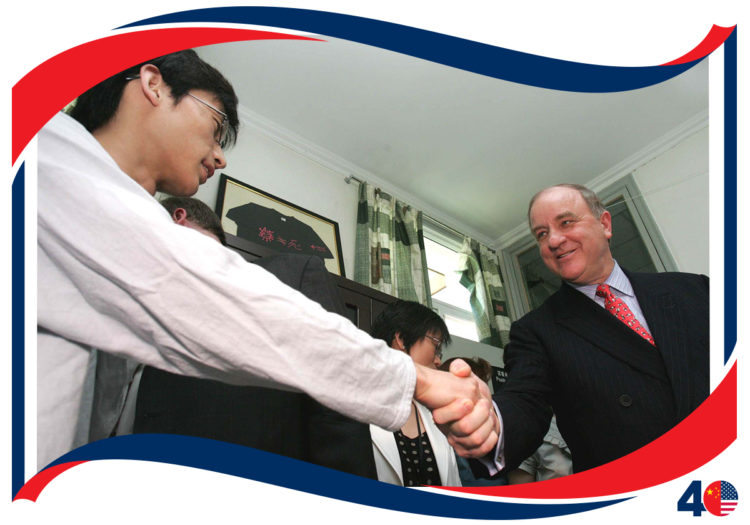 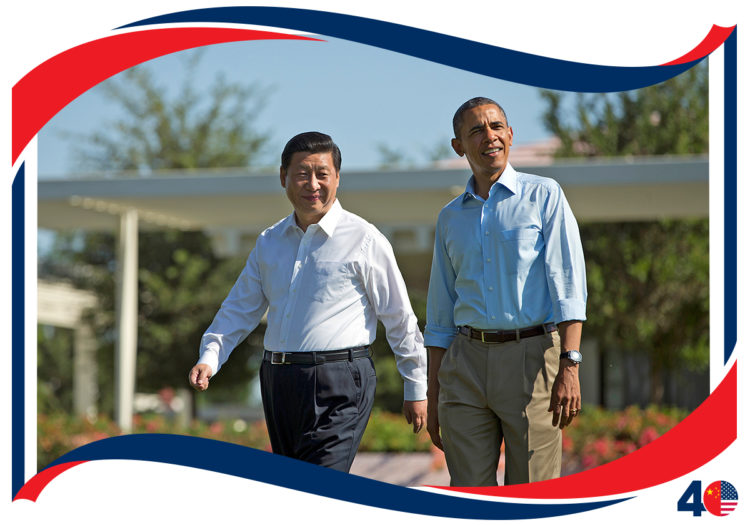 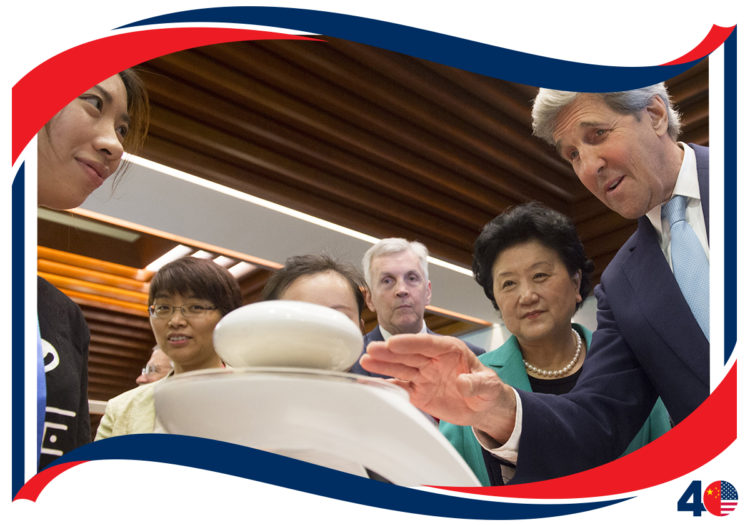 As part of the US – China High Level Consultation on People to People Exchange, U.S. Secretary of State John Kerry, and China Vice Premier Liu Yandong watch a demonstration of magnetic levitation  #OnThisDay 7 June, 2016 at the National Museum in Beijing, China.  Later, they sign soccer balls as they greet the Beijing Normal University women’s soccer team and the Duke University women’s soccer team as part of the same exchange. 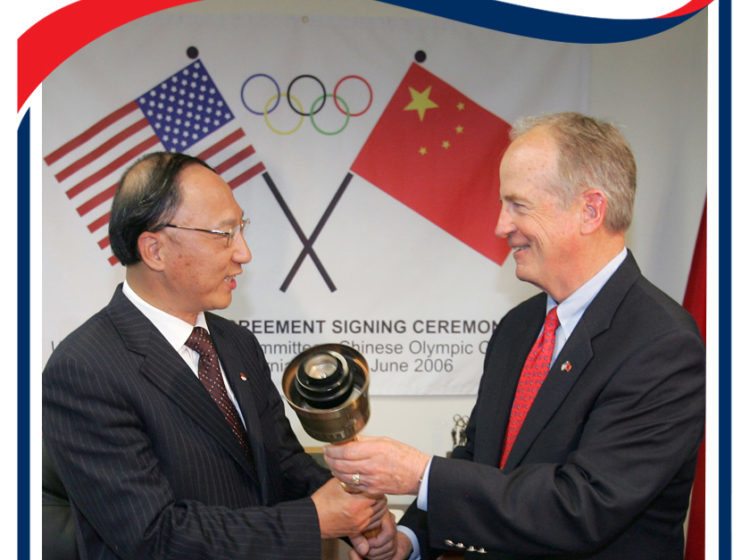 Chairman of the U.S. Olympic Committee, Peter Ueberroth gives a torch from the 1984 Olympics to Liu Peng, president of the Chinese Olympic Committee, #OnThisDay June 9, 2006, in Irvine, California.  The two signed a document to increase athlete and coaching exchanges as well as anti-doping cooperation between the U.S. and China in the run-up to the 2008 Beijing Games.(AP Images) 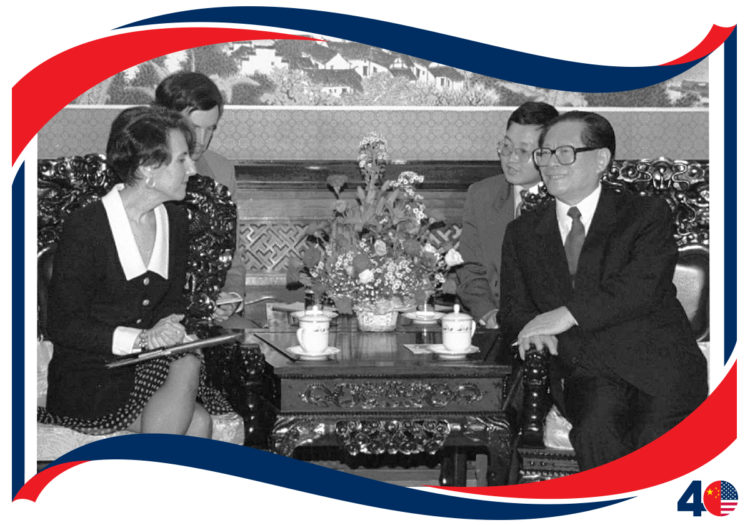 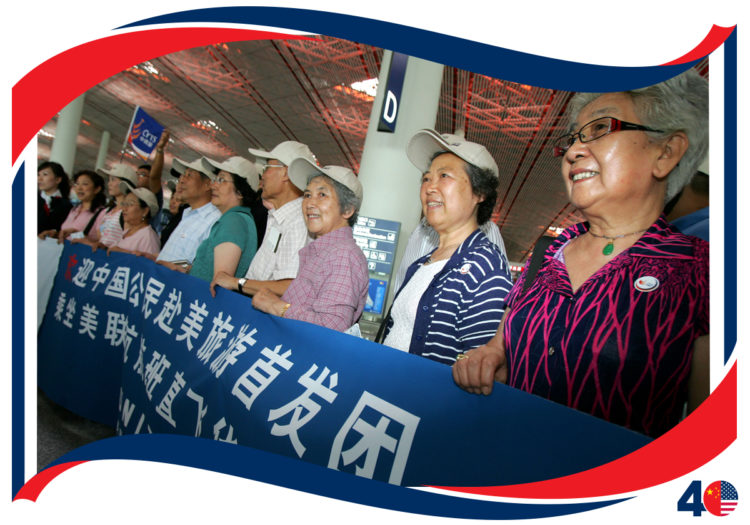 The first tour group from mainland China to take part in the Approved Destination Status program flew to the U.S. #OnThisDay 17 June 2008.  This program improved connections between Chinese travel agencies and U.S. tourism destinations so Chinese citizens could travel to even more American destination.  After the picture, the group boarded their flight to Washington D.C., the U.S. capital.(AP Images) 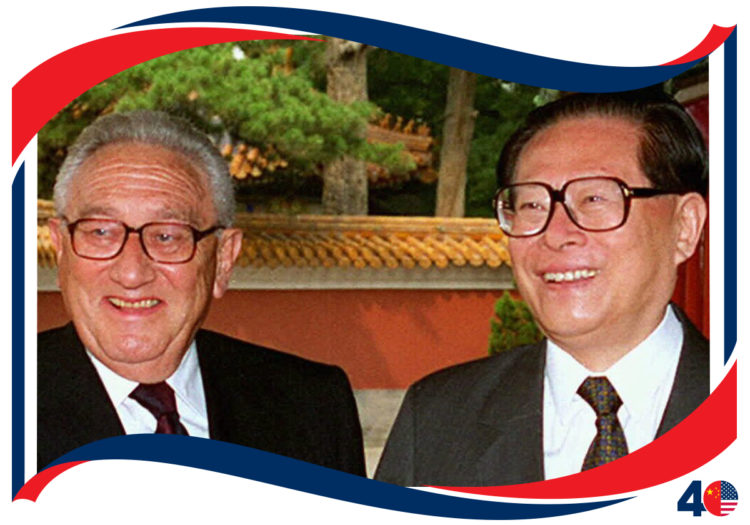 Former U.S. Secretary of State Henry Kissinger poses with Chinese President Jiang Zemin in Beijing #OnThisDay June 18, 1997.  Famous for his work on the establishment of U.S.-China relations, Kissinger continues to travel to China even today, and he shares his thoughts on the relationship in this video.(AP Images) 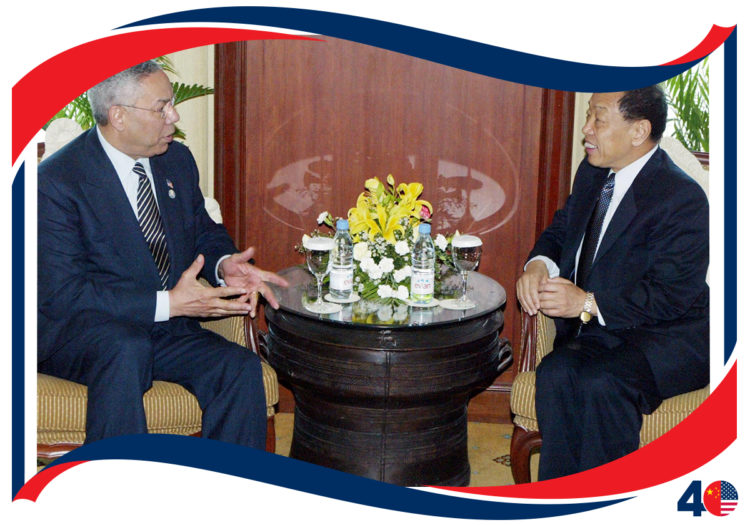 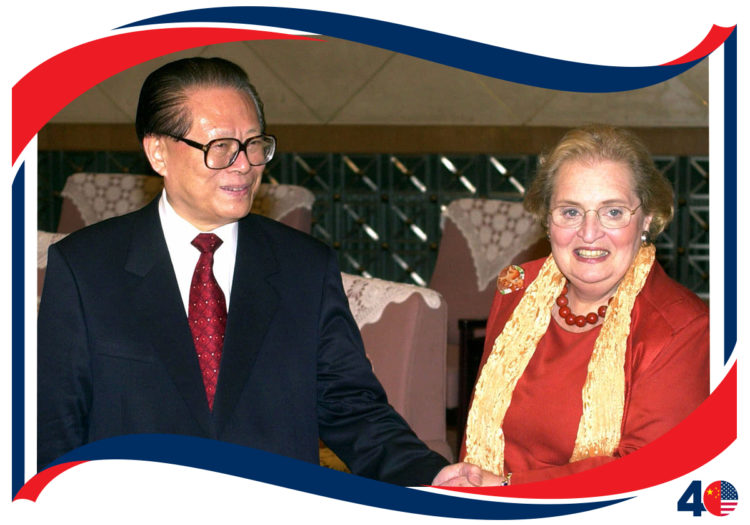 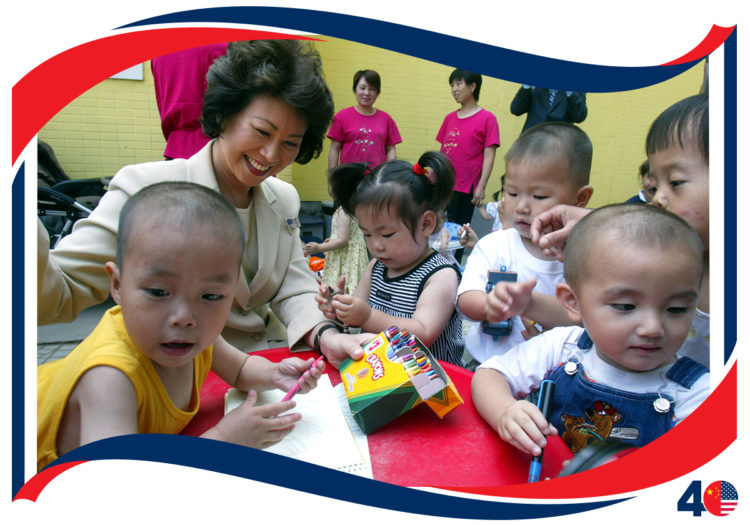 US Labor Secretary Elaine Chao meets orphans at the House of Love, part of the Lang Fang Children’s village near Beijing, #OnThisDay June 23, 2004.  Chao was in Beijing to discuss labor issues with Chinese officials and visited the orphanage to deliver gifts of toys and books.  The Lang Fang Children’s Village takes care of children who have been abandoned and many have birth defects such as heart disease, cleft lips and clubbed feet.(AP Images) 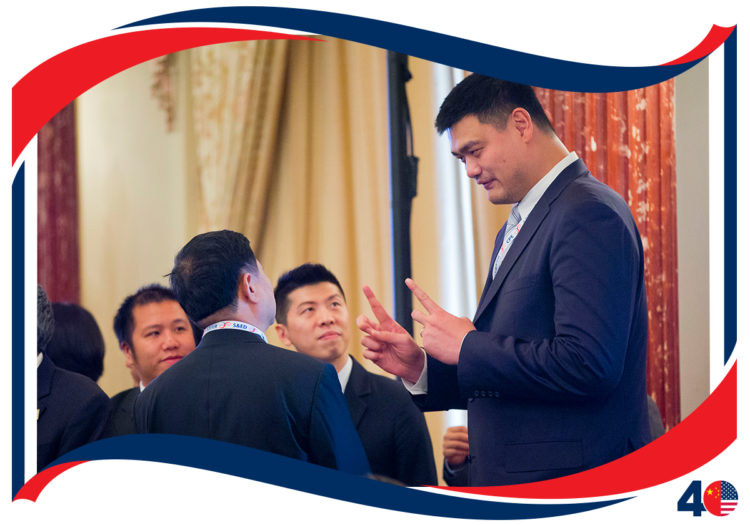 Yao Ming, former NBA star with the Houston Rockets, talks with guests at the Plenary Session of the US China Consultation on People-to-People (CPE) #OnThisDay June 24, 2015, at the State Department in Washington.  The CPE was a dialog that allowed U.S. and Chinese governments to regularly facilitate people-to-people exchanges, a cornerstone of public diplomacy between the U.S. and China since the establishment of diplomatic relations in 1979.(AP Images) 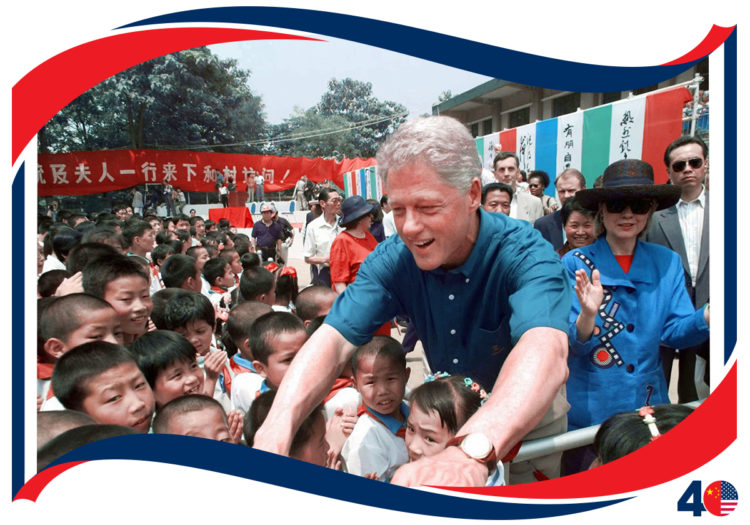 President Clinton greets students at a school in Xia He, China following a speech #OnThisDay June 26, 1998.  Clinton held a roundtable discussion with villagers from Xia He earlier in the day. (AP Images) 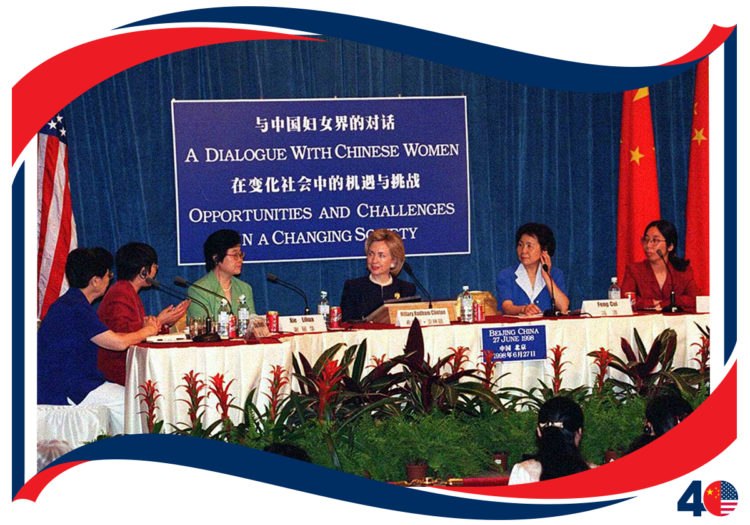 First Lady Hillary Rodham Clinton attended a seminar on “Opportunity and Challenge in a Changing Society” and participated in a dialogue with Chinese women in Beijing #OnThisDay June 27, 1998.  The seminar was sponsored by All-China Womens Federation in Beijing. 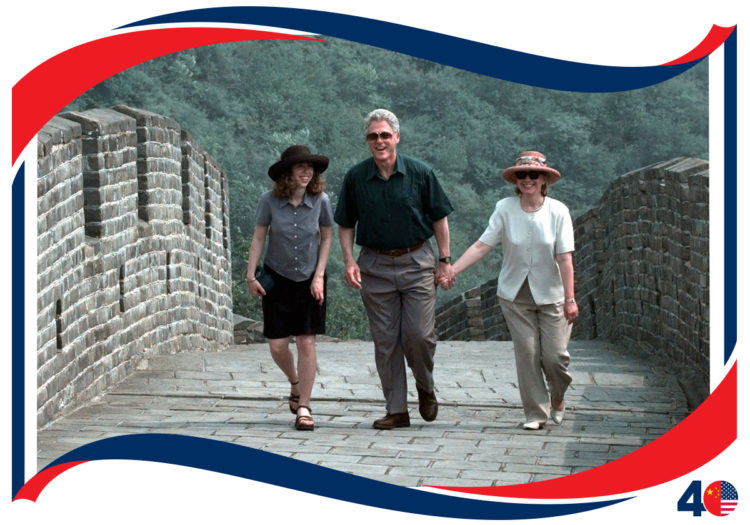 U.S. President Bill Clinton, first Lady Hillary Rodham Clinton, and daughter Chelsea laugh as they stroll along a section of the Great Wall of China in Mutianyu #OnThisDay June 28, 1998.  The Clinton’s also visited the Forbidden City in Beijing earlier in the day. 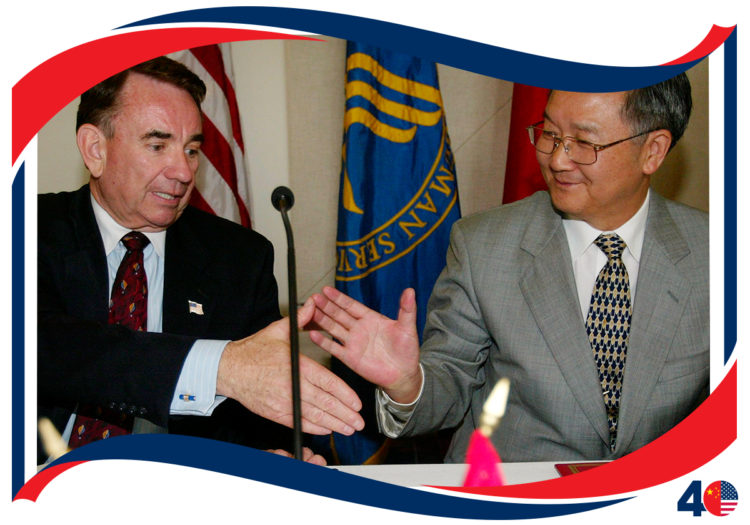 China and the U.S. joined forces in the global fight against AIDS #OnThisDay in 2002.  Secretary of Health and Human Services Tommy Thompson, shakes hands with Chinese Minister of Health Zhang Wenkang before signing a memorandum of understanding on US. – China cooperation on HIV/AIDS prevention and research in Washington on June 28. 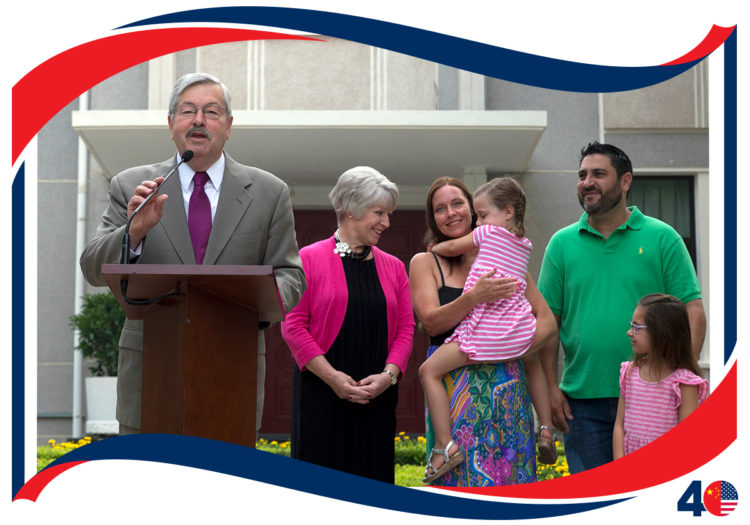 Two years ago #OnThisDay U.S. Ambassador to China Terry Branstad made his first public appearance as the new U.S. ambassador in Beijing.  With his family looking on, Ambassador Branstad spoke of longstanding friendship with Chinese President Xi Jinping, whom he first met over 30 years ago in his home state of Iowa.  A year later, he had this to say about his time in China. 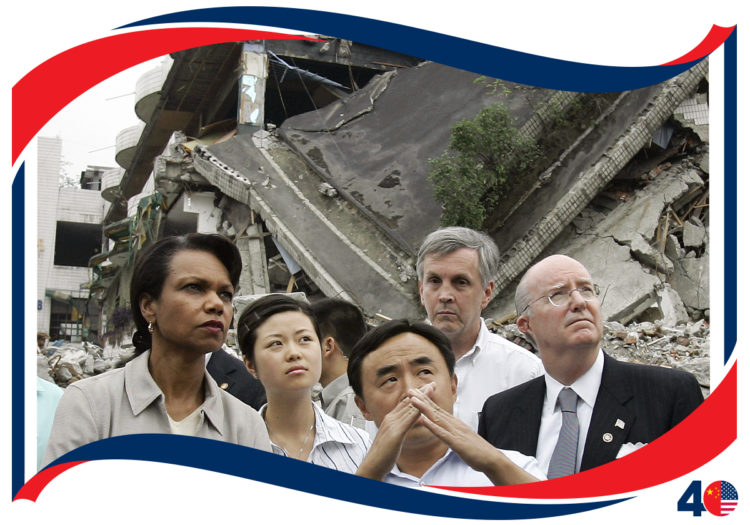 U.S. Secretary of State Condoleezza Rice accompanied Chinese officials on a visit to the collapsed Tengda Physical Club, a casualty of the 2008 Sichuan earthquake.  Rice praised China’s post-earthquake recovery efforts during her visit to the disaster zone #OnThisDay 29 June 2008.