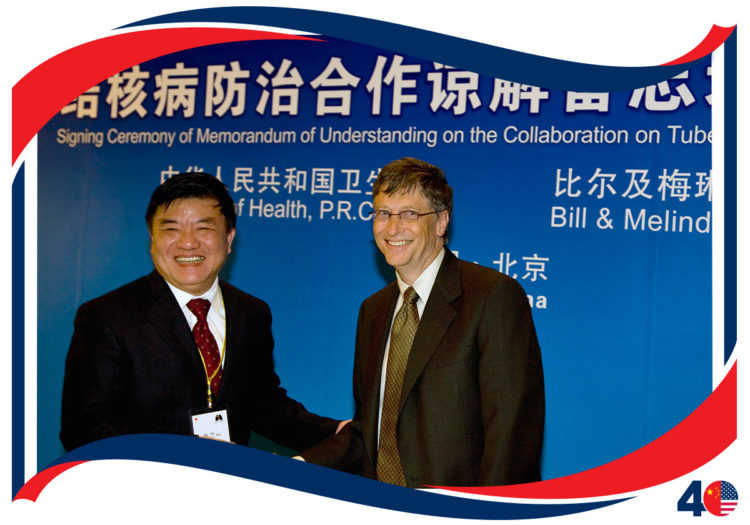 Chen Zhu, center left, Minister of Health of China, shakes hands with Bill Gates at a signing ceremony for the memorandum of understanding on the collaboration on tuberculosis prevention and treatment in Beijing #OnThisDay, 1 April 2009.  Bill Gates announced a US$33 million grant from his charity foundation to help fight tuberculosis in China by offering new tests and treatments for TB.  (AP Images) 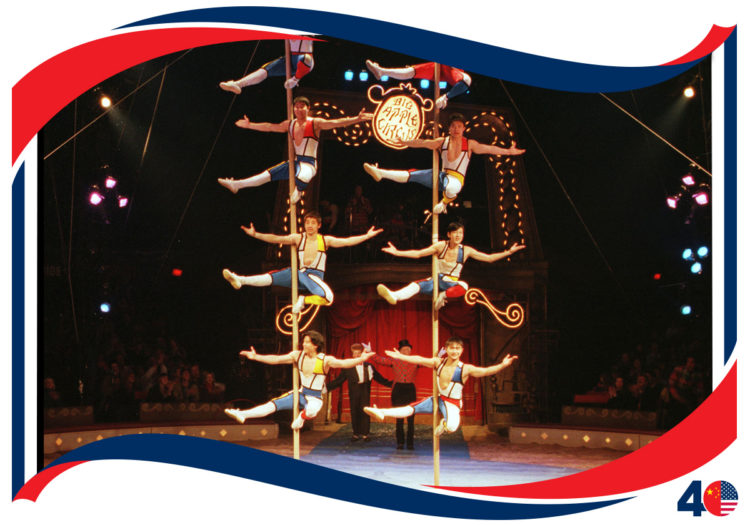 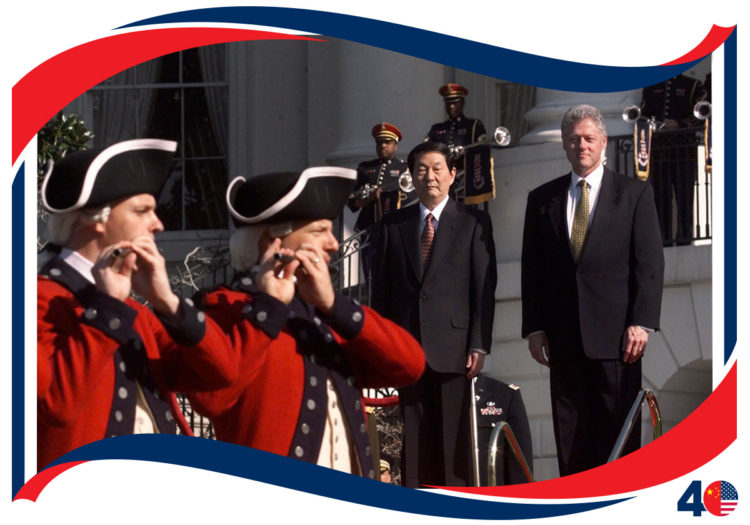 From April 4 to 14, 1999, Chinese Premier Zhu Rongji paid an official visit to the U.S. at the invitation of U.S. President Bill Clinton.  Premier Zhu Rongji and President Clinton held lengthy discussions about U.S.-China relations and international and regional issues of mutual interest.  Premier Zhu toured around the United States for nine days, enjoying visits with a cross section of Americans.  (AP Images) 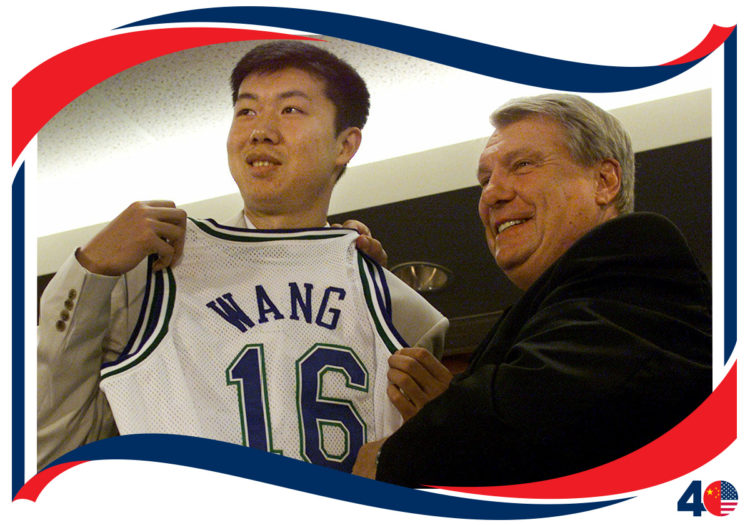 Wang Zhizhi poses with his new jersey in Texas #OnThisDay, 4 April 2001, as he becomes the first Chinese player in NBA History. (AP Images) 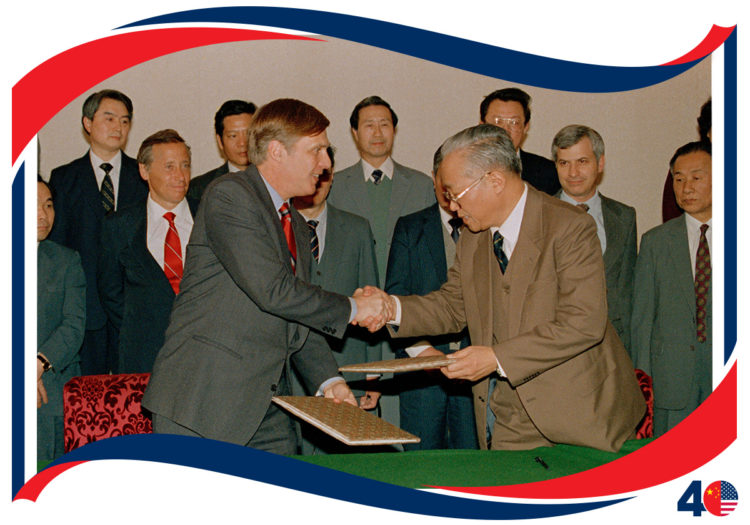 U.S. Ambassador Winston Lord, left, shakes hands with Ge Shouqin, secretary general of the China Education Association for International Exchanges after they sign an agreement between the Peace Corps and China #OnThisDay, 5 April 1989. The Peace Corps is a U.S. Government program that sends young Americans around the world to provide volunteer assistance to those in need. (AP Images) 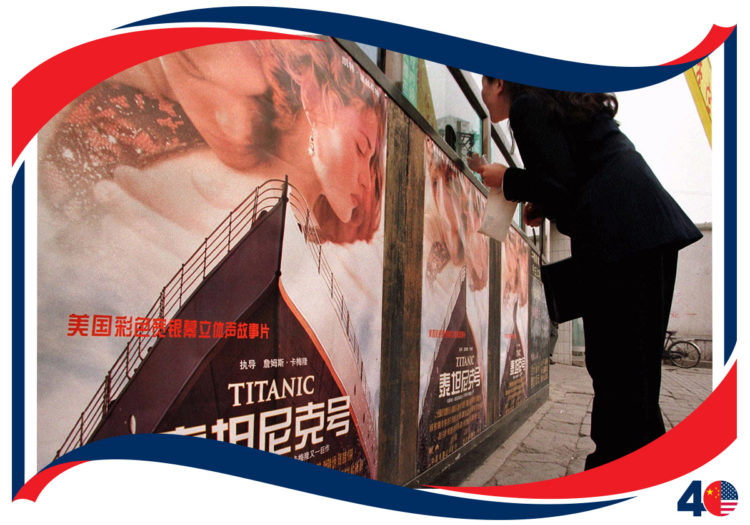 A Chinese woman buys tickets to the movie “Titanic” at a Beijing theater #OnThisDay, 9 April 1998.  The movie caught the attention of Chinese President Jiang Zemin, who watched it and then mentioned it at a public event.  Chinese people liked it as well, as it earned one million Yuan in its first three days in Beijing and 7 million Yuan in its first five days in Shanghai.  Hollywood movies have been a mainstay of Chinese theaters for decades. (AP Images) 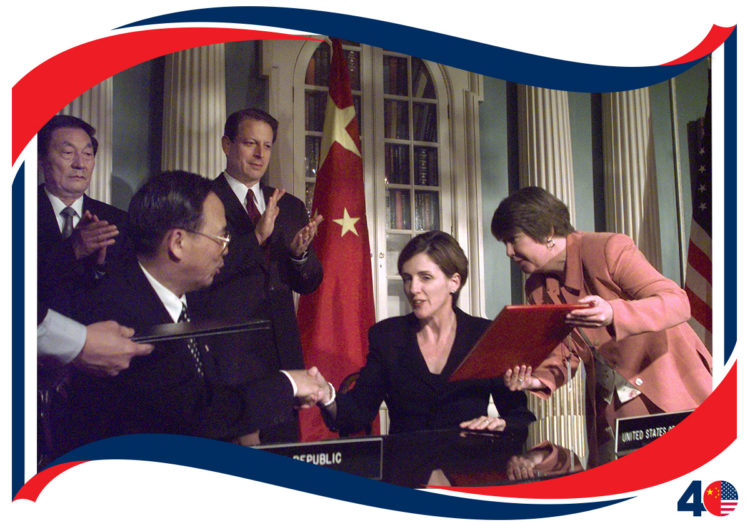 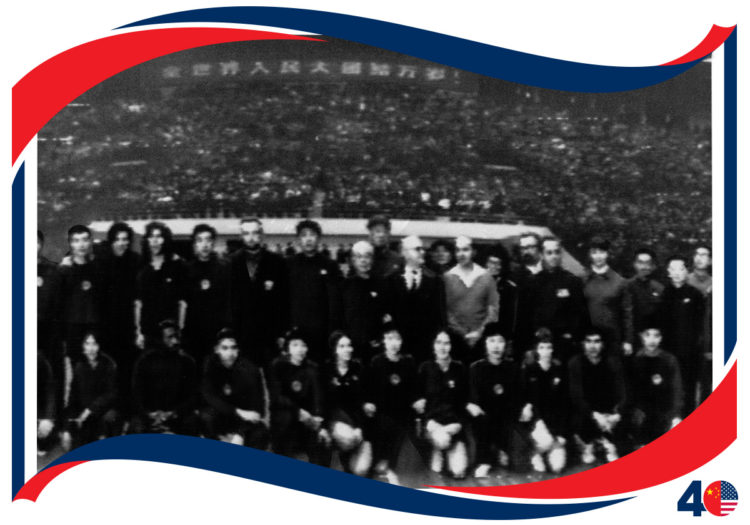 April 10, 1971 marks the beginning of the famous ping-pong diplomacy events between the United States and China. This sports exchange was the first public sign of warming relations between Washington and Beijing. The invitation came about from a chance encounter between American and Chinese ping-pong players at a tournament in Japan. A few days after that encounter, #OnThisDay, American ping-pong players arrived on the mainland. They and the journalists accompanying them were among the first Americans allowed to enter China since 1949. You can read more about the fascinating history here. (AP Images) 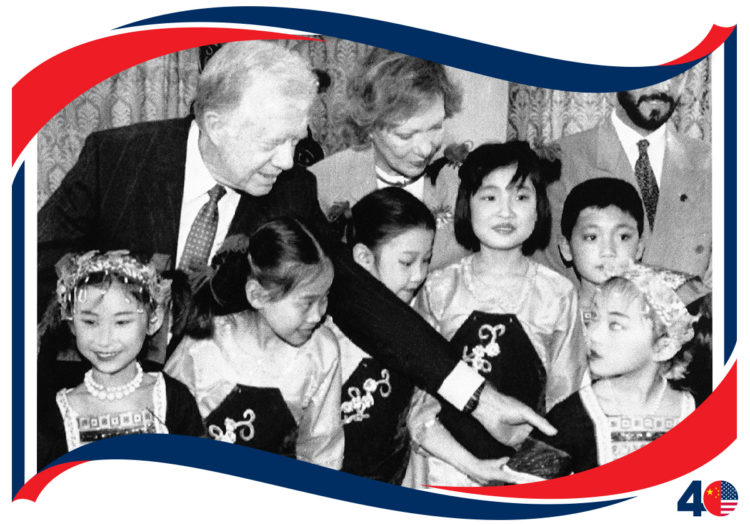 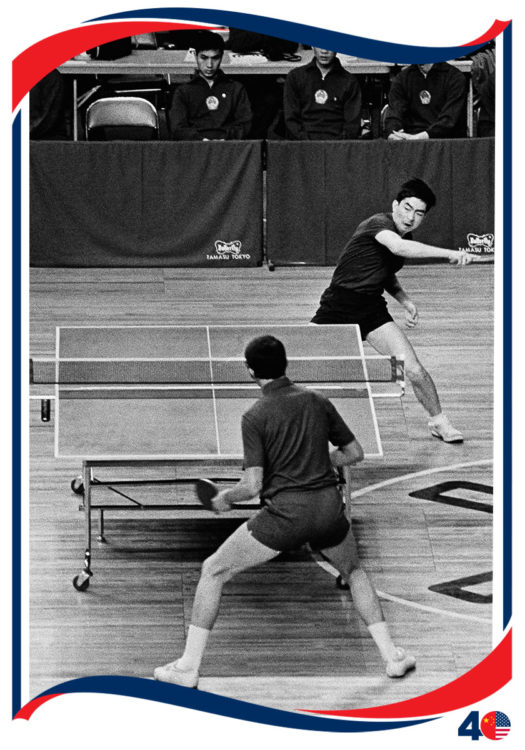 United States table tennis team member Dell Sweeris, foreground, of Grand Rapids, Mich., moves to knock back a smash by Liang Ke-Liang of the Chinese table tennis team, in a match in Detroit Michigan #OnThisDay, 15 April 1972. This was the second stage in the famous “ping-pong diplomacy” of the early 1970s, which helped bring the countries together. After the Chinese hosted American ping-pong players in 1971, Chinese players traveled to the United States in 1972. (AP Images) 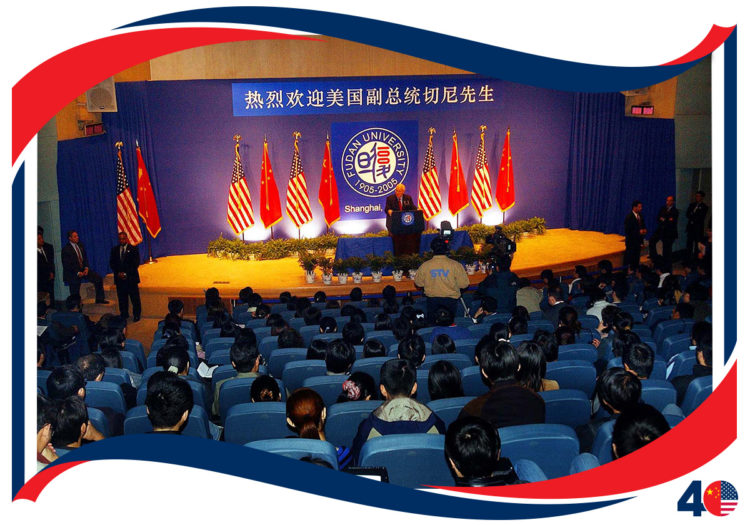 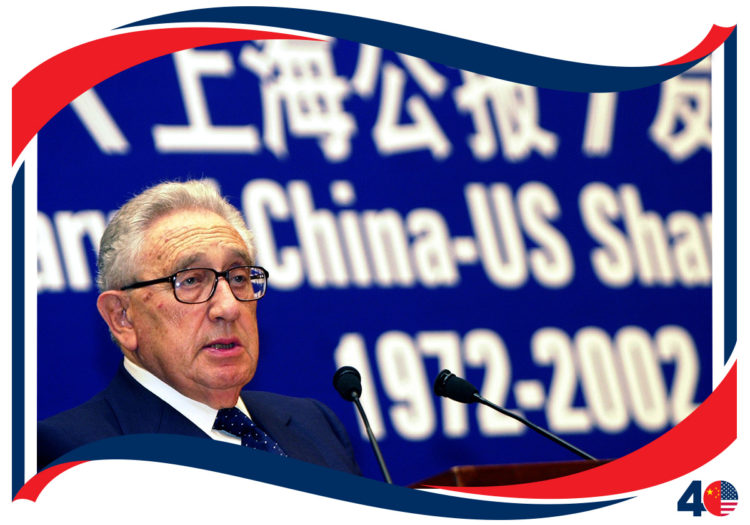 Former Secretary of State Henry Kissinger delivers a speech during a commemoration of the 30th anniversary of the “Shanghai Communique” #OnThisDay 15 April 2002 in Shanghai. This was one of the foundational documents for the re-establishment of U.S.-China ties. Dr. Kissinger spoke in front of an older image of the President Nixon and Chairman Mao meeting in Beijing. (AP Images) 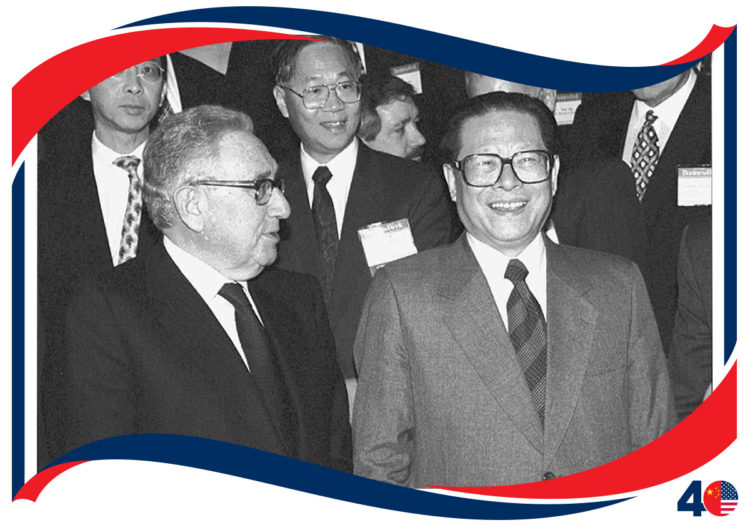 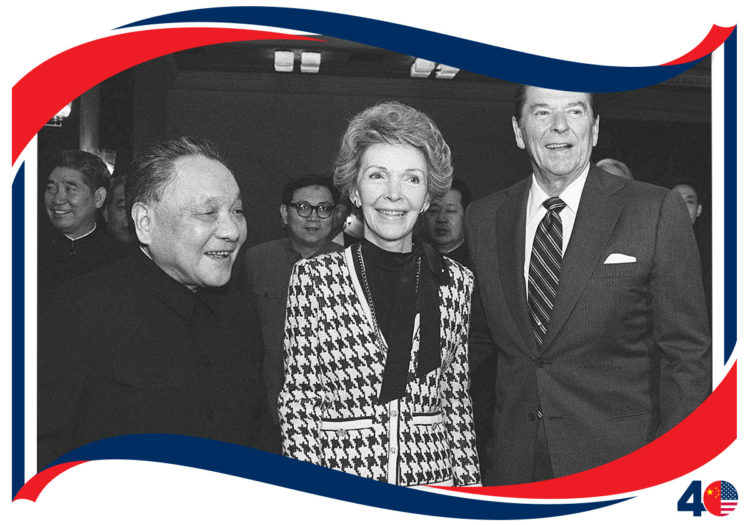 #OnThisDay, 26 April 1984, President Ronald Reagan arrived in Beijing to start a six-day state visit — the first by an American president since Richard Nixon in 1972. He was accompanied by his wife Nancy, and is pictured here with Deng Xiaoping. (AP Images) 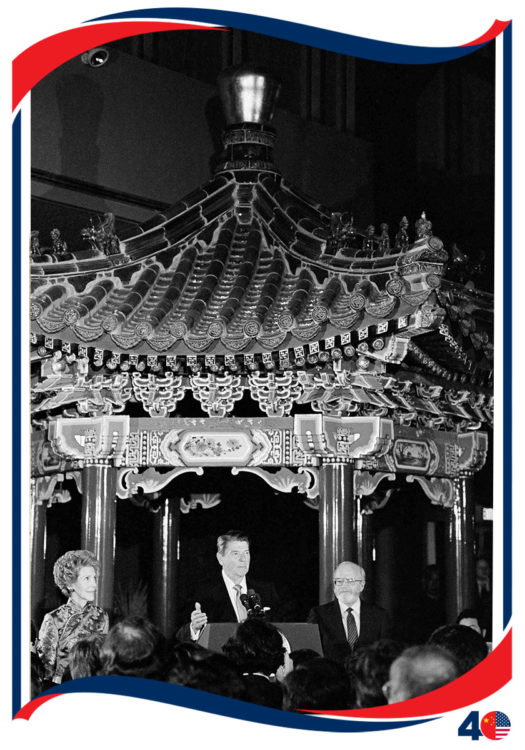 First Lady Nancy Reagan watches as U.S. President Ronald Reagan addresses a crowd in Beijing #OnThisDay 28 April 1984.  They were here on a six-day tour, meeting with political leaders, visiting the great wall, and speaking at a university. 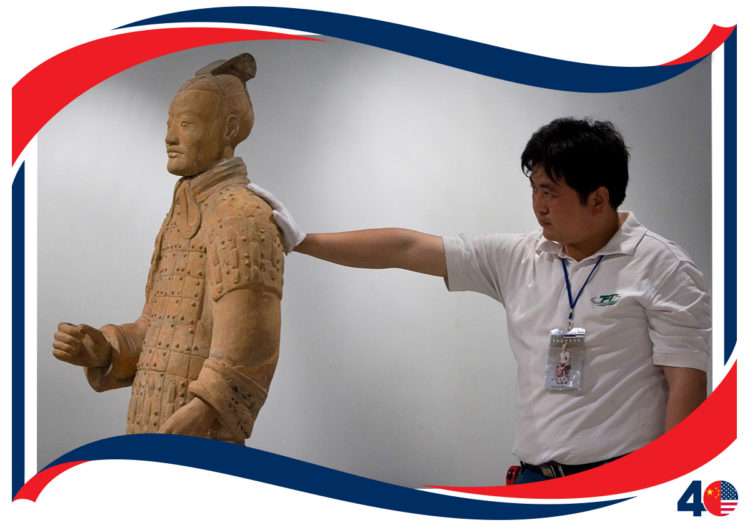 A Chinese worker at a Beijing museum prepares a Terracotta warrior for shipment to the United States #OnThisDay 28 April 2008.  A 100-piece set of the 2,200-year-old items, including 20 life-sized clay statues of warriors, acrobats and musicians, along with weapons, and decorative items in jade and copper, went on a 20 month tour of the United States, where they went on display in California, Georgia, Texas, and Washington D.C. 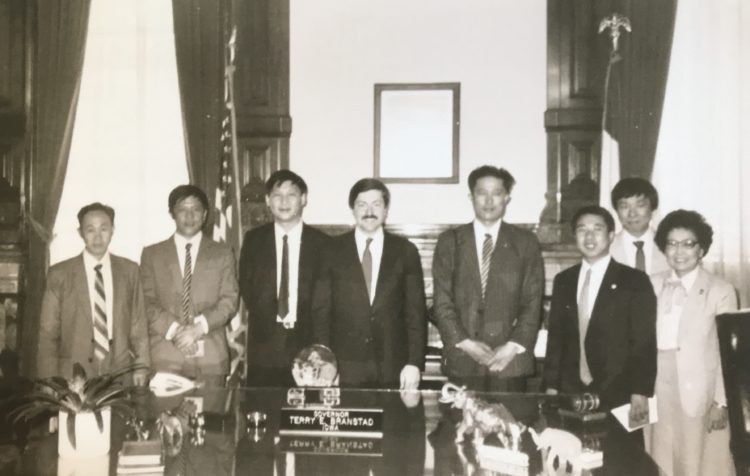 President Xi Jinping’s first visit to America was to the mid-western state of Iowa in April 1985.  At the time, President Xi was a 31-year-old county-level official from Hebei Province.  While there, he met with the then state Governor, Terry Branstad—who is now the U.S. Ambassador to China.