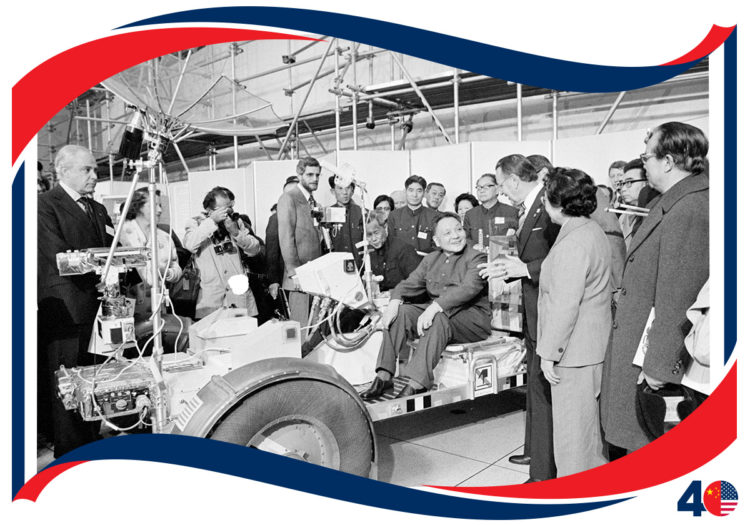 Vice Premier Deng Xiaoping sits in a model of the lunar rover vehicle during a tour of Johnson Space Center in Houston #OnThisDay, 2 February 1979.  Deng’s visit to the U.S. coincided with the normalization of diplomatic relations between Washington and Beijing.(AP Photo) 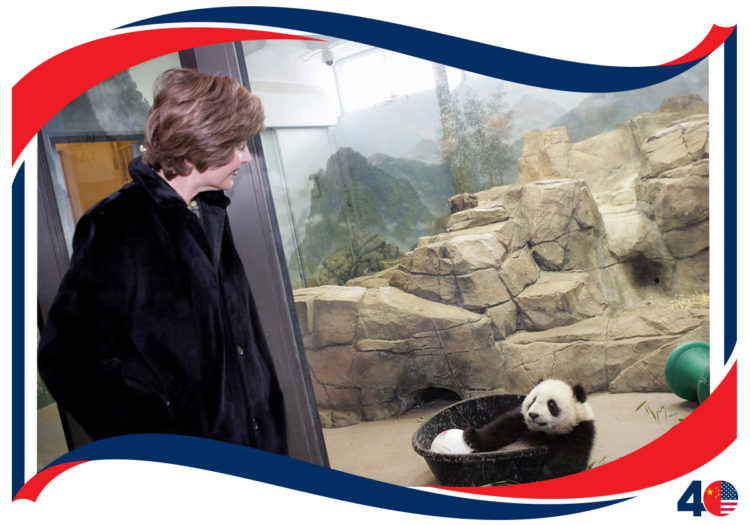 First Lady Laura Bush visits Tai Shan at the National Zoo in Washington D.C. Tai Shan was born at the National Zoo and was one of America’s most well-known furry residents until his move to China #OnThisDay, 5 February 2010, when he joined the Ya’an Bifeng Gorge Breeding Base of the Wolong National Nature Reserve near Chengdu. (AP Photo) 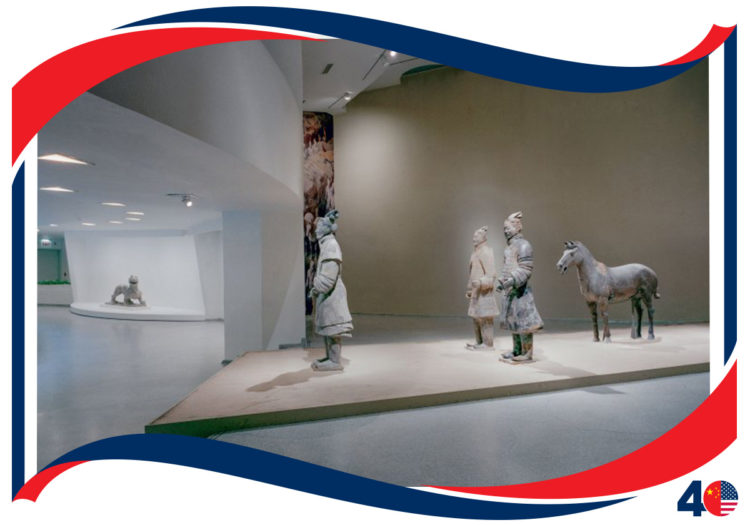 In February 1998, a major exhibition of Chinese art entitled “China: 5,000 Years, Innovation and Transformation in the Arts” opened at the Guggenheim Art Museum in New York City. The exhibition showcased around 500 pieces from over 50 lenders and 17 provinces in China, featuring the historical range of Chinese art and artifacts. #OnThisDay (Photo: Solomon R. Guggenheim Foundation) 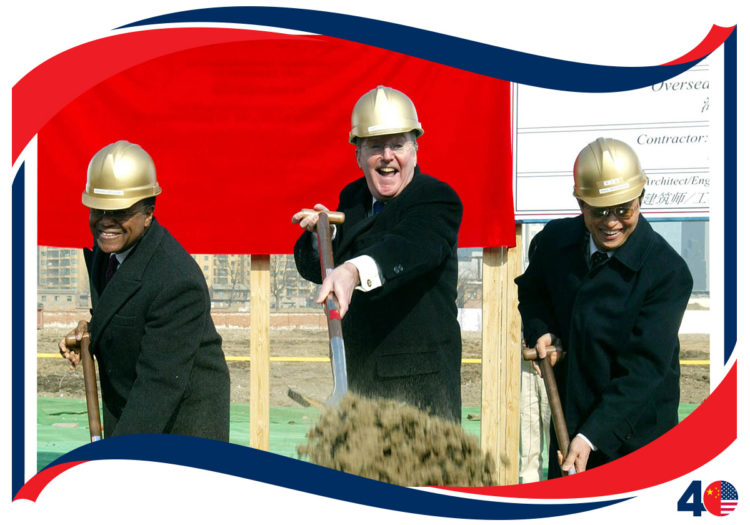 U.S. Ambassador to China Clark Randt, center, shovels dirt at the ground breaking ceremony for the new U.S. embassy in Beijing #OnThisDay, 10 February 2004.  Joining him were representatives from the Chinese Ministry of Foreign Affairs.  The embassy, a symbol of America’s dedication to the U.S.-China relationship, was completed in four years. (AP Photo) 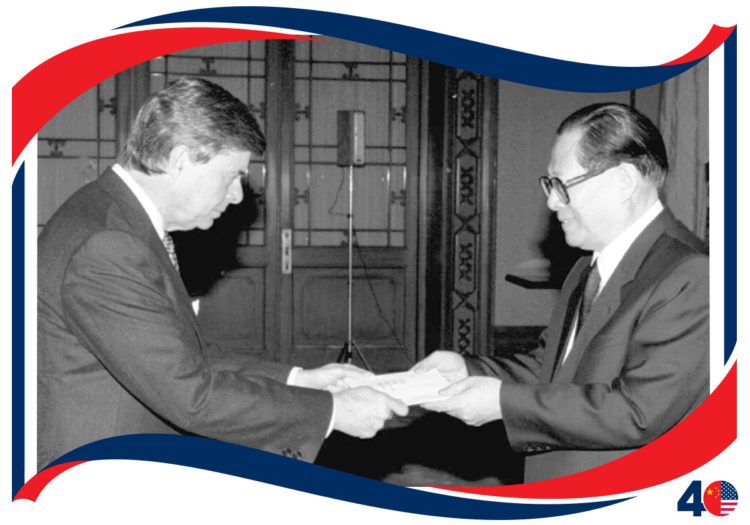 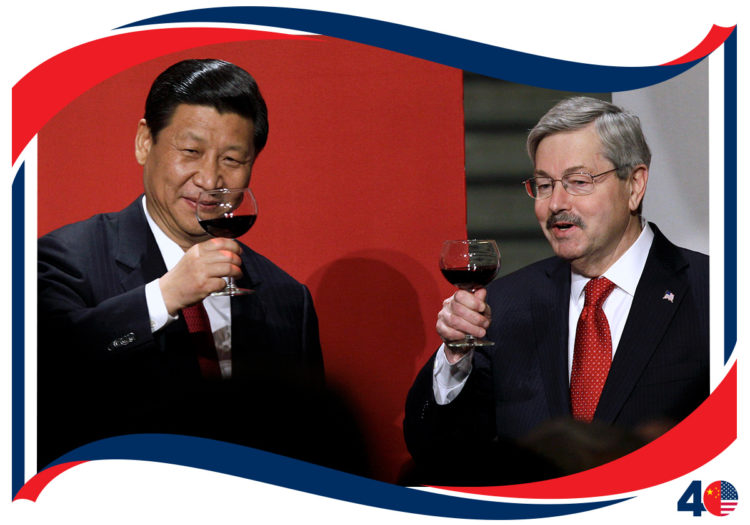 Chinese then-Vice-President Xi Jinping and then- Governor Terry Branstad raise a toast at the Iowa Statehouse in Des Moines, Iowa #OnThisDay 15 February 2012.  Branstad and Xi first met in 1984 when Xi visited Iowa as part of a trade delegation.

Xi Jinping also visited the home of Roger and Sarah Lande in Muscatine, Iowa, where he joked about receiving a gift of popcorn during his first visit to Muscatine in 1985.(AP Photo) 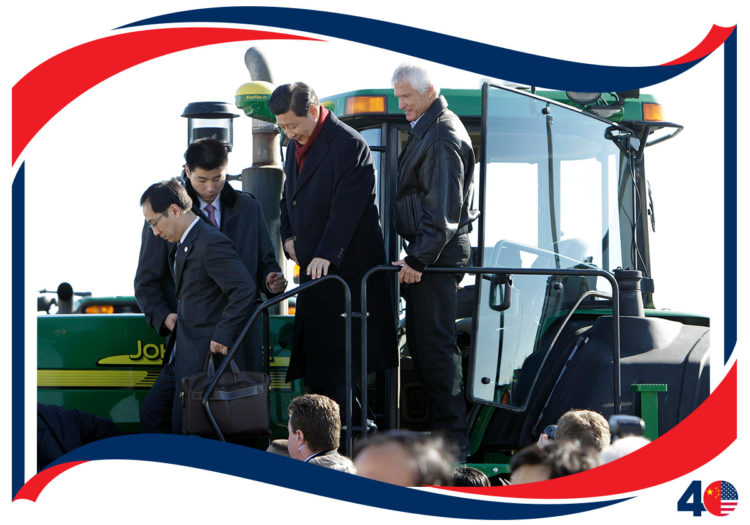 Then-Vice-President Xi Jinping climbs out of the cab of a  tractor with Rick Kimberley, right, while touring his family farm #OnThisDay 16 February 2012 in Maxwell, Iowa.  President Xi was returning to the places he visited during his 1985 trip to the United States.(AP Photo) 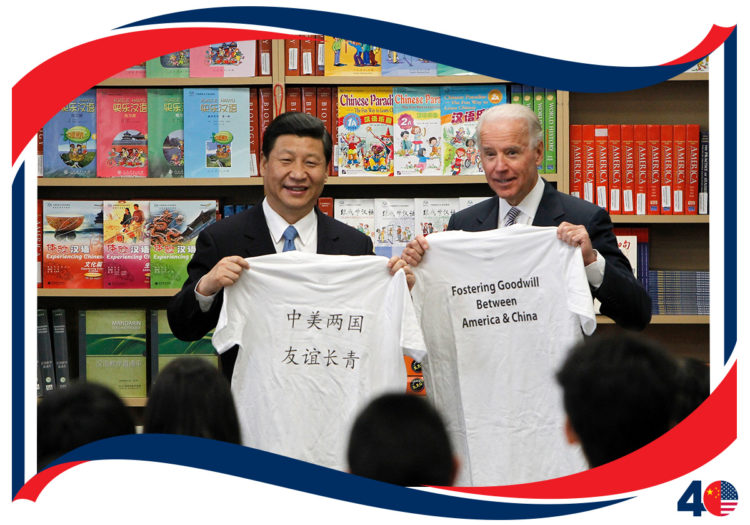 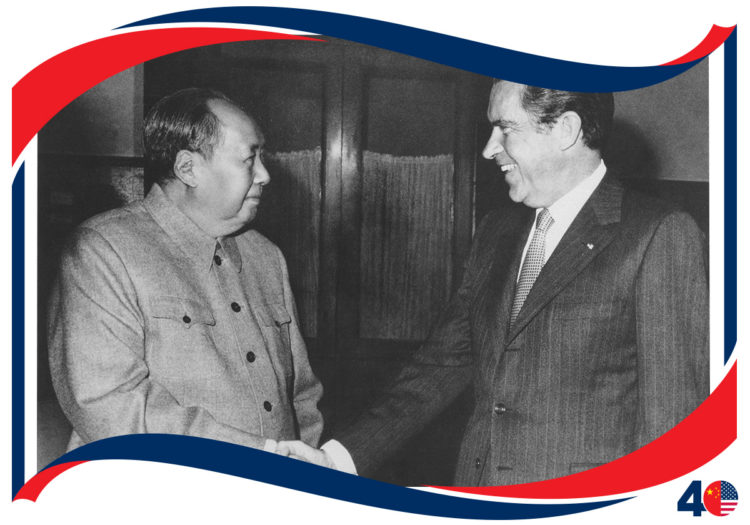 During his historic visit to China, #OnThisDay, 21 February 1972, President Nixon met with Chairman Mao in Beijing. They discussed the future of U.S.-China relations.(AP Photo) 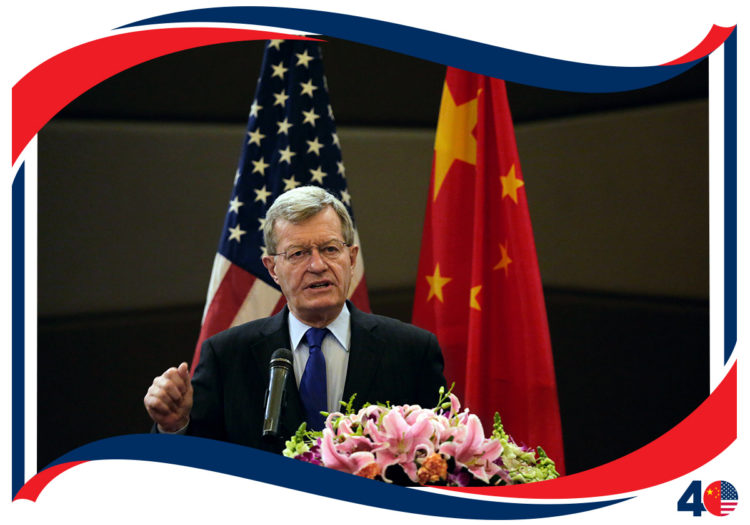 Max Sieben Baucus was sworn in as Ambassador to China #OnThisDay, 21 February 2014.  Ambassador Baucus’ had a lengthy record of public service, as one of the longest-serving Senators in U.S. history. During his years in China, Ambassador Baucus visited many of China’s provinces, where he enjoyed meeting with Chinese citizens and experiencing local culture.(AP Photo) 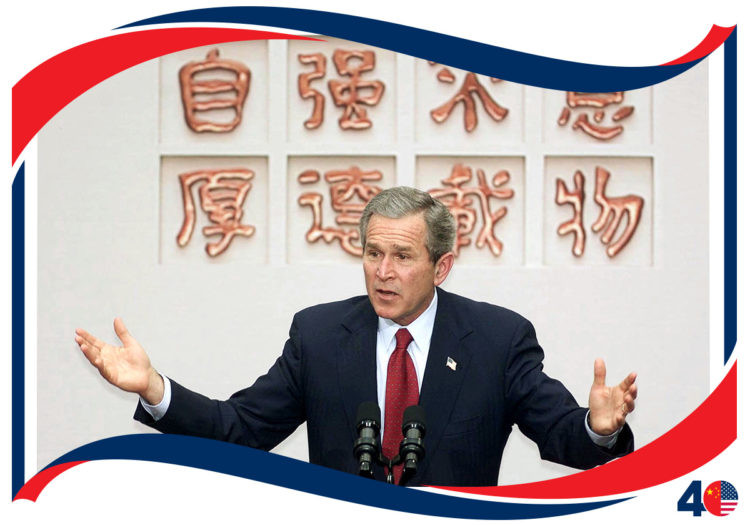 President Bush spoke to students at Tsinghua University #OnThisDay 22 February 2002 during an official trip to China.  In his remarks he reflected on his personal relationship with the Chinese people and appealed to the youth to embrace human rights and religious tolerance.(AP Photo) 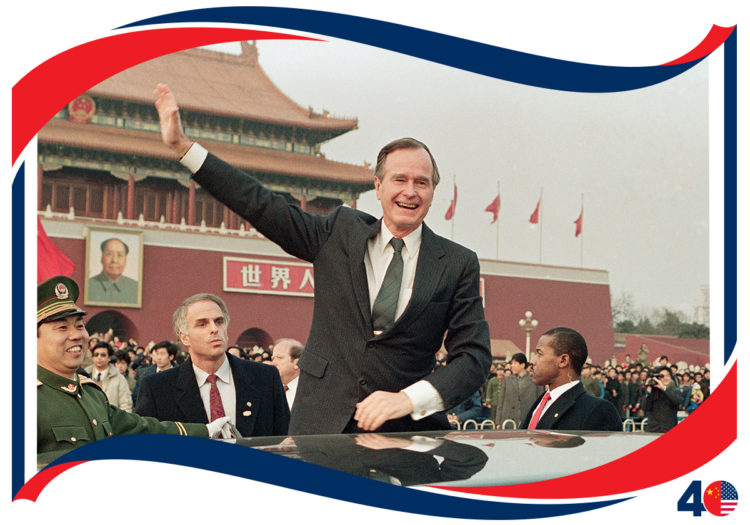 President George H.W. Bush waves to crowds in downtown Beijing on an official visit to China #OnThisDay, 25 February 1989.  Later, Premier Li Pang gifted a pair of “Flying Pigeon” bikes to the President and the First Lady.  As a U.S. Government representative in China in the 1970s, George H.W. Bush was known for riding his bicycle through Beijing’s hutongs.(AP Photo) 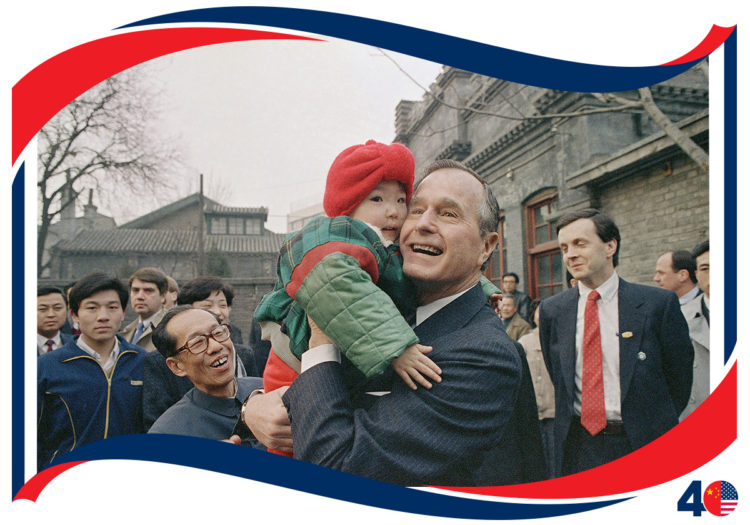 U.S. President George W. Bush holds Chou Ailing, 3 as he arrives for services at the Chongwenmen Protestant Church #OnThisDay 26 February 1989 in Beijing.  President Bush was on an official trip to China.(AP Photo) 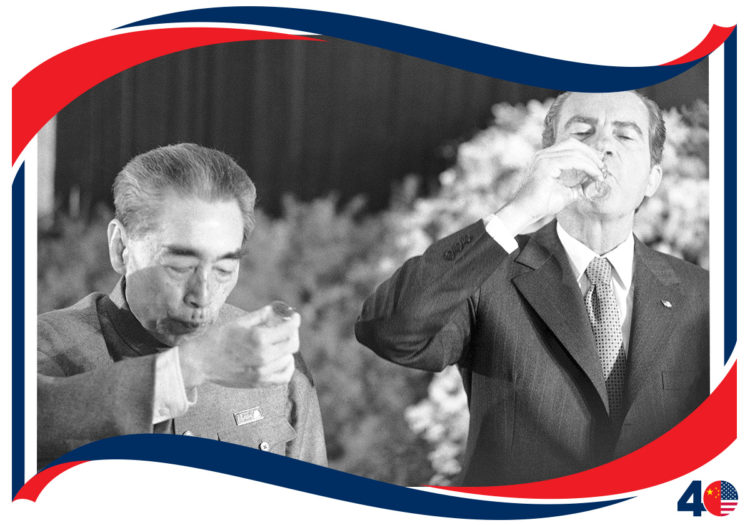 China’s Premier Chou En-lai and President Nixon join in a farewell toast at dinner in Shanghai #OnThisDay, 28 February 1972 as President Nixon wound up his week-long China trip.  Nixon described his visit as “the week that changed the world.”