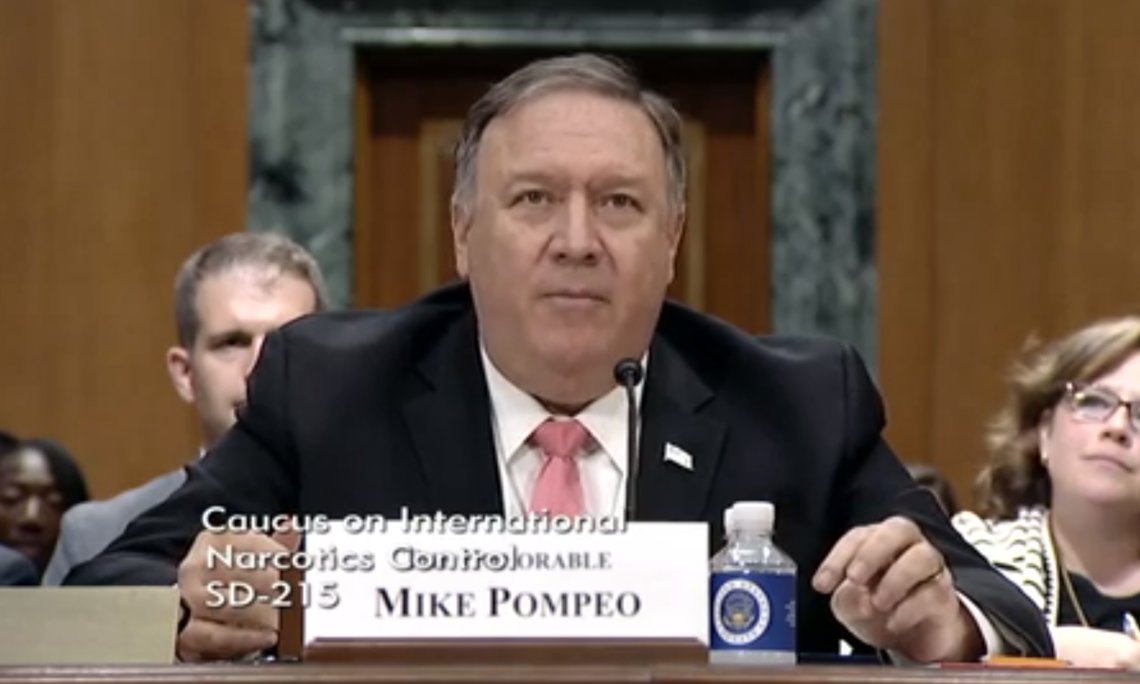 SECRETARY POMPEO: Great. Thank you. Thank you, Senator Cornyn. Thank you, Senator Feinstein. Thanks for the opportunity to be here. I’m really happy to be here. This is an important issue. When you think of the State Department, it is not the first thing that comes to top of one’s mind often, but know that inside the organization it is something that is a true priority for us. That’s why I was so happy to be invited here today.

I’ll be very brief, because I want to have a good conversation today. But you should all know that, like many of you, this is personal for me. I know many people that have been impacted by this set of issues. Just last month, there were seven Kansans died in a 10-hour period from a single overdose of cocaine laced with fentanyl. This is a serious matter. We talk about these big numbers, but we all know human lives that have been touched and families that have been ripped apart by this.

The State Department has a role here. Many U.S. Government agencies do. Most of the opioids sold in the United States are manufactured and trafficked into this country from abroad. That’s where our talents and skills and the team comes to bear. We have a clear role here.

I want to talk for just a minute about what we’re doing in a couple areas. And I know we’ll dig into them each a little bit further.

First, we’ve really focused on China, because of the increase in fentanyl since last – in the last two and a half years in this administration. It’s purchased online often and delivered directly to users and dealers through the mail, or often shipped through Mexico as well.

Not only the State Department, the Justice Department and our interagency partners have been working closely with China – I’ve had numerous conversations with them. On May 1st, China fulfilled its pledge to President Trump to control all fentanyl-like substances – which potentially number in the thousands of different substances – and develop an enforcement plan for each of them.

In Latin America, the problem’s a little bit different in nature. Mexico remains a production hub for methamphetamines and heroin and is a transit country for cocaine, fentanyl, and other drugs. As recently as last week, as part of our conversations about migration, we touched deeply on how it is we can work more closely together. The joint declaration we signed was mostly focused on migration, but a good deal of the conversation was to your point, Senator Cornyn, about the traffickers’ desire to move whatever product will bring a market price that causes them to have an incentive to continue to do the things that disrupt so many lives here in the United States.

We will – we’ll try and take down these criminal enterprises between all of the elements of the U.S. Government. We’ve donated equipment to the Mexican law enforcement, security forces; we’ve trained their officers to eradicate poppy and interdict drugs; we’ve provided them sniffing dogs. And yet, as you can see from the data today, many challenges remain.

Just a couple words about the rest of the hemisphere. I’ve met with President Duque multiple occasions. Both occasions, he continued to pledge his strong support to stop drug trafficking and to reduce the coca fields. There is a lot of work left to do. We are working to get the direction – the magnitude of that problem to turn the corner, to begin to decrease production inside of Colombia.

We’ve quadrupled the number of civilian eradicators alongside of them. And while the payoff has not yet demonstrated the effect we would like, it is fair to say that over – that Colombia destroyed over 60 percent more coca in the first four months of this year than they did in those same four months of last year.

Look, there’s a host of other countries, but I’ve gone on too long. I’m happy to take your questions and talk about other things. And I’ll submit the full statement for the record with your permission, Senator.