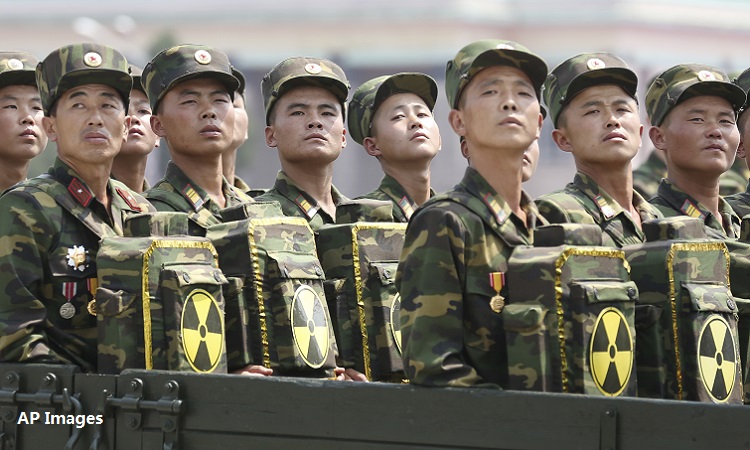 In this July 27, 2013, file photo, North Korean soldiers turn and look towards leader Kim Jong Un as they carry packs marked with the nuclear symbol at a parade in Pyongyang, North Korea. North Korea's vice foreign minister Han Song Ryol said in an interview with the Associated Press on Friday, Apri

“In response, the Trump administration, with the support of the international community, is applying diplomatic and economic pressure on North Korea to achieve the complete, verifiable and irreversible denuclearization of the Korean Peninsula and a dismantling of the regime’s ballistic-missile programs. We are replacing the failed policy of ‘strategic patience,’ which expedited the North Korean threat, with a new policy of strategic accountability.”

The U.S., its allies and the world are united in our pursuit of a denuclearized Korean Peninsula.

In the past few months, multiple illegal North Korean ballistic-missile and ICBM tests—coupled with the most recent bellicose language from Pyongyang about striking the U.S., Guam, our allies and our interests in the Asia-Pacific region—have escalated tensions between North Korea and America to levels not experienced since the Korean War.

In response, the Trump administration, with the support of the international community, is applying diplomatic and economic pressure on North Korea to achieve the complete, verifiable and irreversible denuclearization of the Korean Peninsula and a dismantling of the regime’s ballistic-missile programs. We are replacing the failed policy of “strategic patience,” which expedited the North Korean threat, with a new policy of strategic accountability.

The object of our peaceful pressure campaign is the denuclearization of the Korean Peninsula. The U.S. has no interest in regime change or accelerated reunification of Korea. We do not seek an excuse to garrison U.S. troops north of the Demilitarized Zone. We have no desire to inflict harm on the long-suffering North Korean people, who are distinct from the hostile regime in Pyongyang.

Our diplomatic approach is shared by many nations supporting our goals, including China, which has dominant economic leverage over Pyongyang. China is North Korea’s neighbor, sole treaty ally and main commercial partner. Chinese entities are, in one way or another, involved with roughly 90% of North Korean trade. This affords China an unparalleled opportunity to assert its influence with the regime. Recent statements by members of the Association of Southeast Asian Nations, as well as other regional and global voices, have made clear the international community holds one view regarding North Korea’s provocative and dangerous actions: They must stop. Pyongyang must stand down on those actions.

China has a strong incentive to pursue the same goals as the U.S. The North Korean regime’s actions and the prospect of nuclear proliferation or conflict threaten the economic, political and military security China has worked to build over decades. North Korea’s behavior further threatens China’s long-term interest in regional peace and stability. If China wishes to play a more active role in securing regional peace and stability—from which all of us, especially China, derive such great benefit—it must make the decision to exercise its decisive diplomatic and economic leverage over North Korea.

Our diplomatic approach also proceeds through the United Nations. The Security Council’s recent unanimous vote imposes new sanctions on North Korea and underscores the extent to which the regime has chosen to isolate itself from the international community. This vote, which also had Russia’s support, reflects the international will to confront the North Korean regime’s continuing threat to global security and stability.

We urge all nations to honor their commitments to enforce U.N. Security Council sanctions against North Korea and to increase diplomatic, economic and political pressure on the regime, specifically through the abandonment of trade, which finances the development of ballistic and nuclear weapons. The U.S. continues to consolidate international unity on the North Korean issue through increased engagement at the U.N., at regional diplomatic forums, and in capitals around the world.

While diplomacy is our preferred means of changing North Korea’s course of action, it is backed by military options. The U.S. alliances with South Korea and Japan are strong. But Pyongyang has persistently rebuffed Seoul’s attempts to create conditions whereby peaceful dialogue can occur, and has instead proceeded on its reckless course of threats and provocation. As a result of these dangers, South Korea’s new government is moving forward with the deployment of U.S. Terminal High-Altitude Area Defense against the threat. We commend South Korea’s decision to deploy this purely defensive capability.

Installing Thaad launchers on the Korean Peninsula and conducting joint military exercises are defensive preparations against the acute threat of military actions directed against the U.S., our allies and other nations. China’s demand for the U.S. and South Korea not to deploy Thaad is unrealistic. Technically astute Chinese military officers understand the system poses no danger to their homeland.

Absent China using its influence to show the world how a great power should act to resolve such a well-defined problem as North Korea’s pursuit of nuclear weapons and long-range missile capability, others in the region are obliged to pursue prudent defensive measures to protect their people. China’s Security Council vote was a step in the right direction. The region and world need and expect China to do more.

The U.S. is willing to negotiate with Pyongyang. But given the long record of North Korea’s dishonesty in negotiations and repeated violations of international agreements, it is incumbent upon the regime to signal its desire to negotiate in good faith. A sincere indication would be the immediate cessation of its provocative threats, nuclear tests, missile launches and other weapons tests.

The U.S. will continue to work with our allies and partners to deepen diplomatic and military cooperation, and to hold nations accountable to their commitments to isolate the regime. That will include rigorous enforcement of sanctions, leaving no North Korean source of revenue untouched. In particular, the U.S. will continue to request Chinese and Russian commitments not to provide the regime with economic lifelines and to persuade it to abandon its dangerous path.

As always, we will embrace military preparedness in the defense of our homeland, our citizens and our allies, and in the preservation of stability and security in Northeast Asia. And we will say again here: Any attack will be defeated, and any use of nuclear weapons will be met with an effective and overwhelming response.

North Korea now faces a choice. Take a new path toward peace, prosperity and international acceptance, or continue further down the dead alley of belligerence, poverty and isolation. The U.S. will aspire and work for the former, and will remain vigilant against the latter.