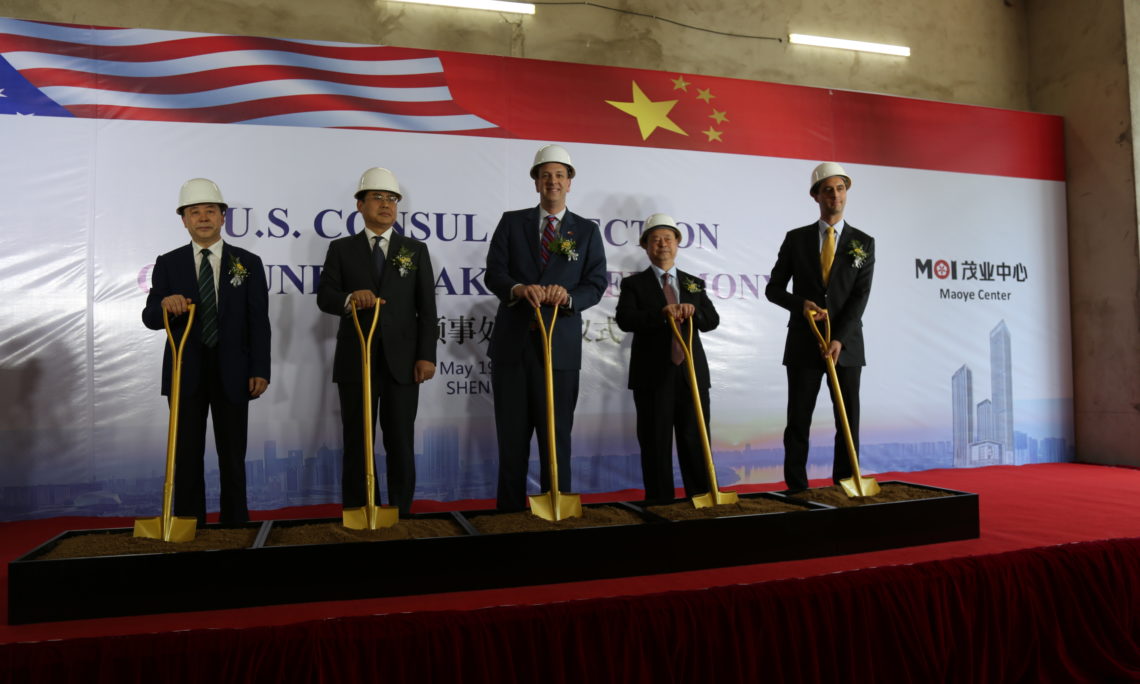 May 19, 2017 (Shenyang) – The U.S. Consulate General in Shenyang broke ground today on the site of its future Consular Section at the Maoye Center in Shenyang. The new facility will include 25 windows for intake processing, capturing biometrics, visa interviews, and providing American Citizen Services, a significant increase from the seven windows within the Consular Section’s current facility. Construction will begin this month on the new office space and will be completed in the summer of 2018.

During the groundbreaking ceremony, U.S. Consul General Greg May stated, “When we reopened in 1984, we processed at most a few dozen visas per week.  Today, in the same building, we frequently handle more than one thousand per day, and in 2016 we issued over 140 thousand non-immigrant visas.” He highlighted, “More and more people from the three provinces of Northeast China are going to the United States to sightsee, to do business, to study, and to build stronger ties between our countries.

Consul General May went on to emphasize the Consular Section’s current need for a bigger work space. He stated, “This space will be much larger and, when we open next year, it will allow us to keep up with the growing demand for consular services while providing a more efficient and more comfortable experience for our visa applicants. This facility will also allow us to better provide passport and other services to U.S. citizen residents of Northeast China.”

The Consular Section in Shenyang is one of the busiest in the world.  Since the introduction of the 10-year business and tourist visas in November 2014, the Consular Section processed more than 330,000 nonimmigrant visas.  In his concluding remarks, Consul General May clarified that only the Consular Section that will be moving to the Maoye building next year. The remainder of the Consulate, including the Political/Economic Section, Commercial Section, and Public Affairs Section will remain at the same location on 14th Latitude Road.