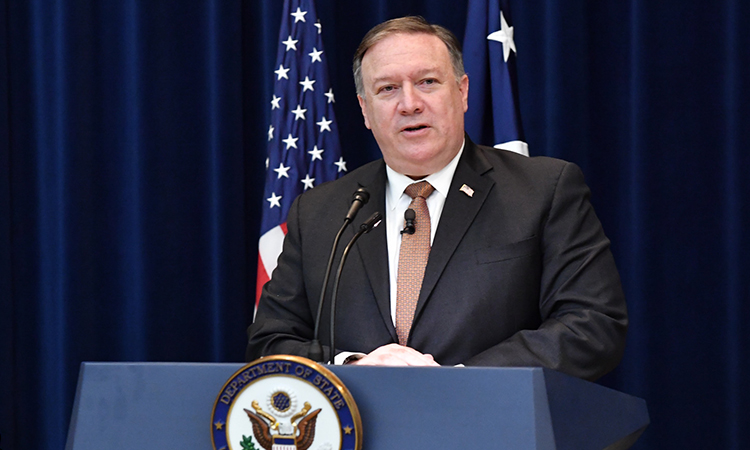 QUESTION: President Trump just said the United States could absolutely sign an agreement with North Korea to end the Korean War, but last week he just said he’s not going to sign anything during the summit. So could you please clarify this? And what more concrete result can we expect from the summit?

SECRETARY POMPEO: So President Trump has been very clear all along that he is prepared to provide North Korea with the security assurances, the warm political relationships that they want and are demanding in exchange for actions by North Korea, the denuclearization of the peninsula. The exact timing and the exact modalities of that occurring are yet to be agreed to, but the President is willing to do something big, something bold. I think that Chairman Kim Jong-un is prepared to do that as well. And then along with our partners – China, Japan, South Korea – we can all move forward together and have a fundamental shift in the relationship between North Korea and its region, and frankly, North Korea and the world.

QUESTION: China is a signed party of the 1953 Korean Armistice Agreement. There are some concerns in China arguing that without China’s participation any agreement to end the Korean War is invalid. What is your take on that? And is there a role for China to play in this process?

SECRETARY POMPEO: Well, I’m very confident that China will play a role. Indeed, they have already to date. They’ve been important partners in the pressure campaign, right? They’ve done things that they’ve never agreed to do before to encourage Chairman Kim and the North Koreans to consider whether they’re prepared to make a flip, right? They’ve relied historically on their nuclear program to provide their security, and what we’re asking them to do is to stand that on its head, to understand that it’s actually the possession of those nuclear weapons that create the greatest risk to North Korea. And so China has already been part of it in discussions between Chairman Kim and President Xi.

So yes, China will certainly have a part. The first step, however, will take place on June 12th, where President Trump and Chairman Kim will have a chance to meet and begin what we hope is a successful march towards the denuclearization of the peninsula.

QUESTION: If the summit turns out to be a historic, successful meeting as you planned, can we expect sanctions to be lifted immediately right after the summit?

SECRETARY POMPEO: The President has been very clear: Sanctions will not be lifted until such time as the denuclearization itself has been completed. Look, we’ve been down the path before where promises have been made and not kept. That would be unacceptable; President Trump is not prepared to take that deal. We are prepared to do many things, but the economic sanctions themselves cannot be lifted until such time as we have confidence that the peninsula has been denuclearized.

QUESTION: What’s your vision for Chinese-U.S. relationship going forward (inaudible)? And does the trade dispute actually affect your diplomatic engagement with China?

You mentioned trade in particular. President Trump is committed to rebalancing the trade relationship between the two countries. He has sent our Secretary of Treasury, our Secretary of Commerce. Chinese economic leaders have traveled to the United States to begin to work on how – what that might look like and how that change might take place. And so I am sure we’ll talk about that too, but my real mission there is to go do two things: one, to share with them how the meetings went between President Trump and Chairman Kim Jong-un; but also to meet with them in my first trip as Secretary of State to China.

QUESTION: Do you see China as a strategic competitor or as a partner to cooperate on most issues?

SECRETARY POMPEO: It’s complicated to put an English word on this. There are many places where China and the United States will do great things together. There are other places where the two countries are competing, and they present challenges to each other. Our job as diplomats – mine as the Secretary of State and my Chinese counterparts – is to work so that it’s not a zero-sum game between our two countries, where we can succeed together.

QUESTION: When you met Chinese Foreign Minister Wang Yi in – at – actually, at the State Department —

QUESTION: Yes. You committed to “one China” policy, and you said U.S. policy towards Taiwan hasn’t changed. So will you allow Taiwanese leader Tsai Ing-wen to make the planned transit through United States this August?

SECRETARY POMPEO: So what I can say is this: The United States has had a long, very consistent policy with respect to how we address Taiwan. In the Trump administration, that policy is based on a longstanding set of U.S.-agreed-to principles. That policy hasn’t changed in our administration, and I don’t expect it to.

QUESTION: Thank you very much, Secretary Pompeo, for your time.

SECRETARY POMPEO: Thank you very much.