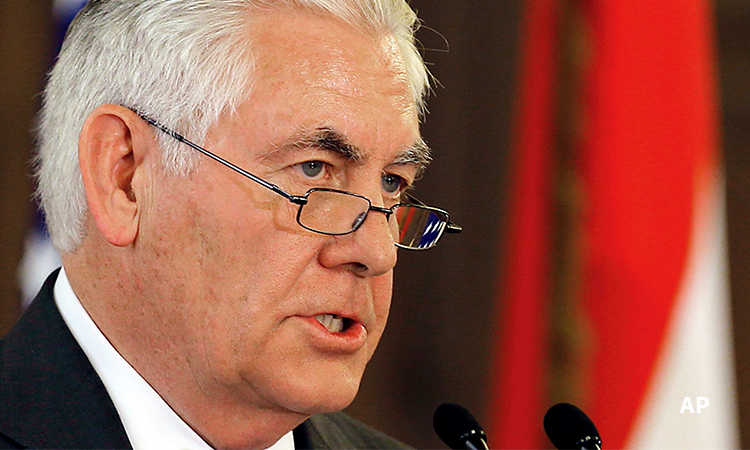 MS BRENNAN: Rex Tillerson admits he was an unconventional choice for Secretary of State. He had no prior government experience. But as CEO of ExxonMobil, he had crisscrossed the globe striking deals with foreign leaders. Secretary Tillerson, a man who still considers himself a Boy Scout and follows what he calls the Code of the West, is fiercely private and has shied away from interviews, but he agreed to do a rare, wide-ranging one with us. With the Olympics underway and North Korea very much on his mind, he talked to us about what may be the toughest deal he will ever work on.

QUESTION: In his New Year’s Day speech, Kim Jong-un said the “entire area of the U.S. mainland is within our nuclear strike range.” That’s got to make you nervous.

SECRETARY TILLERSON: It does make us nervous. It also – it also stiffens our resolve. That kind of a threat to the American people by a regime like this is not acceptable, and the President’s meeting his responsibilities as Commander-in-Chief of asking our military – Secretary Mattis at the Defense Department – to ensure we are prepared for anything.

QUESTION: And those military options are there in case you fail.

SECRETARY TILLERSON: In case I fail. I say to my Chinese counterpart, “You and I fail, these people get to fight. That’s not what we want.”

QUESTION: But you are willing to work with and potentially negotiate with Kim Jong-un?

SECRETARY TILLERSON: Well, that’s who we will have to work with to achieve this diplomatically. What we have to determine now is: Are we even ready to start? Are they ready to start? And if they’re not, we’ll just keep the pressure campaign underway, and we will increase that pressure. And we are doing that. Every month there are new sanctions rolled out. The world wants North Korea to change.

QUESTION: Well, there are some questions about how badly China wants them to change. You’ve really needed their help to put economic pressure on Kim Jong-un. What reassurances have you given to China so that they actually follow through?

SECRETARY TILLERSON: What I think we got a common understanding with China is that North Korea represents a serious threat to China as well. And we’ve been very clear with them that they are going to have an important role to play once we get to the negotiating table.

QUESTION: So I hear you saying there these wouldn’t be one-on-one talks. China would be at the table.

SECRETARY TILLERSON: Early on they might be one-on-one discussions. For the U.S., first, and North Korea to determine? Is there a reason to begin to put the construct for negotiations in place?

QUESTION: What is the carrot that you’re dangling for North Korea to convince them to talk?

SECRETARY TILLERSON: We’re not using a carrot to convince them to talk. We’re using large sticks, and that is what they need to understand. This pressure campaign is putting – is having its bite on North Korea, its revenue streams. It’s having a bite on its military programs.

QUESTION: But to say “full denuclearization” – why would they agree to give up something they’ve already got that they think is an insurance policy?

QUESTION: You talked a lot about something that you’ve called the Code of the West. What does that mean?

SECRETARY TILLERSON: Well, the Code of the West – as the West was unfolding, there wasn’t a lot of law enforcement, and people basically relied upon each other’s word and “as my word is my bond.” And I’ve used that throughout my life as well, even at ExxonMobil. I would sit down with the head of state for that country or the CEO of that company, and we’d look each other in the eye, and I’d say, “All I need to know is that you’re going to live up to your side of this deal, and I give you my word I’ll live up to my side of this deal.”

And then a lot of the Code of the West was people were very loyal to their organizations. And the phrase “riding for the brand” is a phrase that’s always stuck with me that —

QUESTION: Riding for the brand?

QUESTION: And what is the brand for you now?

SECRETARY TILLERSON: The State Department, the United States Government, the American people are my brand.