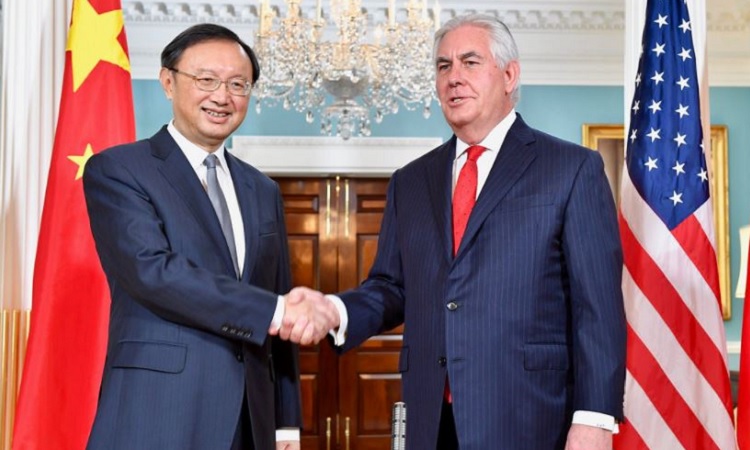 “Secretary Tillerson hosted Chinese State Councilor Yang Jiechi at the State Department for a bilateral meeting on February 8, 2018.  They agreed on the importance of continuing a constructive and productive relationship aimed at cooperation on mutual challenges and addressing our differences forthrightly. During the meeting, both sides reaffirmed President Trump and President Xi’s commitment to keep up pressure on North Korea’s illegal nuclear weapons and missile programs. They discussed the need to achieve a fair and reciprocal bilateral economic relationship and shared approaches to stemming the flow of deadly narcotics. Secretary Tillerson and the state councilor look forward to continuing discussions on these and other topics at the next Diplomatic and Security Dialogue during the first half of 2018…We have a broad relationship with China. We have areas of cooperation, obviously, where we agree on the issue of North Korea and the importance of denuclearization. On that matter, we expect, we hope, that China will do more, because we know that they can do more in terms of adhering to UN Security Council resolutions and sanctions that have been put in place against North Korea. We’re not seeking an adversarial relationship with the Government of China. We are simply identifying actions that China has taken that undermine a rules-based order. Our conversations are deep and broad. They can, in addition to including trade and issues of national security, also include cyber issues, also including human rights. Democracy is something that often comes up, and freedom of the press is something that comes up as well.”