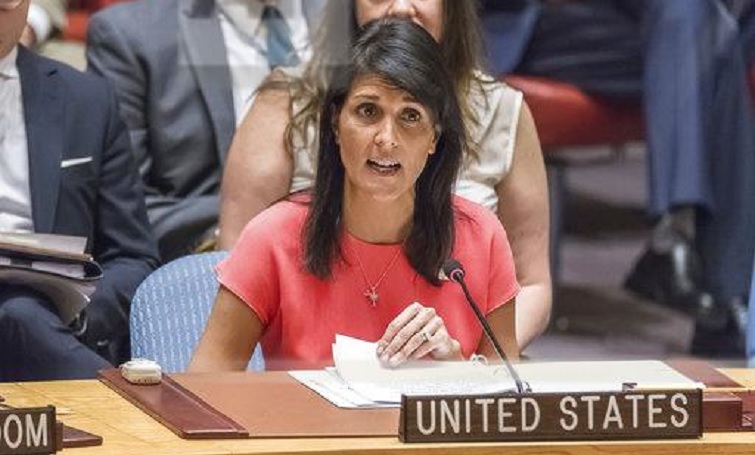 Exactly one month ago, I came before members of the Security Council and declared it was a dark day for the world because of the dangerous and irresponsible actions of North Korea. Almost one week ago, I said the days of talking were over and it was time to act.

Today the full Security Council has come together to put the North Korean dictator on notice. And this time, the Council has matched its words and actions.

The resolution we’ve passed is a strong, united step toward holding North Korea accountable for its behavior. Today, the Security Council increased the penalty of North Korea’s ballistic missile activity to a whole new level.

North Korea’s irresponsible and careless acts have just proved to be quite costly to the regime.

This resolution is the single largest economic sanctions package ever leveled against the North Korean regime. The price the North Korean leadership will pay for its continued nuclear and missile development will be the loss of one-third of its exports and hard currency.

This is the most stringent set of sanctions on any country in a generation.

Nuclear and ballistic missile development is expensive. The revenues the North Korean government receives are not going towards feeding its people.

Instead, the North Korean regime is literally starving its people and enslaving them in mines and factories in order to fund these illegal nuclear programs.

Even as famine looms on the horizon; even as the regime continues to ask for international assistance to cope with devastating floods and a possible drought later this year; their displays of aggression take precedence over their own people.

It is the continued suffering of the North Korean people that should remind the Security Council that, while this resolution is a significant step forward, it is not nearly enough.

The threat of an outlaw, nuclearized North Korean dictatorship remains. The unimaginable living conditions of so many of the North Korean people are unchanged.

The North Korean regime continues to show that widespread violations of human rights go hand in hand with threats to international peace and security.

I thank each and every one of my colleagues who worked so hard to bring this resolution to a vote. I have previously pointed out that China has a critical role to play on matters related to North Korea. I want to personally thank the Chinese delegation for the important contributions they made to this resolution.

We must work together to fully implement the sanctions we imposed today and those imposed in past resolutions.

The step we take together today is an important one. But we should not fool ourselves into thinking we have solved the problem. Not even close. The North Korean threat has not left us. It is rapidly growing more dangerous. We’ve seen two ICBMs fired in just the last month. Further action is required.

The United States is taking – and will continue to take – prudent defensive measures to protect ourselves and our allies. Our annual joint military exercises, for instance, are transparent, and defense-oriented. They have been carried out regularly and openly for nearly 40 years. They will continue.

Our goal remains a stable Korean peninsula, at peace, without nuclear weapons. We want only security and prosperity for all nations – including North Korea.

Until then, this resolution and prior ones will be implemented to the fullest to maximize pressure on North Korea to change its ways.

Today is a good day at the United Nations. We will need many more such days in order to peacefully resolve the crisis that has been created by North Korea’s dangerous and illegal actions. As I’ve said before, time is short. But today we have taken one step in the right direction.

Thank you, again, to my colleagues and their teams for their action and support towards sending a strong message to the North Korean regime.