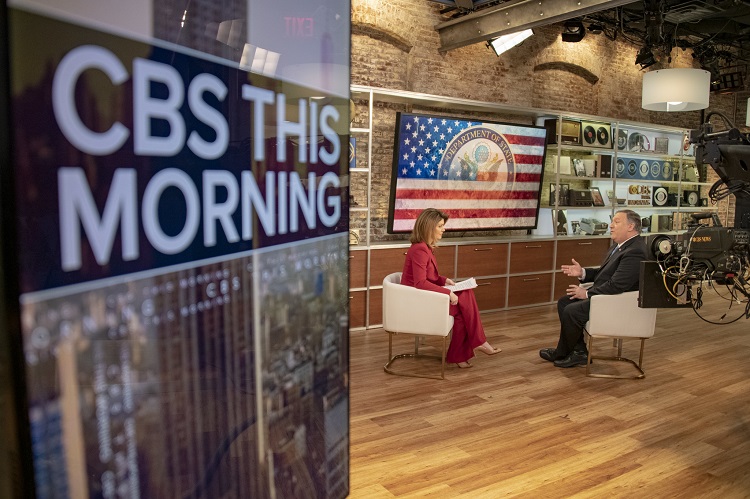 QUESTION: How are we fighting back against that Chinese threat? Because you’ve described it as a threat to our democracy from the Chinese.

SECRETARY POMPEO: It very much is. They very much want to undermine our Western values, the rule of law, transparency. All the things that we hold most dear, China has a different value set. Look, they’re an important trading partner. We have – in Kansas, we sold a lot of products into China. We want that; President Trump wants that too. But we have to change the relationship in a way that it is fair, that it’s reciprocal, that they’re not stealing our stuff, and push back against them, whether the threat is in the South China Sea, the threat is to our intellectual property, or the threat is of their espionage here inside the United States.

QUESTION: I want to turn now to North Korea because you have been heavily involved in this. You’ve met more with Kim Jong-un, the leader, than just about anybody else. President Trump’s second summit with the North Korean leader failed to produce an agreement to declare and denuclearize their nuclear weapons. Will there be a third summit with North Korea?

SECRETARY POMPEO: I’m confident there will be.

SECRETARY POMPEO: I hope so. Look, we came out of Hanoi with a deeper understanding of each other, the positions that the two sides had. The two leaders were able to make progress in that respect. We didn’t get as far as the world is demanding. These are global sanctions that are on North Korea today.

QUESTION: Are you disappointed?

SECRETARY POMPEO: It’s a negotiation, and we’ve always known this was going to take a while, so I don’t know that I was disappointed. You always hope you’ll make progress faster, better. You know that in every interaction you have. We’re determined; I’m convinced the North Koreans are determined as well. Chairman Kim has promised me, he’s promised President Trump he will denuclearize. Now it’s the mission of my team to make sure that that happens.

QUESTION: And so this is really going to come to a head next week, again, because the President of South Korea, Moon Jae-in, is coming to the White House to meet with President Trump and you. Will you agree to some easing of economic sanctions to continue the momentum on these talks with the North Koreans?

SECRETARY POMPEO: President Trump has been unambiguous. Our administration’s policy is incredibly clear: Economic sanctions, United Nations Security Council sanctions, will not be lifted until we achieve the ultimate objective that we set out now almost two years ago.

QUESTION: So it’s my understanding that the South Koreans are really pushing the U.S. to try and open some of these economic sanctions – the Kaesong manufacturing park, the reopening of tourism in North Korea – they want to continue this. You’re saying the U.S. is going to say, no, we’re not going there?

SECRETARY POMPEO: I talk to my South Korean counterpart a lot. She’s a delightful, capable minister for their country. They’re neighbors with the North Koreans. Many North – South Koreans have family members there. I understand the sentiment, but they’ve been great partners, and we have worked closely together to enforce these sanctions. We appreciate what they’re doing.

QUESTION: With the North Koreans?

QUESTION: Between the U.S. and the North?

QUESTION: And the South and the North?

SECRETARY POMPEO: Yes, we have had conversations after Hanoi about how to move forward.

QUESTION: And again, the significance of next week, April 11th, the day that the South Korean president will meet with President Trump, it’s a big day in North Korea —

QUESTION: — is my understanding, that Kim Jong-un is going to give a big speech there. What are you watching from in that speech? Are we expecting some sort of surprise out of North Korea next week?

SECRETARY POMPEO: It is a big day. It’s something that’s an annual event where the leader of North Korea speaks to his people. We’ll watch very closely what he says. I don’t expect there’ll be great surprise, but I do hope that he will share his sentiment, his sentiment that says: We – I believe, as the leader of North Korea, I believe the right thing to do is for us to engage with the United States to denuclearize our country, and that we’ll have a brighter future for the North Korean people.  We hope that’s what he’ll talk about with his people, and we’ll be watching it very closely.