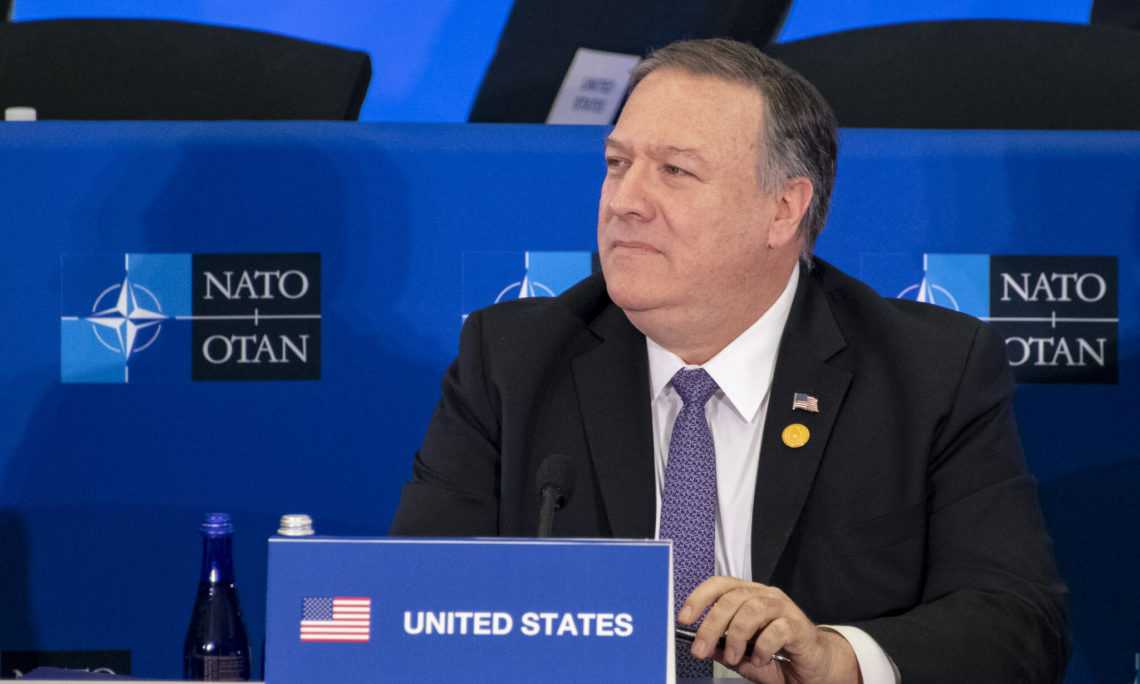 SECRETARY POMPEO:  So good afternoon, everyone.  Seventy years ago today, 12 courageous nations came together to form an alliance that to this day remains the bedrock guarantor of Western security and democratic liberties.  Today, our 29 nations believe in our founding mission.  We believe in deterrence to keep the peace.  We believe in our common defense, as captured in Article 5 of the treaty.  We believe that Western democratic ideals are worth defending – and defend them we will.

Seventy years ago, the great Dean Acheson said that the NATO alliance was, quote, “a statement of the facts and lessons of history,” end of quote.  He knew that if free nations do not stand together, they will fall one by one.  The same is true today.

QUESTION:  … . And then I have another question about China.  NATO allies have not followed U.S. requests to cut off Huawei.  So do you think that that could become a risk for intelligence sharing and military communications in the alliance in the future?

SECRETARY POMPEO:  … . As for the risks associated with the installation of Chinese technology in systems related to security, there is undoubtedly the risk that NATO or the United States will not be able to share information in the same way it could if there were not Chinese systems inside of those networks, inside of those capabilities.

We’ve done our risk analysis in the United States; we have now shared that with our NATO partners, with countries all around the world.  They understand the concerns – not our concerns, but the factual concerns associated with companies so deeply connected to their own government who would be willing to act at the behest of their government, the risk that that presents to information management.  And we have made clear that if the risk exceeds the threshold for the United States, we simply won’t be able to share that information any longer.  And our task is to do education, make sure they understand – every sovereign nation that will make its own decision, and then the United States will make its decision.

QUESTION:  … . Italy signed BRI Initiative with China.  Do you consider that to be a threat to the interoperability of NATO?

SECRETARY POMPEO:  … . [A]s I said in response to the previous question, every country has to make its own decisions about how it wants to respond to Chinese debt-trap diplomacy or Chinese efforts to sell goods at below market.  They clearly have a security component to the transaction.  But each nation will make its own choices.  Then the task falls to every other country to observe that, see what risk it presents to them if they begin to engage in those systems, in that infrastructure, that IT infrastructure or transportation infrastructure, and respond to that threat.

SECRETARY POMPEO:  Let me just add one thing to that.  It is one thing to compete in an open, fair, transparent way.  The United States is prepared to compete with our NATO allies, with China, with any country that shows up with a commercial transaction – a better mousetrap, a better idea – and compete with fair, reasonable, transparent transactions.  It is a very different thing to engage in transactions that have a national security component to them.  When a nation shows up and offers you goods that are well below market, one ought to ask what else is at play, why it was that that entity showed up with a deal that is literally too good to be true.