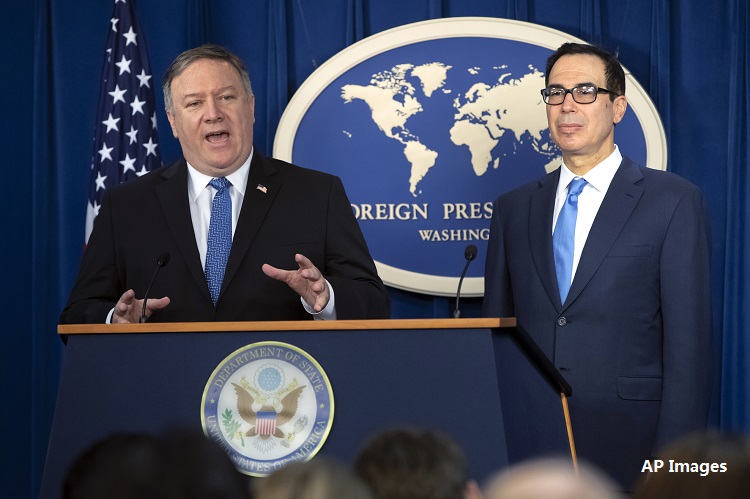 SECRETARY POMPEO:  … Earlier this year, President Trump withdrew from the fatally flawed nuclear deal and implemented a new campaign aimed at fundamentally altering the behavior of the Islamic Republic of Iran.  This part of the campaign about which we’re speaking today is simple.  It is aimed at depriving the regime of the revenues that it uses to spread death and destruction around the world.  Our ultimate aim is to compel Iran to permanently abandon its well-documented outlaw activities and behave as a normal country.

Today, Secretary Mnuchin and I will discuss one of the many lines of effort to achieve these fundamental changes in the Iranian regime’s behavior as directed by the President.  While important, these economic sanctions are just a part of the U.S. Government’s total effort to change the behavior of the Ayatollah Khomeini, Qasem Soleimani, and the Iranian regime.

On November 5th, the United States will reimpose sanctions that were lifted as part of the nuclear deal on Iran’s energy, ship building, shipping, and banking sectors.  These sanctions hit at the core areas of Iran’s economy.  They are necessary to spur changes we seek on the part of the regime.

In order to maximize the effect of the President’s pressure campaign, we have worked closely with other countries to cut off Iranian oil exports as much as possible.  We expect to issue some temporary allotments to eight jurisdictions, but only because they have demonstrated significant reductions in their crude oil and cooperation on many other fronts and have made important moves towards getting to zero crude oil importation. These negotiations are still ongoing.  Two of the jurisdictions will completely end imports as part of their agreements.  The other six will import at greatly reduced levels.

Our laser-focused approach is succeeding in keeping prices stable with a benchmark Brent price right about where it was in May of 2018 when we withdrew from the JCPOA.  Not only is this good for American consumers and the world economy, it also ensures that Iran is not able to increase its revenue from oil as its exports plummet.  We will, we expect, have reduced Iranian crude oil exports by more than 1 million barrels even before these sanctions go into effect.

This administration is treating condensate the same as crude since the regime makes no distinction between the two when it decides to spend its oil revenue on unlawful ballistic missiles, terrorism, cyberattacks, and other destabilizing activities like the assassination plot Denmark disclosed this past week.

And starting today, Iran will have zero oil revenue to spend on any of these things.  Let me say that again.  Zero.  One hundred percent of the revenue that Iran receives from the sale of crude oil will be held in foreign accounts and can be used by Iran only for humanitarian trade or bilateral trade in nonsanctioned goods and services.

These new sanctions will accelerate the highly successful effects of our sanctions that have already occurred.  The maximum pressure we imposed has caused the rial to drop dramatically, Rouhani’s cabinet is in disarray, and the Iranian people are raising their voices even louder against a corrupt and hypocritical regime.

On that note, our actions today are targeted at the regime, not the people of Iran, who have suffered grievously under this regime.  It’s why we have and will maintain many humanitarian exemptions to our sanctions including food, agriculture commodities, medicine, and medical devices.

I will now turn the call over to Secretary Mnuchin.

SECRETARY MNUCHIN:  Thank you very much.  Since the beginning of the Trump administration, the Treasury Department has been committed to putting a stop to Iran’s destabilizing activities across the world.  We’ve engaged a massive economic pressure campaign against Iran, which remains the world’s largest state sponsor of terrorism.  To date, we have issued 19 rounds of sanctions on Iran, designating 168 targets as part of our maximum pressure campaign.  We have gone after the financial networks that the Iranian regime uses to fuel its terrorist proxies and Hizballah and Hamas, to fund the Houthis in Yemen, and to support the brutal Assad regime in Syria.

The 180-day wind-down period ends at 11:59 p.m. Eastern Standard Time on Sunday November 4th.  As of Monday November 5th, the final round of snapback sanctions will be enforced on Iran’s energy, shipping, shipbuilding, and financial sectors.  As part of this action on Monday, the Treasury Department will add more than 700 names to our list of blocked entities.  This includes hundreds of targets previously granted sanctions relief under the JCPOA, as well as more than 300 new designations.  This is substantially more than we ever have previously done.  Sanctions lifted under the terms of Iran’s nuclear deal will be reimposed on individuals, entities, vessels, and aircraft that touch numerous segments of Iran’s economy.  This will include Iran’s energy sector and financial sectors.  We are sending a very clear message with our maximum pressure campaign that the U.S. intends to aggressively enforce our sanctions.  Any financial institution, company, or individual who evades our sanctions risks losing access to the U.S. financial system and the ability to do business with the United States or U.S. companies.  We are intent on ensuring that global funds stop flowing to the coffers of the Iranian regime.

I want to make a couple of comments on the SWIFT messaging systems since I’ve received lots of questions about this over the last few weeks.  So I’d like to make four points.  Number one, SWIFT is no different than any other entity.  Number two, we have advised SWIFT the Treasury will aggressively use its authorities as necessary to continue intense economic pressure on the Iranian regime, and that SWIFT would be subject to U.S. sanctions if it provides financial messaging services to certain designated Iranian financial institutions.  Number three, we have advised SWIFT that is must disconnect any Iranian financial institution that we designate as soon as technologically feasible to avoid sanctions exposure.  Number four, just as was done before, humanitarian transactions to nondesignated entities will be allowed to use the SWIFT messaging system as they have done before, but banks must be very careful that these are not disguised transactions or they could be subject to certain sanctions.  Thank you very much.

SECRETARY POMPEO:  …. We are not allowing the continued work to develop nuclear weapons and nuclear weapons systems in Arak and Fordow.  We will provide on Monday a complete explanation of what we’re going to do with the continued efforts to prevent those facilities from doing the things that put the world at risk through proliferation, and we’ll give you all the detail.  It’s a long and complex answer, but we’re happy to provide it to you on Monday morning.

SECRETARY POMPEO:  ….  Make no mistake about it, the Iranians will do everything they can to circumvent these sanctions – that’s unsurprising to me.  They’ll turn off ships, they’ll try and do it through private vessels, they’ll try and find third parties that don’t interact with the United States to provide insurance mechanisms.  The list of Iranian efforts to circumvent these sanctions is long.  You should all recognize there’s a reason for that.  These sanctions are far tougher than the sanctions that have ever been imposed on the Islamic Republic of Iran.  That is why they are so desperate to find ways to circumvent it.

And I won’t speak to our efforts to counter those circumvention efforts.  There are many, they are varied, and make no mistake:  The United States is fully prepared to do all that we can to prevent Iran from circumventing not only the crude oil sanctions and the financial sanctions, but all of the designations and all of the other sanctions that are being re-imposed this coming Monday and those that are already in place.