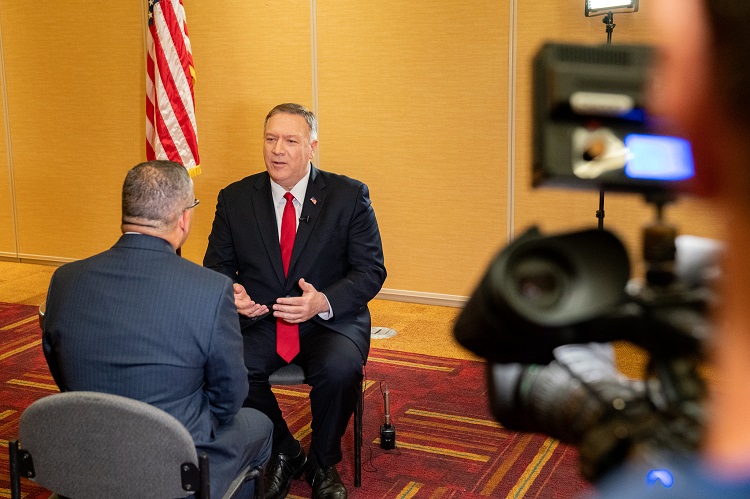 SECRETARY POMPEO:  So any time there’s difficulty, anybody – any time there’s a job loss or someone’s got a little bit harder time on their farm, President Trump regrets that.  But we came in with a China that was on the rise.  I come from Kansas.  I watched for half a decade – when I served as a member of Congress, I watched China have closed markets, deny our access to our products, our good, quality, high-end wheat and corn and soybeans, all the things we make in the heartland here.  President Trump is doing his best to reverse that.  And I’m confident – I’m confident we’ll get to a place where China will once again recognize the great value that is delivered by American farmers and continue to purchase the goods from right here in places like Indiana.

SECRETARY POMPEO:  President Trump’s focused on making it happen as quickly as possible.  I think there’s been real progress made, but I don’t want to set a timeline.  If there’s one thing I’ve learned as Secretary of State, these things sometimes are complicated.  There’s bumpy roads.  But I’ve watched our team.  We are focused on this.  We have to get China to allow reciprocal trade so that not only the farmers’ products but the intellectual property that underlays them, all of the processes that create value from Indiana farmers – all those things need to be protected from Chinese aggression and Chinese theft.

SECRETARY POMPEO:  … .  I watched China not take our products for years and indeed decades under Republican and Democratic administrations alike.  President Trump is determined to fix that.  He simply wants a fair and reciprocal trade relationship so Indiana farmers can sell their products, so Indiana manufacturers can sell their products into China, so Indiana companies can invest in China, the same way that Chinese companies invest in Indiana.  That’s pretty simple, it’s pretty straightforward – just fair, equal, reciprocal.  Those are the ideas that President Trump is driving towards, and we hope that China will see it that same way and we can achieve that outcome.  We are aimed at doing that just as quickly as we possibly can.

SECRETARY POMPEO:  In the business I’m in now, I try not to set timelines.  But know, and the Indiana people should know, that we’re working every day on this problem set – not only the State Department, but the Trade Representative, the Treasury Department, all of the folks that are involved in America’s trade and economic relationships.  We’re working to grow America, to create jobs.  The President’s very proud of the incredibly low unemployment rate all across America.  Those are things we’re proud of, we think they’re great accomplishments, and we’re confident that our efforts will continue to be successful in that regard.

SECRETARY POMPEO:  Well, the trade negotiations are primarily not mine.  They belong to the Trade Representative and Treasury, but I’m involved in a lot of negotiating.  I’ve been working with Chairman Kim in North Korea, working to deliver a good outcome in Afghanistan on behalf of the very people I’m going to speak to today, here at the American Legion, our great veterans, our soldiers, sailors, airmen, Marines.  President Trump provides us with the background, the direction, the principles which guide us – the aims to which our negotiations are aimed and are set, and we work diligently to deliver on behalf of President Trump to get what he’s looking for – what he promised the American people he would do to deliver better security for the American people.

SECRETARY POMPEO:  The President’s taken the strongest stance in an awfully long time on North Korea.  We didn’t get to this situation in the two and a half years that President Trump’s been in office.  The North Koreans built out their nuclear program over the years that preceded us, and what President Trump that’s done has been unique is to build out a global coalition. We have Security Council resolutions that have put real pressure on North Korea, global – global sanctions, not American sanctions, sanctions that the entire world asked a simple thing:  We asked North Korea to get rid of their nuclear weapons and to denuclearize.  When they do that, the President’s made pretty clear there’ll be a brighter future for the people of North Korea.  I hope that Chairman Kim will work with – put his team in the field to work with my team and deliver a good, solid outcome for the American people.

QUESTION:  I want to talk about the trade war as well.  The President at the G7 this past week – obviously, a lot of talk about trade and China.  Farmers here in Indiana have really been struggling this year.  You recently told a group of business executives that you think the trade war with China could come to an end by next year’s election.  Are those talks ongoing, and how are they progressing?

SECRETARY POMPEO:  President Trump took on a challenge that I knew well.  I served as a member of Congress from Kansas, another farm state, where we grew wheat and corn, all of the kinds of things we do here in Indiana as well, and I watched.  I watched China block our products from being sold.  And I watched Europe, too, deny our high-quality farm products access to their markets, and President Trump is determined to fix that, to the great benefit of farmers and working-class manufacturing people – I ran a small manufacturing business in Kansas – manufacturing people all across America.

So we’re working to fix it.  The timeline’s always difficult to predict, but make no mistake about it:  President Trump is out making sure, fighting on behalf of those who want to serve those markets that have been unfairly displaced by the fact that China just wouldn’t permit our products to move in.  And frankly, when they did take our products, they stole the intellectual property that underlays them.  We’re going to fix those things.  These are tough fights.  President Trump is determined.

SECRETARY POMPEO:  The focus inside the administration is really very plain.  It is to get a good outcome for American workers and for American farmers.  That’s it.  There’s a lot of noise, lots of folks saying things, talking about different things, but our efforts are very focused.  We know the things that China must do to open those markets and permit our companies to trade in a fair and reciprocal way.  If your company wanted to invest in China, it couldn’t do so in the same way a Chinese company could invest in America.  That’s not right; it’s not fair to American workers.  President Trump’s going to fix it.

SECRETARY POMPEO:  … . [W]e’re determined to make sure that no country, whether it’s Iran or North Korea or China or Russia, interferes in the next election.  We were pretty successful in the 2018 election, and I’m confident we’ll be successful in 2020 as well.